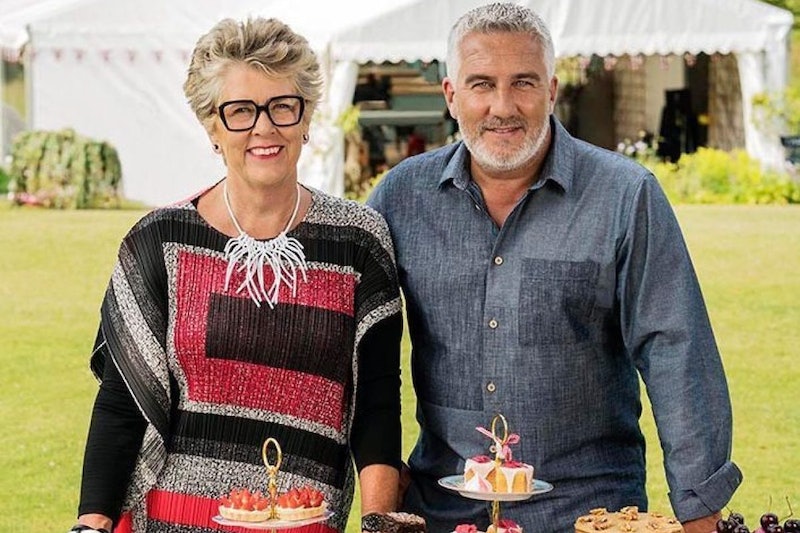 Get ready. Get set. Baaaake! You guessed it, it's that time of year again. Time for fans of confectionary delights can tune in and watch ordinary people cook up a storm. And when I say ordinary people, I mean the finest home bakers in the nation. Coming together to create, bake, design, and of course sometimes accidentally muck up some seriously tricky goods. It's impossible to get fed up of a top notch show like this and guys a first look pic of Great British Bake Off 2019 is here and it's lit AF.

Yes, on Tuesday Paul Hollywood shared a snap of himself, fellow judge Prue Leith, and co-hosts Sandi Toksvig and Noel Fielding to his Instagram page. And by all accounts, this photo bodes well for the next season of the foodie competition.

The quartet are stood in a beautiful bluebell meadow at their very own Madhatter's tea party. Not so surprisingly, the one wearing the super avant garde hat is Fielding. But the other three look dapper AF in their outfits too. Leith's dress is as green as a Viscount biscuit wrapper. Toksvig is coming through in a fab dark red velvet number with a ruffly shirt. And Hollywood is doing his best James Bond impression in a very smart tux.

This is some seriously exciting imagery that's sure to add more fuel to the fire that's in every fan's belly ahead of the new season. Especially after the trailer for the show that dropped at the end of July.

The trailer shows all kinds of potential bakers hitting the shops like a plague of locusts in a desperate bid to get all of the ingredients to bake up an actual storm. And from the looks of the attempts made by these individuals — they may not actually be that suited to the baking world. However some of them, including a drag queen, an astronaut, and lots of hungry children, look dead keen on snarfing any cake in sight — something I can fully support. And all this news is being reported by the very accurately named (fictional) reporter, Victoria Sponge.

Channel 4 has yet to announce a launch date for the new series, but fans are undoubtedly getting thirsty AF for their favourite foodie competition to get going. We want to see how decent the nation's best are at filling profiteroles, how brilliant they are at making a buttery biscuit base, and of course how adept they are at avoiding a soggy bottom.

Can you believe that it's about to be season 10 of the hit show? And boy oh boy how far it's come since it began all those years ago. Not only has it produced incredible talent like winners Nadiya Hussein and John Whaite but it's also had a big cast rejig. Yes, after the show moved from the BBC to Channel 4, sadly Mary Berry and hosts Mel & Sue jumped ship. However, Leith, Fielding, and Toksvig have stepped up to the (dessert) plate. Meaning that this season is going to be just as good as past seasons, if not better.