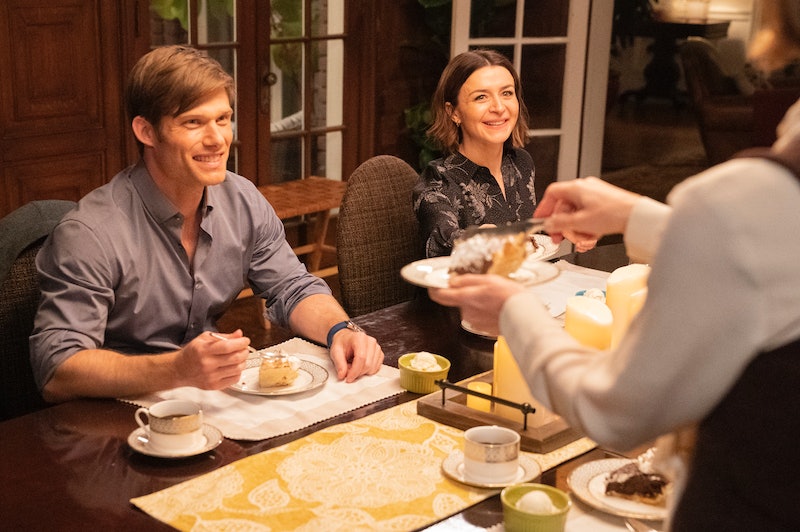 Amelia's been going through a lot lately on Grey's Anatomy. Breaking up with Owen may not have been easy, but she felt it was the right thing to do, and her frequent hookups with the hot new doctor Link are certainly a welcome distraction — that is, until they find themselves in an unexpected Meet the Parents situation. This exclusive Grey's Anatomy clip teases Amelia's awkward family reunion with her sister Nancy Shepherd, played by returning guest star Embeth Davidtz, and the first meeting between Link and Amelia's family. In the scene from April 11's Amelia-focused episode "Good Shepherd," Amelia introduces Link to her sister — sort of. Unfortunately, she doesn't introduce the man standing next to her as Link — she introduces him as her husband, Owen.

Amelia has never had the strongest relationship with her siblings apart from Derek, so telling Nancy the truth about her breakup with Owen isn't exactly high on her to-do list. Hence where Link comes into the picture. He's handsome. He's charming. He makes for the perfect fake husband to lord over her sister — so long as he's willing to keep the lie going. And from the look of things in the clip, he seems more than up to the challenge. Though given that this is Grey's Anatomy we're talking about, it's only a matter of time before the truth eventually comes out. But for those who are currently shipping this Amelia and Link romance, this should definitely make for a fun storyline.

Back in February, it was announced that Grey's had cast Amy Acker to play Derek's fourth sister, Kathleen Shepherd, who would be appearing on the show for the first time this season. The sneak peek only shows Amelia coming face-to-face with Nancy, but that won't be the only reunion in the episode. Thursday's episode will find Amelia and Link attending dinner at Nancy's house along with Kathleen, and if the official photos for the episode are any indication, the formal pleasantries will go by the wayside pretty quickly.

The photos from "Good Shepherd" seem to show a pretty intense conversation happening between Link, Amelia, and Nancy. Thankfully, Link appears to be just as upset with Nancy as Amelia is, which implies that he's on her side and standing up for Amelia in front of her sisters. Not that Amelia isn't more than capable of fighting her own battles, of course, but it's nice to know that he's in her corner and backing her up if she needs/wants it.

So while things may seem cordial enough in the clip, rest assured that it won't stay that way for long. When it coms to drama, Grey's Anatomy is never in short supply, but this Amelia-centric episode will certainly be one for the books. Perhaps it'll even bring her and Link closer together and help her to realize that she doesn't need validation from her siblings in order to do what's best for her.

Amelia has overcome so much over the last several years. She deserves love and support from her family. Whether she ends up getting it, however, remains to be seen. Needless to say, though, this is looking to be a must-see episode Grey's fans won't want to miss.