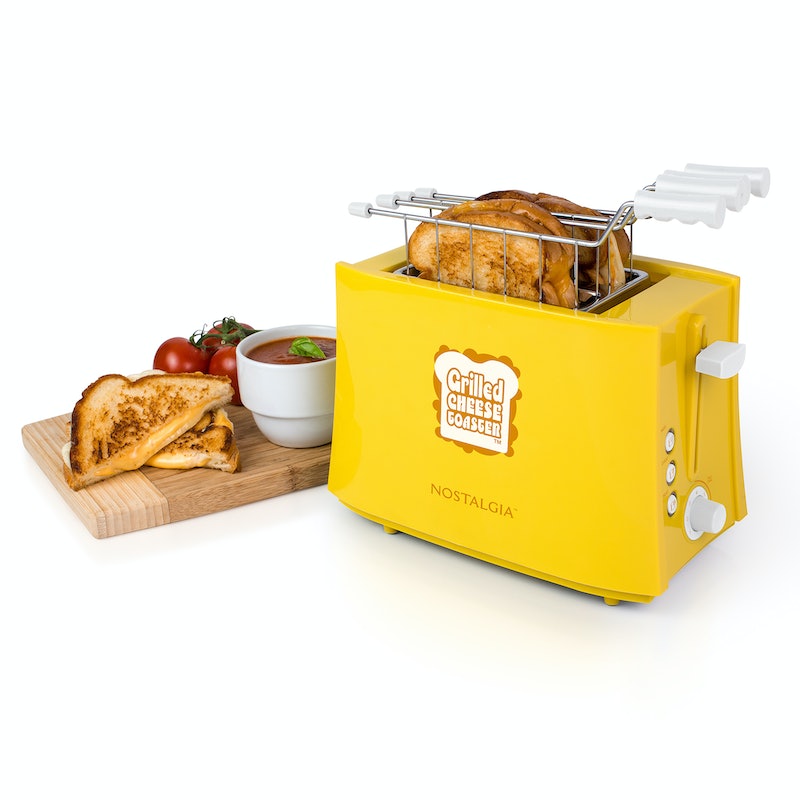 We’ve all seen that “kitchen hack” that involves turning a toaster on its side and putting a piece of bread with cheese on it inside in order to make an open-faced grilled cheese, right? Pro-tip: Don’t do that; it’s a major, major fire hazard. Instead, get yourself a grilled cheese toaster. Yes — that is a thing that actually exists. It’s called the Nostalgia TCS2 Grilled Cheese Sandwich Toaster, and it can be yours for the low, low price of $19.99 on Amazon. I had no idea this thing existed until, oh, about five minutes ago, and even though I’d be willing to bet that it doesn’t work totally as expected, I desperately, desperately want one now.

Made by the company Nostalgia Products, the Grilled Cheese Sandwich Toaster looks simple enough to use: First, you assemble your sandwich; then, you pop it in one of the toasting baskets, which will hold your sandwich in place while it’s cooking, as well as catch any grease or cheese drips that develop during the toasting process; next, you adjust the toasting dial to make sure your sandwich will come out exactly as you like it; and voila! In a few minutes, out pops a made-to-order grilled cheese. Or, y’know, two made-to-order grilled cheeses, because it’s capable of making sandwiches in pairs. Here’s what it looks like in action:

As intrigued as I am by this thing, though, I will admit to being somewhat skeptical. I mean, I know the toasting baskets are ostensibly there to prevent toaster explosions due to melted cheese or whatnot — but, toasting baskets or no toasting baskets, part of me just can’t help but look at this device and go, “…But… how does the cheese not get everywhere???”

Apparently, though, it works just fine. Indeed, This Is Insider recently pitted the Nostalgia TCS2 Grilled Cheese Sandwich Toaster’s results against a classic grilled cheese sandwich made on the stove — and the verdict was that it was actually pretty good! The toaster sandwich ended up both crispy and tasty (and, unlike the stovetop sandwich, didn’t get burned); however, the This Is Insider team did also admit that you’re probably only going to get a lot of use out of the thing if you really, really love grilled cheese. If you’re just an occasional grilled cheese eater, you likely don’t need an appliance whose sole purpose in life is to make grilled cheese.

For what it’s worth, though, reviews of the device on Amazon are somewhat mixed; people seem to either absolutely adore it, or loathe it with the passion of a thousand fiery suns. Four- and five-star reviews include one titled, “It really is as easy as it sounds,” whose user noted, “I am never using a stove again when my kids want a grilled just because it is easier and more efficient to use this Grilled Cheese Sandwich Toaster”; one whose writer said, “I LOVE this thing. It works really well. I put a little bit of butter on the outside of the sandwich and it crisps it perfectly”; and one by a user who apparently tried to make quesadillas in it and was delighted to find that “they turned out perfect!”

Other reviews, however, were a bit less complimentary. Common complaints include the size of the slots, with one reviewer noting that they were “barely enough for normal sized bread with a couple pieces of cheese”; that it’s “sloppy”; and that it sometimes cooks unevenly. (As a counterpoint, though, the folks who gave the device higher reviews noted that the device can cook evenly; it just takes a little bit of adjusting to find the right settings.)

One particularly fascinating review seems to vacillate back and forth between negative and… well, maybe not positive, but observing that there are some things the Grilled Cheese Sandwich Toaster is meant to do and some things that it’s just… not. Here is that review in its entirety:

“I wouldn't USE it as a casual sandwich maker. That is not the Nostalgia TCS2 Grilled Cheese Sandwich Maker's job. It makes grilled cheese, not a casual sandwich. And by grilled, I mean one side of the bread is still pale, while the other one looks like it barely survived a house fire. (Exaggerations may be used in this.) It takes a while to get the hang of, and its not like the cheese turns into a gooey glue. No no no. The cheese gets a little bit gooey, but you can still see its square shape and remove it from the bread easily without stickage. And with its cheap looking appearance, its most likely going to stay in your pantry, away from your eyes-and from the sandwiches.”

(The Amazon page for this thing is full of other little gems, by the way, including a question in the Q&A section that just reads, “Will this make me a better dad? If not I won’t buy it.” Truly, this exploration of the Nostalgia TCS2 Grilled Cheese Sandwich Toaster turned out to be a far stranger journey than I had anticipated it being.)

Lest you remain somewhat unimpressed by the Grilled Cheese Sandwich Toaster, though, fear not; Nostalgia Products makes a huge array of hilarious devices to suit pretty much every food preference. It’s true that some of them are likely to be more useful than others — personally, for example, I probably wouldn’t get much use out of a Vintage Cotton Candy Cart, but the Bacon Express Crispy Bacon Grill? I mean, it’s basically a bacon toaster, which I would definitely use every dang day — but they’re all pretty entertaining, as well as wonderful conversation pieces.

If anything, Nostalgia Products proves that you can cook anything in a toaster if you just believe in it enough.

Is it lunchtime yet? Please tell me it’s lunchtime. I, uh... really need a grilled cheese right now.

More like this
I Tried The $20 TikTok Viral Oishii Strawberries — Here's What I Thought
By Sophie Hanson
On TikTok, A ‘Snackle Box’ Is The Best Way To Pack Charcuterie On-The-Go
By Meguire Hennes
Trust Me, Pickle Martinis Are The New It Drink Of The Season
By Emma Carey
13 Selfie Instagram Caption Ideas That Exude Main Character Energy
By Jessica Booth and Emma Carey
Get Even More From Bustle — Sign Up For The Newsletter