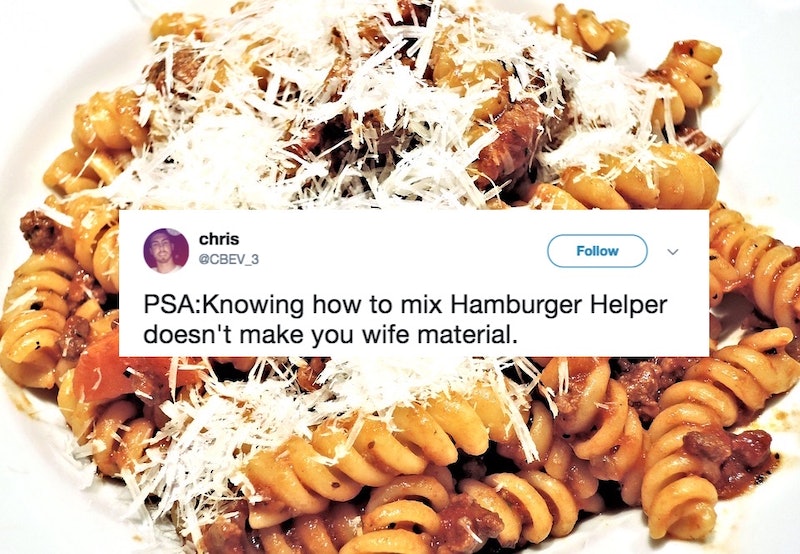 It’s a tale as old as time. Some dude tries to make a bad joke on Twitter and the internet goes, “NOPE PASS.” This time, however, the one leading the resistance was none other than the official Hamburger Helper brand account. Yes, Hamburger Helper called out sexism on Twitter because we get the heroes we deserve, I guess. Hamburger Helper is feminist now and that anthropomorphic glove is here to slap the misogyny right out of you.

On Monday night, a Twitter user named Chris posted a screenshot from Snapchat showing a pan of Hamburger Helper and the caption “wife me.” In an apparent attempt to make fun of the woman who sent the initial Snapchat, Chris shared the photo on Twitter, adding, “PSA: Knowing how to mix Hamburger Helper doesn't make you wife material.” Because it is literally someone’s job to comb through complaints against their brand Twitter, Hamburger Helper saw the tweet and with it an opportunity to become the least sexist boxed meal on the internet. Step up your game, Kraft Macaroni and Cheese.

Years from now, your children and your children’s children will turn to you and ask, “Where were you when an adult man got severely owned by the Hamburger Helper glove?” And you will try to respond but begin to laugh forever at the absurdity of it all and spontaneously combust into a million tiny egg noodles and powdered sauce packets.

Hamburger Helper’s response has been retweeted over 43,000 times and has more than 160,000 likes. Who would have known, years ago, the thing that would make us love Hamburger Helper was how well it pairs with smashing the patriarchy? If only our parents could have been like, “Eat up. This stroganoff is going help combat gender roles.”

The internet seems to be a bigger fan of the brand’s response than the initial tweet. Good old Hamburger Helper. Bringing the world together.

Perfecting the brand clapback is essentially a basic tenet of marketing now. Last year, Wendy’s responded to a person on Twitter who questioned their “fresh, never frozen” slogan. (Wendy’s basically had to explain what a refrigerator was.) Wendy’s has also previously roasted McDonald’s when they announced they’d be making their Quarter Pounders with fresh beef starting in mid-2018. (Wendy’s was skeptical, especially since they’d been using fresh beef since 1969.)

Brands trying to tie themselves to a social cause is also nothing new. It, too, has become something of an advertising staple. However, many brands misstep when trying to appear socially conscious. It’s difficult not to appear opportunistic when trying to support a cause seemingly disconnected from your brand. And consumers can sniff out pandering. While it’s encouraging that something like calling out a sexist joke is marketable (or at least won’t presumably lose a brand any followers), it dances a fine line between being genuine and simply trying to be “on trend.”

Regardless, calling out sexism is a welcome relief from the cesspool of misogynistic harassment Twitter can often be. (And make no mistake: Twitter continues to be rampant with abuse, specifically targeted at its female users.) Even if it’s done by a brand in attempts to be #Feminist or perhaps just #SavageAF (#ad #spon), holding people accountable for their coded and overt sexist language is necessary.

Research has shown that sexist jokes normalize sexist behavior. Humor that hinges on stereotypes, specifically about those who are already societally oppressed, isn't really good comedy. It's cheap and overdone. Words matter. And if a giant white glove with a face serving up meaty goop needs to remind you of that, so be it.