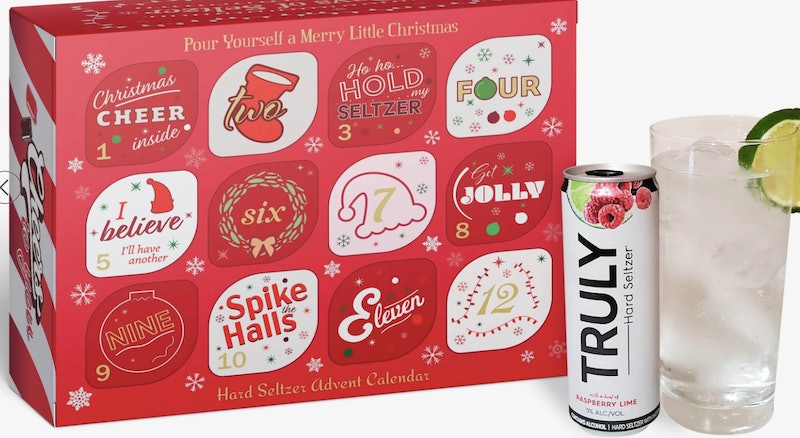 The Summer of Canned Hard Seltzer may be over, but canned hard seltzer's reign has apparently only just begun. Craft beer gift basket website Give Them Beer is launching a Hard Seltzer Advent Calendar for 2019, which includes 12 cans of hard seltzer for each of the 12 days of Christmas. The company will start shipping them out in November 2019, but supplies are limited — and if the White Claw shortage that is now plaguing house parties all over the nation is any indication of how fast it will go, you'd be best to preorder yours now.

As for which brands in particular will be in the advent calendar, Give Them Beer is cultivating the mystery. In order not to spoil the advent calendar's contents, they've only revealed a few of the brands that will be included — namely, White Claw and Truly, two of the most recognizable hard seltzers on the market. However, they also tell customers to "rest assured that the seltzers included have been hand-selected to include a variety of brands and flavors from across the U.S. that actually taste good."

The calendar is a bit steep at $89 — according to my arch nemesis math, that's approximately $7.50 per hard seltzer — but that price also comes with the opportunity to try new varieties you might not have explored on your own, plus box full of festive sayings like "Spike The Halls" and "Ho Ho Hold My Seltzer." If that tradeoff is worth it to you, then you, my friend, are in the target audience of what is boasting itself as the "first-ever" advent calendar of its kind.

If you're not already familiar with the hard seltzer fandom, you're not alone — its popularity seems to have snuck up on a lot of us. Only toward the end of the summer of 2019 did the aforementioned nationwide shortage of White Claw, a popular hard seltzer brand, bring to our attention just how beloved the emerging form of alcohol had become. Its success was perhaps inevitable — our obsession with hard seltzer sits on the shoulders of our previously established obsession with LaCroix, Spindrift, and other popular seltzers — but for something that is can essentially be reduced to alcohol watered down by flavored sparkling water, it sure has taken off. In fact, a USB analyst predicted to Business Insider that by the summer of 2021, hard seltzer could have a valuation of $2.5 billion — a hefty leap from its current $550 million. Stick that in your advent calendar and chug it.

Maybe it's the drinkability factor, or the lower ABV (hard seltzer tends to clock in around 5%), or just the sheer convenience of drinking something out of a can that tastes fruitier than beer. But whatever the case, it seems that hard seltzer's on a rollercoaster that's only going up. That rollercoaster now includes an entire advent calendar, so get your hands on it while you still can — otherwise you'll just have to keep drinking canned wine like it's 2018.