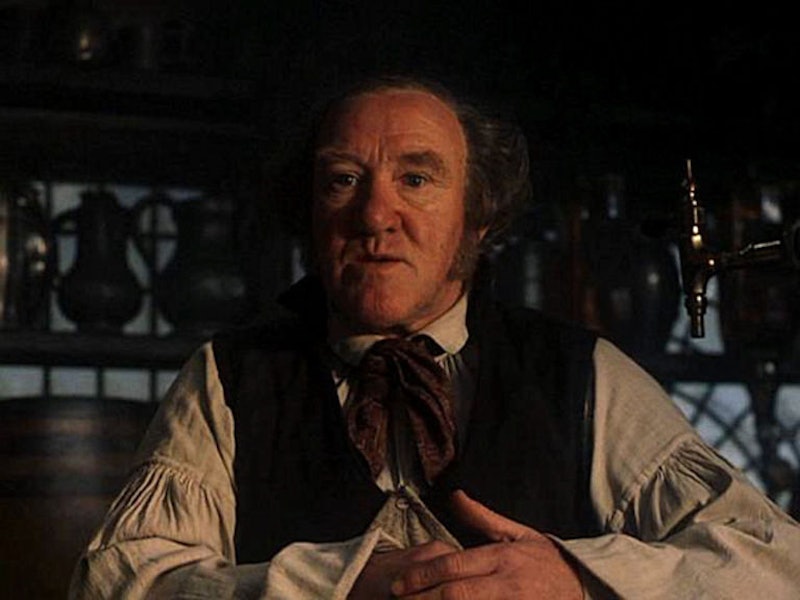 Realistically speaking, you've watched the Harry Potter films so many times that every character — wizard, witch, even those freakish looking bank goblins — has become your intimate friend. But this should warp your magical world a little bit: Seventeen recently discovered one Harry Potter character whose actor changed mid-series. No, not Albus Dumbledore. Or Lavender Brown. Or Angelina Johnson. Or — OK, listen, this time we're talking about about Tom.

OK, let's back track. Do you remember how, in Sorceror's Stone, Hagrid and Harry go to Diagon Alley, and, among their adventures, the half-giant takes our lad to the Leaky Cauldron (for like, what, chips and a pint)? The innkeeper, Tom, remarks, "Ah, Hagrid! Usual, I presume?" But Hagrid isn't messing around, he's on official Hogwarts business with Harry freaking Potter, and those customers absolutely lose it over the famous long-lost Boy-Who-Lived-In-A-Cupboard.

Anyway, Tom himself is a somewhat elderly gentleman with dark gray hair and muttonchops, low-key dressed like it's the 1700s. He seems amiable and regards Hagrid like a regular (because Hagrid probably is). Everything's totally fine, we're living in a world of wonder and magic, and Harry quickly moves on to Diagon Alley anyway since he's not even old enough to drink yet.

Anyway, that's the image I want you guys to keep in mind, because, when our hero rolls out to the Leaky Cauldron two years later, he's dealing with a completely different person.

To backtrack a little here, Harry ends up running away after blowing up Aunt Marge, and the Knight Bus leaves him at the Inn. Cornelius Fudge is waiting for him, very, very happy Harry hasn't been offed by Sirius Black, and says, "Tom will show you to your room." And then this Igor-esque person emerges from the shadows.

Now, there are two things worth noting with this, and the first is that these are two different actors. It isn't just the same dude with a shaved head and a fresh new murder-y vibe. The second thing worth mentioning is the possibility is that it's just two employees with the same first name, which certainly is a less crazy theory. I once worked at a Victoria's Secret with three Nicholes. Maybe Tom was just the Nichole of whatever-that-year-was. Again, we already know this dude isn't the only Tom in the series.

But, eh, that sort of takes the magic out of this reveal, doesn't it?