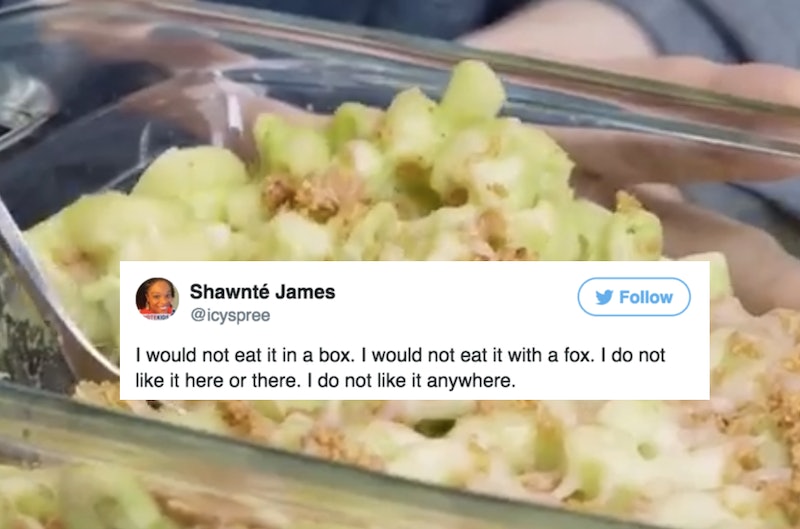 Politics, legalizing recreational use of marijuana, avocado — three things people are very sensitive about. The latter of the three is particularly under the spotlight at the moment, after a controversial "healthy" avocado mac and cheese recipe went viral and outraged the masses, who feel that this has just crossed the line and gotten downright inappropriate.

Here's what happened: there's a Twitter account called @TheFitFood. They have a large following and post all kinds of mouthwatering creations. They recently shared this avo-mac-and-cheese recipe, where you swap out the cheese for an avocado puree mixture instead, and then top it with toasted almonds. Creative idea, right? Who doesn't love avocado? Who doesn't love some mac and cheese? The tweet went viral! Except for all the wrong reasons!

Tweeters seemed greatly perturbed that the classic comfort food was so unrecognizable after these well-intended alterations, and they minced no words in expressing their frustration. We're all for getting inventive with avocado — avocado hamburger buns, avocado ice cream, we might even add some in our smoothies or our chocolate mousse — but apparently there is a limit to our nation's avocado obsession, and that limit is called avocado macaroni and cheese.

Then there's the issue of calling this low-calorie, which... no.

You have to give them points for thinking outside the (macaroni) box; and for all we know, this could be delicious. But based on the responses of these flabbergasted tweeters, I don't think the poor mac and cheese even stands a chance.

If any of this feels reminiscent of avocado outrage of days past, it's because this isn't the first time someone tried to get fancy with avocado and was, in the words of Cher Horowitz, brutally rebuffed. #GuacGate2015 brought us a New York Times tweet telling us to add peas to our guacamole, and the internet was all, "Good day, sir. I SAID GOOD DAY."

Trust? Trust? Ours is broken. And trust is like a plate. You can try to put it back together, but you'll always be able to see the cracks. Or something like that. And if that plate is holding guacamole with peas? Forget it.

The avocado mac isn't quite on par with the above guacamole imposter, but it might be somewhere in the neighborhood. Between the nutritional value and the marrying of two food items who maybe don't want to be married, people aren't having it. We're in love with avocado. We love to put it in our hair. We love to put it on our faces. We love to send our friends avocado emojis. But avocado on pasta? To that, the internet says: