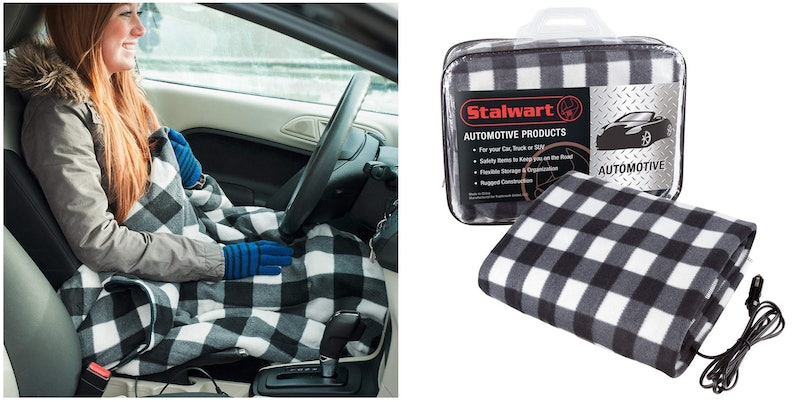 If you happen to live in an area that gets cold during the winter, you’re undoubtedly familiar with the struggles of warming up a cold car before you hit the road — but hey, guess what? It turns out there’s a winter car accessory that can solve that problem: Get yourself a heated blanket that plugs directly into your car. Now that the days are getting shorter, the leaves are past their peak, and the weather is growing chillier, this kind of electric blanket might be just what the proverbial doctor ordered — especially if you’re the kind of person who’s always cold, even when it’s, uh, not actually that cold out.

Best Products (via Cosmo) gets the credit for bringing this delightful little device to our attention. Made by utility product company Stalwart’s automotive division, the blanket is officially called the Stalwart 12 Volt Electric Blanket For Automobile; it comes in a variety of colors, including a couple of different plaids (Red! Green! Black and white!), and packs up easily when you’re done using it. Particularly for cars that might not be equipped with heated seats, it sounds like it would be quite the boon during the coldest months of the year.

The blanket is powered by the 12-volt direct current receptacle included in most cars — that is, the little socket we traditionally think of as holding and heating a cigarette lighter, but which has since become known more for its ability to power auxiliary electrical devices while your car is running. The 12V socket allows the wires and heating elements sandwiched in the center of the blanket to keep you toasty warm, while a fleecy exterior offers plenty of softness to snuggle up with. Also, the cord is a whopping 96 inches long — about eight feet — so you should be able to use it comfortably no matter where you’re actually seated in the car. Stalwart recommends using it for everything from emergency situations to tailgating — by which I mean the party kind, not the driving-up-someone-else’s-rear-end kind.

It’s also widely available. Amazon, Target, Walmart, JCPenney, Kohl’s, Home Depot, Wayfair, and Bed, Bath & Beyond all carry Stalwart’s products — and although the electric blanket isn’t always available at all of those retailers, it typically is for at least some of them at any given time. Prices do tend to vary, though, so you might want to do a little comparison shopping before you purchase. Right now, for example, the blanket will cost you $33.59 at Kohl’s, but only $20.97 at Home Depot.

Granted, I can't personally vouch for the efficacy of the blanket; however, reviews on Amazon are generally favorable, with the majority of users rating them four or five stars. Said one purchaser who had bought the blanket for their perpetually cold partner, “This is a GREAT travel blanket! She said it was very warm without even plugging it in. After she plugged it in to the 12v power outlet in the truck, she was in paradise.” Additionally, noted the buyer, “I have a big Dodge Diesel truck with two batteries, and I never noticed any strain on the batteries or truck while this was plugged in with the truck running and driving down the interstate, or stopped and the truck turned off.”

Another fan wrote that both their family and their dogs adore the blanket. “I bought five of these and gave them out as Christmas gifts,” they said. “My small dog loves the heated blanket on cold days. The first one I bought lasted about five years before it came up missing, I somehow think my kids had something to do with that!”

Of course, there are a few negative reviews, too; there always are. Said one reviewer, citing the lack of a temperature adjusting switch as a downside, “It’s fine, as a regular blanket. It’s horrible as an electric blanket.” Wrote another, “I really wanted to love this — I’ve been wanting a heated blanket powered by the cigarette lighter for road trips. However, the fact that it only has one heat is a huge disappointment — it gets too hot! I'd like it to stay nice and toasty, but not have to keep unplugging it.”

Stalwart also isn’t the only company that make 12V-powered heated blankets for your car, by the way. Other options include the Wellrest 3-in-1 Convertible Traveller Throw, the Trillium Car Cozy 2, and the TREKSAFE 12-Volt Heated Travel Blanket. Like the Stalwart blanket, these options (and many others!) are pretty widely available at major retailers.

Regardless as to the brand or variety that floats your boat, make sure you exercise basic electric blanket safety while using one of these devices. Check them regularly to make sure the fabric isn’t frayed or scorched and that there are no loose or faulty wires, exposed elements, or damp patches; don’t pile more than one electric blanket on yourself at once or lie on top of one; take care to store them properly; and don’t let them get too hot. (Burn and fires can be a concern with electric blankets.) Also, it might be wise not to use an electric car blanket if you’re the one behind the wheel, despite what the promo images for Stalwart’s blanket depict — it could cause distracted driving.

But if you’re a passenger? Plug in this sucker, snuggle up, and prepare for one cozy car ride. It doesn’t get much better than that!