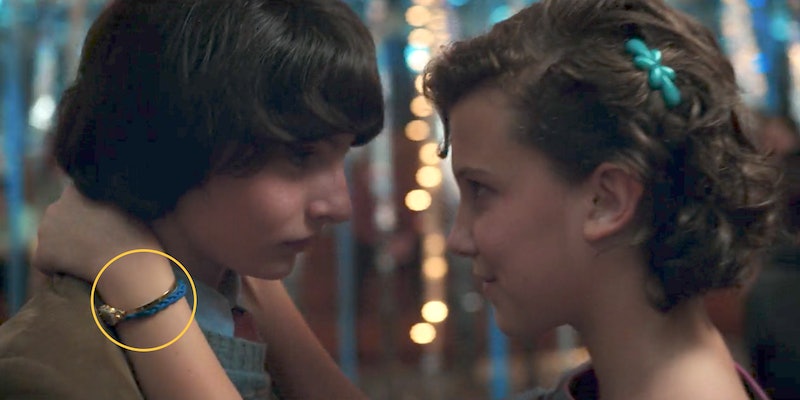 Jim Hopper's most memorable moment in Stranger Things 2 might be the dance moves that became an instant meme, but his journey as Eleven's surrogate father was the emotional crutch of the series. One of the most touching moments in their formed family is a small detail have gone unnoticed by fans the first go around. Spoilers for Stranger Things 2 ahead. Hopper gives Eleven his daughter's hair tie in Stranger Things 2 and if that doesn't make you well up, you're probably a Mind Flayer.

Towards the end of the season, Hop finally tells Eleven about his daughter Sara. In Season 1, we learned that Jim and his wife Diane divorced shortly after losing their young daughter Sara to cancer. He moved back to Hawkins and fell into the grumpy life of small town law enforcement that he inhabits when Stranger Things begins. What keen viewers like Eric Alpert on Twitter and other fans noticed then is that Hopper keeps a token from Sara on him at all times. The blue hair band that she was wearing in a flashback shows up around his wrist, or twisted through his fingers.

Not only is Hopper still wearing the hair tie in Stranger Things 2 — but he gives it to Eleven for the Snow Ball. This is just too much, way sweeter than the adoption papers, which may or may not become a conflict when Becky Ives finds out. That's a Stranger Things 3 problem. For now, let's focus on this gesture and how it shows that Hopper is slowly moving on and letting go of the demons from his past. It's a lovely small detail that informs the character and the world without drawing too much attention to itself.

In an interview with The New York Times, actor David Harbour talked about how it was never his intention to be "just a dad" in his career. There are many facets to him as a hero and as a father. “One of the things I’ve been interested in my whole career is exploring masculinity and what it means to be a man,” Harbour said. “The sensitivity of a man, but also the violence and power that goes along with it.”

That small blue hair tie is a perfect representation of the ways Stranger Things subtly challenges audiences with Hopper. First of all, the practice of wearing an elastic around your wrist is seen as overtly feminine — so much so that in 2015, Cosmopolitan published a "tough love" essay shaming women who do this for "ruining their outfit" with conveniently placed accessories. So Hopper, a traditionally masculine figure in most respects, is breaking gender norms just a tiny bit. It also challenges the kind of hero that he is. Plenty of heroes turn to action to avenge their dead children and/or wives and girlfriends. Too many, in fact. It's a trope that needs to end. Hopper wears his emotional trauma almost literally on his sleeve, but it doesn't define him. Finally, him giving it to Eleven at the dance is a sign of trust — something that fathers are stereotypically wary of giving in such social situations with teenage girls.

It also proves while people are so drawn to this series. Stranger Things may have gained monster fame with '80s throwback nostalgia, and endlessly charismatic young cast, and an adorkable dead girl who you probably claim to relate to more than you actually do.

However, it's small choices like Sara's hair band that really reminds us why this show works. At the end of the day, Stranger Things is a thoughtful show with rich characters who live in a supernatural world, but otherwise live honest and authentic lives. The attention to detail on this show is not always about Sean Astin making a Goonies reference or the perfect shot recreation of Close Encounters Of The Third Kind. Sometimes it's a simple blue hair tie that will make you burst into tears well after your Stranger Things 2 marathon has ended, and that's why fans simply can't get enough.