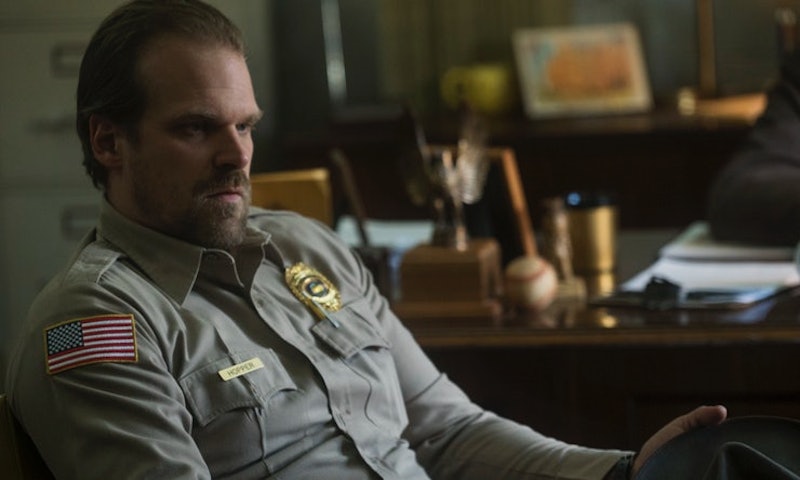 Stranger Things 2 premiered on Netflix this weekend, and some fans who managed to marathon through the brand new season were left with some...feelings. But not the kind of feelings you might imagine, since those feelings didn't have as much to do with the season's subject matter as they did have to do with one character in particular: Chief Hopper. Some Stranger Things fans are unexpectedly attracted to Hopper and they're hilariously sharing their thoughts about it on Twitter.

There are spoilers for Stranger Things Season 2 ahead. In case you're in need of a small refresher, the last season of the Netflix original saw Hopper aiding Joyce throughout the investigation of Will's suspicious disappearance. Toward the end of season he developed a bit of a bond with Joyce and the kids which unsurprisingly resulted in fans of the show hoping and praying that the two would somehow end up together. But the start of Season 2 proves that that dream in particular won't be coming true any time soon, since Joyce has a brand new love interest. Hopper may not be the object of her affection, but he sure does have a lot of people unexpectedly swooning over him on Twitter.

When tweeting about the show, some users had a rough time expressing their exact thoughts about their new...uhhhh...feelings towards Hopper.

But there were some people who got right to the point, and weren't afraid to do so. A word they commonly used to describe the character was "daddy."

And then there were those who seriously couldn't handle themselves any time Hopper came on screen. Guess this means they had a pretty hard time making it through the season, considering he is a major character and all.

And let's not forget about the people who took note of his anatomy and were thoroughly impressed.

Or those who just wanted to make sure that everyone watching the show is aware of his best qualities — including the fact that he's "daddy."

And lastly, this person who has some strange but interesting plans for the Chief that include a lot of beard touching and playing Dungeons and Dragons.

So, yeah. Apparently Hopper is a total babe, and people are just now beginning to realize it. It's quite possible that fans of the show are developing an attraction to Hopper because of his story line in Season 2, which appears to be a bit more complex. For one thing, he develops a closer relationship with our beloved Eleven, who we find out at the end of the first episode has been hiding out in his cabin in the woods. His bond with the character understandably has fans feeling all of the feels as does the fact that people would really like to see Hopper and Joyce profess their love for each other and live happily ever after — well, as happily as they can, considering all of the weird and evil forces that have been taking over Hawkins lately.

And, speaking of weird and evil forces, there's also the fact that even though Will is back, we'll still be seeing a lot more of the Upside Down. At some point in Season 2, Hopper ends up getting stuck in the creepy parallel universe, causing the boys to embark on a mission to save him.

You could blame people's attraction to Hopper on all of these things or you could simply chalk this up to the fact that he's "thick." Either way, let this be a sign of one of the many reasons why you should stop what you're doing and marathon through the second season of Stranger Things immediately.

More like this
'Bridgerton' S3 Teases Exciting Social Season For Penelope Featherington
By Bustle
Evan Peters Decompressed After 'Dahmer' By Watching This Will Ferrell Movie
By Grace Wehniainen
It May Be A While Before 'All American' Season 5 Drops On Netflix
By Grace Wehniainen
How Is The British Royal Family Related To The Romanovs?
By Karen Fratti
Get Even More From Bustle — Sign Up For The Newsletter