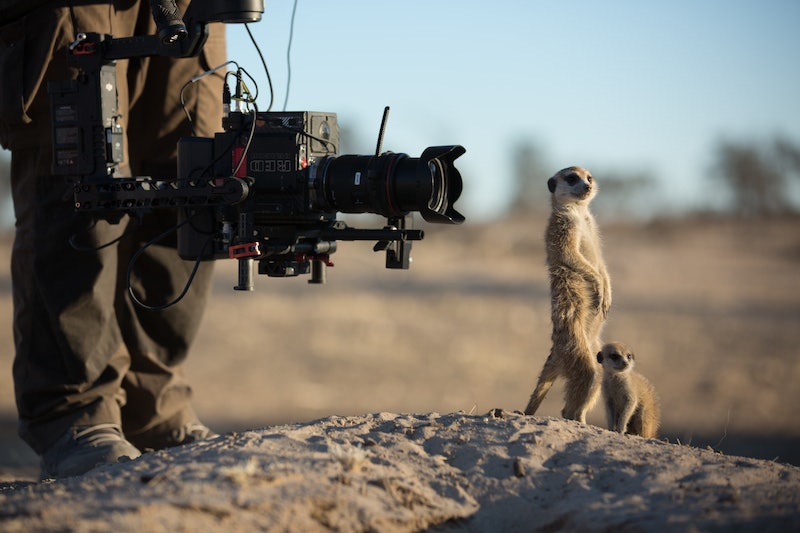 National Geographic's new nature docuseries Hostile Planet premieres on April 1, and as the name implies, it’ll transport you to the most inhospitable corners of the Earth. It's a look at how species have adapted to not only survive but also thrive in these extreme conditions that's so immersive, you likely won't be thinking about the hard work that goes into making a docuseries like this possible in the first place. Thankfully, executive producer Martha Holmes gave Bustle a behind-the-scenes look at Hostile Planet that will remind you that capturing footage from extreme habitats around the globe is anything but easy.

Hostile Planet's 245-member crew managed to cover animal behavior on all 7 continents, and each episode in the six-part docuseries hosted by Bear Grylls features a different habitat: deserts, grasslands, jungles, mountains, oceans, and polar environments. Though traveling the world while working alongside scientists to document such incredible feats of survival is an exhilarating task, it's hardly a glamorous job. “I mean, the travel is fun, but it’s incredibly hard work,” Holmes stresses. “It’s lovely to be out there in the field, but it’s very grueling.”

A seasoned wildlife documentary producer whose credits include Life and Blue Planet, Holmes knows that when it comes to making nature docs, it's necessary to expected the unexpected. If it gets too cold in the Canadian Arctic, for example, she explains that camera lenses can literally crack and new ones may need to be flown in. And keep in mind that these shoots can last anywhere from two to six weeks. Holmes goes on to recall one instance when temperatures were so frigid, a crew member’s hand was “slightly paralyzed” for months after the shoot.

To give you an idea of the patience required to create a docuseries like Hostile Planet, the 1,300 days of actual filming only scratch the surface of all the planning involved. Deciding which animals to film is also a challenging process in itself that requires close collaboration with scientists. Ultimately, the scientists steer filmmakers in the right direction by pointing out new animal behaviors that deserve special coverage. “You’re finding new stories and saying, 'Oh my god, we need to film that — that’s a new behavior,'” Holmes explains.

When you take this into account, along with pre-production and post-production, nature docuseries like Hostile Planet take anywhere between three to four years total to finalize, Holmes explains. “So, until the money’s gone, the time is gone, you’re always, always trying to find new stories and put in new ideas or see the bigger story of that habitat,” she emphasizes.

The behind-the-scenes process is captivating in itself, but Holmes doesn’t want Hostile Planet audiences to take the animals featured in the show for granted. “I’d hate for people to think that oh, they’re so resilient, we don’t have to worry about our changing world, our changing climate,” she says. “Actually, we’re really really pushing animals to their limit.” A 2018 report from The World Wildlife Fund for Nature backs up that statement. Scientists behind the report concluded that as the human population has continued to climb since 1970, wildlife populations have decreased by 60 percent.

At the same time, Holmes adds, the docuseries is just as much a “celebration of the resilience of the natural world.” Tom Hugh-Jones, who produced the series alongside Holmes, echoed that sentiment in a National Geographic press release describing the series. “We let the viewers endure the drama and triumphs directly through the eyes of the planet’s ultimate survivalists," he wrote. "We put them right in the heart of the action and worlds." As each new episode rolls out, you might be thinking about the action that takes place behind the camera, too.