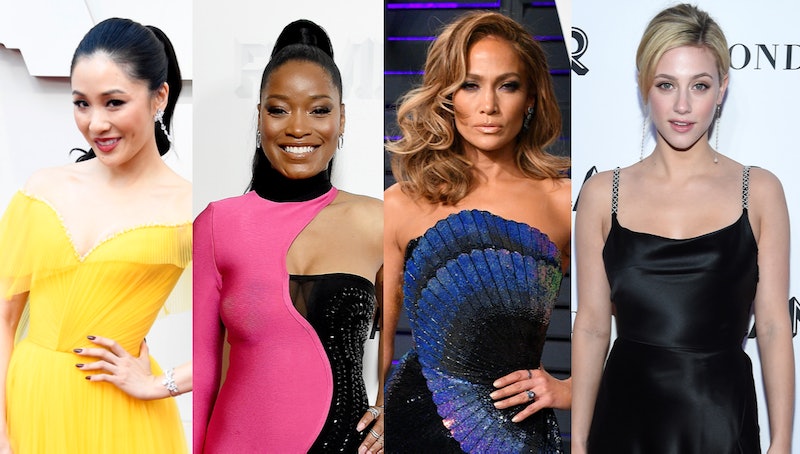 Jennifer Lopez, Keke Palmer, Lili Reinhart, and Constance Wu are going to show who has the real power in their new film Hustlers. But in a Hustlers behind-the-scenes video, it looks like these actors are already on top of the world. The video, seemingly taken by Palmer while they filmed on a rooftop in New York City, has the actors bonding over some wind-blown hair — and it will make you even more excited (if that's possible) for the upcoming movie.

Hustlers is based on the true story of strip club employees who stole from wealthy male patrons. Besides this epic foursome, the cast also includes Madeline Brewer, Julia Stiles, and freakin' Cardi B, making it already one of the most buzzed about movies of the year. So, while these women may be hustlin' men onscreen, it appears they are busy supporting each other offscreen.

Throughout her career, Lopez has long proven that you should never underestimate women. And as the star and producer of Hustlers, she's going to remind moviegoing audiences of that fact once again. And this time, she's brought a heavily female-led cast with her, including includes singer-actress Palmer of Scream Queens and Grease: Live, Riverdale star Reinhart, and Wu of Crazy Rich Asians and Fresh Off the Boat. And based on this short behind-the-scenes video, shared to Instagram by executive producer Elaine Goldsmith-Thomas, it's safe to say this group of leading ladies is ready to take on the world.

With the camera in hand, Palmer seems to embarrass Reinhart by zooming in on her. But it's all in the name of showing how the Riverdale actor "kills" — especially when her hair gets to be free and not in her signature slicked-back Betty pony. And Lopez also wants to join in on the fun by letting her hair blow in the wind. Meanwhile, the 25-year-old Palmer marvels at how the 37-year-old Wu "looks like a teenager."

If the behind-the-scenes video wasn't enough "hustle" for you, Goldsmith-Thomas also shared a behind-the-scenes photo. Taken by Goldsmith-Thomas, the photo shows the actors were rocking varying footwear during this outside shoot. Palmer and Reinhart are barefoot (hope there's a plot point to explain this since it looks pretty blustery up there) and Wu is wearing some incredibly comfy-looking slippers. But it seems no matter their chosen footwear, the actors were keeping each other warm. After all, as Wu posted when she shared the photo, these women are busying running the world.

Hustlers is being written and directed by Lorene Scafaria, who wrote and directed Seeking a Friend for the End of the World and The Meddler, and is based on a New York Magazine article by Jessica Pressler titled, "The Hustlers at Scores." So when it comes to Hustlers, women are truly the bosses on and off screen.

Based on these few seconds of behind-the-scenes fun, it's easy to see the chemistry between these actors, which will probably only make people even less patient for Hustlers to actually hit theaters.

More like this
J.Lo Wants To Make A Sequel To This Movie With Ben Affleck
By Jake Viswanath
Keke Palmer Paid Tribute To "Other Half" Darius Daulton After Announcing Pregnancy
By Jake Viswanath
'The Holiday' Director Just Addressed *Those* Sequel Rumours
By Sam Ramsden
Keke Palmer Finally Showed Angela Bassett Her Famous Impression Of Her
By Stephanie Topacio Long
Get Even More From Bustle — Sign Up For The Newsletter