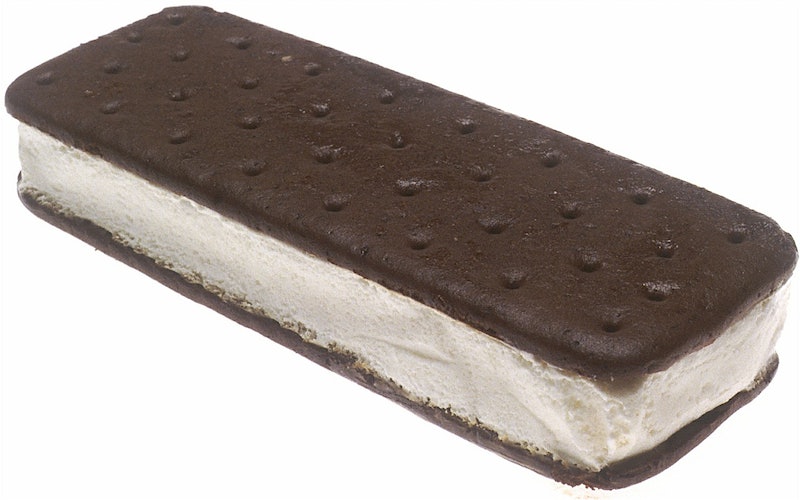 Nothing is better in the hot summertime than a delicious frozen treat — except when said frozen treat doesn't melt even after sitting outside for days, leaving one to wonder WTF it's made of, exactly. That's precisely what happened with this ice cream sandwich that won't melt, and it's scaring the internet. Bustle has reached out to the brand behind the sandwich for comment, and will update this article accordingly. In the meantime, here's what happened.

Mary Salter handed her grandson a Coles vanilla ice cream sandwich. The sandwich broke in two and the young child was most displeased; so he tossed the dessert snack outside. Salter assumed that it would melt away, and also that certain outdoor creatures might enjoy the sweet treat. But! Not a single living thing expressed any interest in the ice cream sammie — which sat completely intact (read: unmelted) after four days outside!

Salter did what any perplexed human being would do and posted on Coles' Facebook page to try to figure out what was going on with this mysterious ice cream imposter. The post racked up a decent number of likes, comments, and shares, with some people expressing shock and concern, while others seem less surprised.

Here's an image of the ice cream after it had been left outside for three days:

According to BuzzFeed, who spoke with Salter, Coles replied in a private Facebook message, saying, "Our ice cream sandwiches make use of very simple, commonly-used food techniques that help slow the melting process, and allows you to consume it without it falling apart in your hands. These techniques include adding thickener to the cream, creating a honeycomb-like structure which helps to slow the melting process. When the product starts to melt and liquid evaporates, you are left with what appears to be foam."

BuzzFeed took things one step further and recreated the scenario to see what would happen. Sure enough, the ice cream in the sandwich softened but retained its shape. Later on, a sticky, brown, thick liquid began to seep out of the bottom.

Salter, among others who commented on her Facebook post, are less than happy about whatever chemicals are in the ice cream sandwich that are stopping it from melting the way God meant for ice cream to melt. BuzzFeed shared a photo of the nutrition label for the ice cream sandwich, and in case you were wondering, the ingredients aren't just "ice cream" and "sandwich."

Reading the label, you see all sorts of unfamiliar words and numbers, like thickeners (412, 410, 407, 401) and emulsifier (322-soy). Nothing, though, transparently explains an ice cream sandwich that even the ants didn't want. Something's missing — what don't we know? I feel like I'm caught in a web of lies.

The Coles representative already mentioned thickeners, but what's an emulsifier? According to the Food Additives and Ingredients Association, "an emulsifier is a molecule in which one end likes to be in an oily environment and the other in a water environment." Emulsifiers are quite commonly found in ice cream, simply because it can't exist without them. Without emulsifiers, the milkfat and water would separate, the fat forming large, noticeable clumps. Emulsifiers help keep everything combined, as opposed to separating.

So, maybe there's a reason for some of the extra ingredients in Coles ice cream sandwich. Whatever's going on there, though, is reason enough for every rodent and insect in the neighborhood to say, "Meh, no thanks." Oh, well. More for humans, I guess?