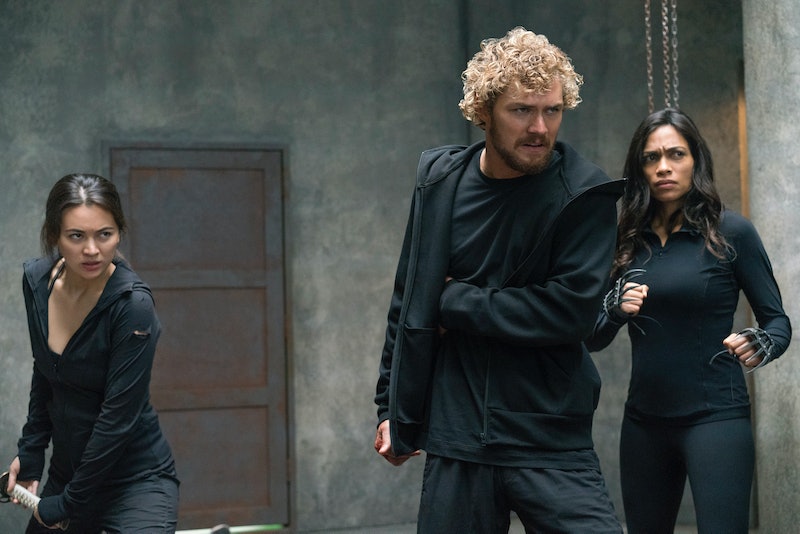 Critics — and anyone with access to Twitter — may not have been kind to the freshman season of Netflix's Iron Fist, but that's not stopping the Marvel series from returning for another round of combo ninja-fighting and boardroom-scheming. Hopefully this Iron Fist Season 1 recap will get you back in fighting shape before the premiere… without needing to actually go back and rewatch all 13 episodes that came before. (There's a lot of great stuff on TV these days, who has time for rewatching things??)

Danny Rand was the fourth Marvel hero introduced on the streaming service, following Daredevil, Jessica Jones, and Luke Cage. Played by Game Of Thrones star Finn Jones (RIP Loras), the series began when the young man returned to New York City to assume his rightful place at his family's company after having been missing and presumed dead for 15 years. After his parents were killed in a plane crash in the Himalayan mountains, Danny was found and taken by a group of warrior monks to the mythical city of K'un-Lun, where he eventually defeated a dragon in hand-to-hand combat (a fight not shown) to become the Immortal Iron Fist (a job he didn't want), who's charged with protecting K'un-Lun from their enemies, the Hand (a mission he failed at).

Here's where Danny and the rest of the characters left off at the end of Season 1. (Spoiler alert: everybody was kung fu fighting.)

Danny returned to the Big Apple to find that his dead father's partner had also passed way, from cancer, leaving his two children in charge of the company. Danny's first challenge wasn't corporate intrigue or deadly ninjas, but proving his own identity. After proving he was who he said he was, he established himself at the head of Rand Enterprises — and quickly discovered that the company was being used by Madame Gao to launder money for the Hand's heroin-smuggling scheme.

Apparently, Gao had caused the crash that killed Danny's parents by poisoning the pilots, after learning that Danny's father had found out and planned to confront her. But wait! Eventually, Danny learned that Gao didn't arrange his parents' deaths after all — it was actually his father's partner, Harold Meachum.

Speaking of Harold… the man turned out not to be dead after all. Having been resurrected by the Hand, the Meachum patriarch had lived in isolation ever since, observing his children from afar with only his poor assistant Kyle to keep him company. (Although his son Ward knew he was alive, Harold kept the truth hidden from his daughter Joy.)

Ward unfortunately got addicted to the Hand's heroin, and Harold decided to remove his increasingly unstable son from the company. In retaliation, Ward murdered his father… but Harold was resurrected by the Hand once again. Bad news: repeated resurrections drive a person psychotic, as poor assistant Kyle found out when Harold murdered him with an ice cream scoop. Harold then tried to frame Danny for the company's heroin-smuggling scheme, so Danny and Ward teamed up to take him down. Joy found out her father was alive just in time to watch her brother and her childhood crush gun him down. (They cremated him this time to ensure he wouldn't return yet again.)

In need of a place to stay upon his return, Danny found shelter in the dojo of martial arts instructor Colleen Wing, who quickly became a sidekick and a love interest in Danny's many adventures throughout New York and China. Of course, in an inexplicable twist, this random person whose random dojo Danny just happened to randomly wander into turned out to be a member of (you guessed it) the Hand!

Surprise, surprise — Colleen's seemingly benevolent mentor turned out to be just as devious as Madame Gao. While supposedly providing shelter for the city's orphans and outcasts, Bakuto was actually training an army for use in his own world domination schemes, even if his young soldiers didn't know it. Having conducted surveillance on Rand Enterprises for years, he swooped in and took Madame Gao's place controlling the company after she was captured by Danny.

Learning the truth of his motivations, Colleen teamed up with Danny to take Bakuto down. But when neither of them could kill him, Danny's ally Davos did the dirty deed… only Bakuto's body disappeared, to later be resurrected by the Hand so the character could reappear in The Defenders (during which he was finally killed for good).

Davos is an acquaintance of Danny's from K'un-Lun. A longtime member of that mystical community, Davos was put off when the title of Immortal Iron Fist was given to a white outsider after only a short training. (A pretty reasonable reaction, tbh.) He's still there to help Danny take down the Hand, however… until he realizes that Danny is more concerned with worldly concerns — crushing on Colleen, taking over his dad's company — than with executing his sacred duty of protecting K'un-Lun.

Eventually, Davos has soured on his old frenemy enough to declare his goal to murder Danny… and he even recruits Joy to his cause. (Given Danny had just had a hand in killing her long lost father, her anger at him is understandable.)

Oh, also the always-reliable Claire Temple was along for the ride for much of the season. She had time for absolutely none of Danny's sh*t, and she even got to kick some ninja butt. More of her in Season 2, please.

Iron Fist Season 1 ended with Danny bringing Colleen with him back to K'un-Lun — only to discover that the gates to the hidden city had been smashed, the valley littered with dead Hand assassins, and the city a heap of smoldering ruins. So much for that whole "protect K'un-Lun" thing…

What happened to K'un-Lun? Will Joy really try to kill Danny? Will Claire be the best part of the show again? Find out when Iron Fist Season 2 premieres on Netflix on Friday, Sept. 7.