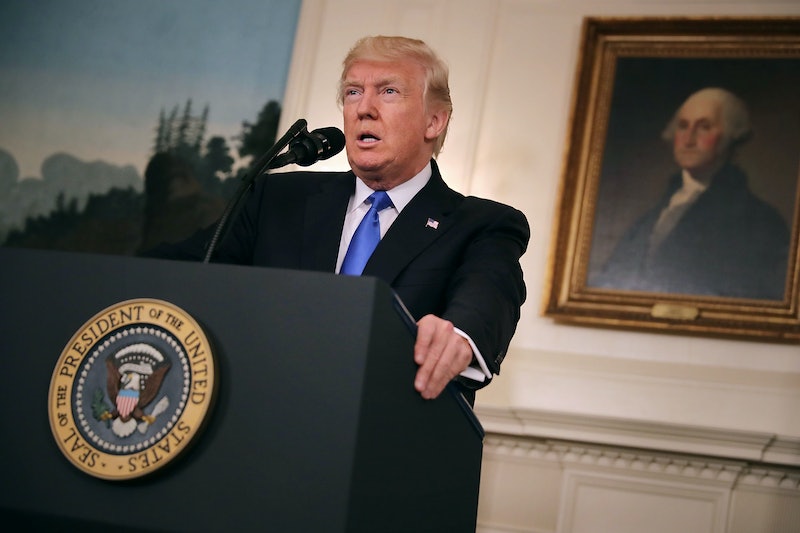 Before November 2016, few Americans knew what the "Emoluments Clause" of the Constitution was, but Donald Trump's election changed that as concerns about his personal business dealings influencing his presidential responsibilities became a reality. Now, the president is facing three lawsuits, alleging he violated the Emoluments Clause, the most recent of which was filed by around 200 members of Congress.

In their complaint, the Congressmen allege that by collecting payments from foreign governments at his hotels, President Trump is violating the Emoluments Clause. As stated in the Constitution, the clause forbids federal employees to "accept of any present, Emolument, Office, or Title, of any kind whatever, from any King, Prince, or foreign State" without getting permission of Congress.

Two days after Trump's inauguration, Citizens for Responsibility and Ethics in Washington (CREW) similarly sued Trump. Several of Trump's business competitors joined the CREW case in May. Attorneys general of Maryland and Washington, D.C. also filed a separate case against the president on June 12.

While there are three disparate lawsuits, the various groups suing see themselves as united, working for the same goal—getting Trump to divest from his businesses and eliminate conflicts of interest. CREW has even worked alongside the state attorneys general in filing their suit.

"We didn't file this lawsuit for our own benefit," says Jordan Libowitz, CREW's spokesman. "If it's not our lawsuit that goes forward but one of the ones that we've worked on or one that has followed ours with our Emoluments work, that's just as good. Our goal is that the president does not violate the Constitution. How we get to that point doesn't really matter."

Part of the reason there are multiple lawsuits tackling the same concern is because of standing—who has the legal right to sue the president. Courts require that lawsuits must be brought by someone who is directly damaged by the defendant. Since Trump businesses taking money from foreign governments doesn't directly implicate most people, finding standing is hard.

CREW's lawsuit claims standing due to its responsibilities as a government watchdog. Normally CREW focuses on keeping track of government corruption, but they allege that the blatant ethical problems from emoluments violations have made the organization unable to do their normal job. "Last year, you saw weekly if not daily things from us about ethics and campaign finance issues in Congress," says Libowitz. "Nothing would make us happier than the president selling his businesses, putting the money in a blind trust, and letting us get back to diving deep into FEC reports."

On the surface, Trump's competitors in the hospitality industry may have a more obvious justification to claim standing than CREW does. After all, they can argue that Trump's hotels have an unfair advantage by offering foreign clients access to government officials they simply cannot.

However, that argument alone may be too narrow.

"The difficulty there is that if those were brought alone, without one of the [other] three categories, then a successful plaintiff would still only really be able to get relief with respect to the emoluments that compete with his or her business establishment," Richard Painter, George W. Bush's chief White House ethics lawyer who has worked on the CREW lawsuit, tells Bustle. In short, if the case only affects hotels that compete with Trump's, the larger Constitutional question is left out.

The state AG case relies on the powers of states within the federal system to ensure federal law is being applied fairly — and that may give them the strongest standing, according to experts. "If then federal government officials are not carrying out their obligation pursuant to the Constitution, I would think that states should have considerable standing to bring those types of claims," Painter says.

"The one ace that states have up their sleeves that is not available in the other cases is the special standing for states that the court recognized in Massachusetts v. EPA," says Cornell Law Professor Michael Dorf, referring to a ruling that states could sue the federal government to enforce regulations. In fact, Dorf refers to that case as "a thumb on the scale when it comes to standing," and says he would "bet on the states."

All of these lawsuits are still in the early stages, and it's unclear which courts will take up, let alone how they'll rule. What is clear is that there is a mess of litigation ahead, and with this multi-pronged approach, there's a real possibility one of the cases could really damage the president.