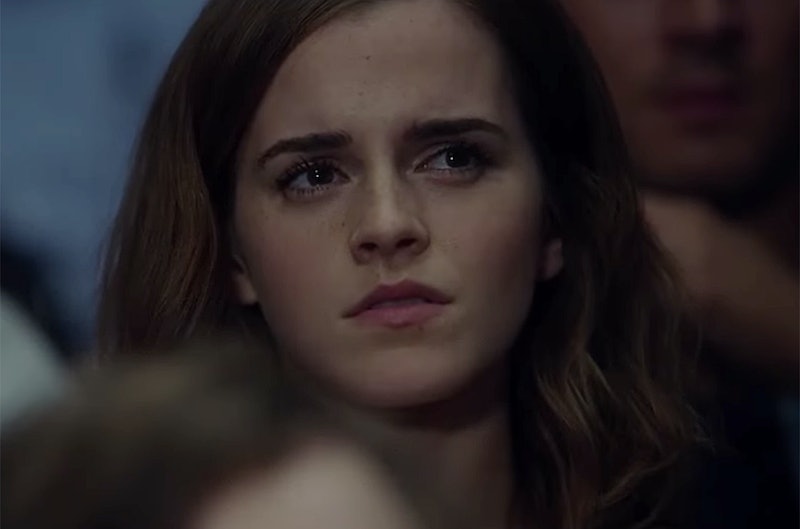 Technology is a powerful and sometimes scary force. For example, a MacBook's camera can be used to spy on its owner, and life-like AIs could be used to replace real life romantic partners in the future. But according to the director of tech thriller The Circle, James Pondsolt, there is one thing about contemporary tech that is the scariest of all: The fact that so much modern technology captures our personal information forever.

"We have great search engines, ways to connect with high school friends... and in all of these transactions there is personal information we give away for free, and anything can be done with it. It's metadata that's collected in some faceless cloud, or potentially it could be monetized. That's the part that's upsetting," the director tells me over the phone.

The Circle, out April 28, and based on the novel by Dave Eggers, addresses this issue head on. The story surrounds Mae (Emma Watson), a young woman who lands the job of a lifetime at a tech company (think Google meets Facebook, times 10) called The Circle. The titular service stores all of its users' personal information in one place, advertising this as a convenience to its users. But as May spends more time with The Circle's employees, and its seemingly genial CEO (Tom Hanks), she uncovers the true, unethical agenda of the company's founders.

It's a world that seems like a not-too-distant reality, and according to Ponsoldt, who has two young children, this is a terrifying prospect. "After I finished reading the book there was a sense of terror, for my son who was about to be born — now we have two children — thinking about the world that they were going to inherit very soon," he says.

Kids growing up today are surrounded by more screens than ever before. Therefore, their personal information is being collected at a progressively earlier age. "I was able to live a childhood where I screwed up a lot. I made lots of mistakes but essentially the repercussions were negligible. I didn't have a digital footprint of all of my mistakes. I would get sent to my room and have to wrestle with my conscious. I had to figure out myself how to hopefully become an ethical adult," he says. "My kids won't grow up in that same way. In the next 10, 15, 20 years, I imagine you won't be able to be in public and not have a total documentation of your life that will potentially haunt you into college and the job market."

He has a point. Personal information is collected in a multitude of ways, constantly. And while much of it seems harmless — a small price to pay for convenience or pleasure — The Circle begs the question: What if all of our information was used against us? All of this data in the wrong hands could potentially be fatal, and Ponsoldt agrees.

"The real fear is, say, what if we had an unethical leader — if we could only imagine such a thing — and unethical advisers, if they had access to that information, how they could weaponize it against us. I don’t think it’s such a huge leap. It’s plausible," he says. "Things are growing and changing at such an exponential pace, that the philosophical, moral, legal questions we need to have we probably should have been asking a while ago."

Though the director is clearly skeptical of modern technology and the power it possesses, he wants to be clear: "I am totally addicted to my screens," he says with a laugh. "Most people are begrudgingly acquiesce to [giving up information], or we don’t really care. And I include myself in this conversation. There's an assumption that if one makes a film that engages with technology they are a technophobe. I certainly am not. I love technology."

But like all great love stories, this one is ever more complicated, with no easy solutions in sight. All the father of two can do at present is attempt to create a healthy environment for his kids to grow amid the questionable advancements. Though admittedly that's easier said than done.

As Ponsoldt (and the world) faces an uncertain future, books and films like The Circle may act as a warning to consumers of technology. Though people may not quit using Facebook to talk to friends, or cease using Google to regulate their news feeds, perhaps they may feel slightly more cautious and informed when engaging with new technologies moving forward.