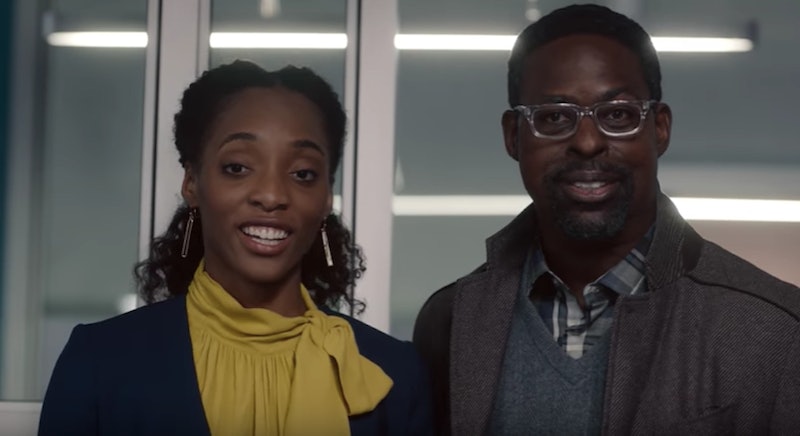 Fans can always count on This Is Us to leave us wanting more, which was more than proven during the Season 2 finale, after a worrisome flash-forward between Old Randall and Adult Tess brought up a new mystery. An older Randall (Sterling K Brown) told an apprehensive-looking grown up Tess it was time to go see "her," but he neglected to say who this person was. Naturally, this inspired a ton of fan theories, but fans can rest assured that This Is Us Season 3 will reveal who "her" is — and it's going to do it sooner than you think.

"The 'her' is a woman. I can tell you that much," Brown shared in a recent interview with Entertainment Weekly. "It is someone that we have met over the first two seasons, so it won’t be something that comes out of nowhere." And in regards to when the identity of "her" will be discovered, the actor seemed pretty certain that the story will come to fruition by the halfway point of the season: "I think by about midseason, maybe episode 9 or so, the audience will know who that individual is." And if you're wondering whether or not the reveal will disappoint after all of the hype, Brown assured fans, that won't be the case, calling the outcome "exquisite."

Many fans are worried that the "her" in question is Randall's wife, Beth, who was suspiciously MIA in the flash-forward scene between Randall and Tess. Given the concerned way Randall and Tess both talk about this person and how they don't really seem to want to go see "her," fans have assumed that this individual isn't doing very well and is perhaps even sick. The thought of that happening to Beth is heartbreaking, and while Brown could neither confirm or deny Beth's involvement in this future storyline, he did say that he loved how concerned fans are for his on-screen wife. "I can’t answer the question, but I like that they love her that much," he said in the same interview.

But apart from this worrisome aspect of his life, Brown believes that, for the most part, Randall has had a pretty good life leading up to these flash-forward moments, telling EW:

"I think Randall has experienced a great deal of success, so by and large he is at a place in life where he’s fulfilled. But there’s something on his mind — obviously with this individual — that weighs heavy on his soul. But I think life is good. We will also find out something about Tess this season, which is pretty cool. When you see Randall going to visit her, it’s nice.… Randall is in a good place. That’s all I can say."

However, Randall and Tess aren't the only ones with a compelling secret in Season 3. The mystery behind Jack's death may be in our rearview mirror, but there's something else the Pearson patriarch has been hiding from his family, which will be brought to light in the coming months. "There’s something about Jack that he’s kept private. It has to do with the war, and his experience over there," said Brown. "There’s something that happened in Vietnam that’s a bit of a game-changer for the present-day Pearsons that will be revealed throughout the course of the season."

Let's just hope that whatever it is doesn't tarnish the way they remember Jack and the wonderful man he grew up to be.