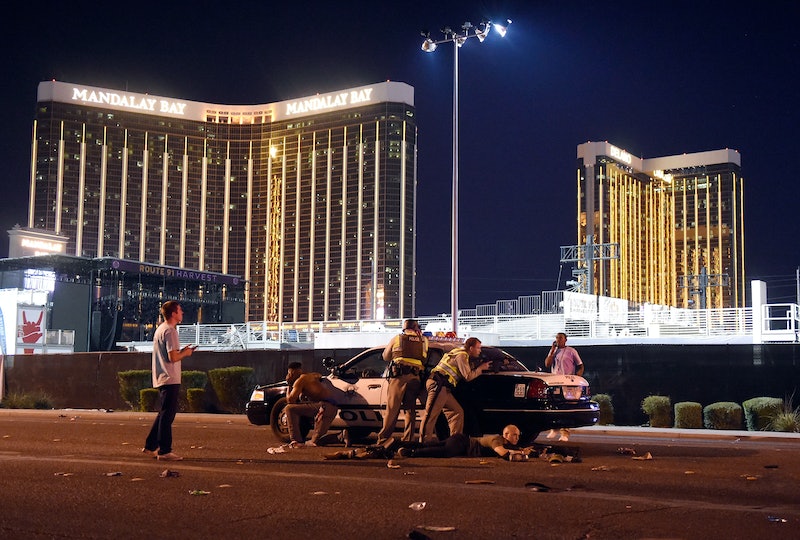 This past Monday, Chris Michel, the owner of Utah’s Dixie GunWorx, received a message from a stranger. Actually, he received messages from several strangers — hundreds of emails, Facebook messages, and voicemails from names he didn’t recognize. Once news broke that he’d sold Las Vegas shooter Stephen Paddock a firearm, Michel tells Bustle that “plenty of haters” contacted him to blame him for the mass killing. But one man’s message stood out. A South Carolina gun shop owner reached out to Michel to tell him he knew what he was going through — that he, too, had once sold a firearm to someone who then committed a crime.

“Because we’re in firearms, we’re manly men — tough muscle types,” Michel tells Bustle. “But, you know, it’s a shoulder to lean on. It’s someone else to say, ‘It’s not your fault.’”

David Famiglietti, whose Las Vegas gun shop New Frontier Armory sold Paddock a rifle and a shotgun, also found a shoulder to lean on. He’d received a Facebook message from a store owner who had sold the Orlando shooter one of the guns he had used to kill 49 people at the Pulse nightclub in June 2016, he says.

"[The firearm community has] to have each other’s backs all the time, not just in times like this," Famiglietti says. "We’re one of the very few industries and pastimes that has to constantly be on the defensive and fight for our rights, and the rights of all citizens, nonstop to be able to enjoy one of our freedoms."

What Michel and Famiglietti are describing is the rise of a niche group within the broader firearms community: gun shop owners who have sold firearms to mass murderers and are having trouble dealing with both the intense backlash and grappling with their own feelings of culpability. Time and time again, these gun shop owners will turn to each other for consolation, reminding each other that they don’t sell weapons — only “tools.”

Michel tells Bustle he’s still considering whether there was anything he could have done to prevent the Las Vegas killing spree. The shooter had visited Dixie GunWorx three times, telling Michel he’d just moved to the area and was “frequenting” local gun shops. During his third visit, Michel sold him a shotgun.

According to existing gun laws, Michel did everything by the book. He says Paddock passed all of the background checks required by the state of Utah and the federal government. In Utah, residents can buy firearms without a permit or license. Once they’ve successfully made their purchase, they aren’t required to register their firearms, either. In addition to checking off all of these boxes, Michel insists the shooter had also passed his gut check — he says the 64-year-old hadn't raised any "red flags."

"I would love to have been able to [have known] this sick bastard had whatever he had inside him that would let him do such a horrific thing in my town."

So, does Michel think existing gun laws are lacking? Not quite. Michel tells Bustle he doesn’t think any “stronger laws would change where we’re at today.” However, he believes “enforcement” is a loophole that needs to close, especially when it comes to people who commit other crimes, like domestic violence.

"I think there is plenty of gun crime that happens where there should be more enforcement and no leniency to people who use guns in that instance," Michel says, saying that the right to bear arms should only extend to those who have not used weapons or violence against other people previously. "That right should be stripped from someone for the rest of their life. They’ve proven they can’t use that right effectively."

By way of example, Michel tells Bustle about a customer who has come into his store multiple times, and who Michel says he knows has wielded a gun as a weapon against his wife in an instance of domestic violence. Michel says he refuses to sell any firearms to this customer based on his own "moral code."

There’s a legal code, too: In June 2016, the Supreme Court ruled on Voisine v. the United States, prohibiting anyone convicted of domestic violence from possessing firearms. Other people who may lose their rights to the Second Amendment are those convicted of a felony and those who are mentally ill.

The Las Vegas shooter didn't have a criminal record, which allowed him to pass background checks with ease. Nevada gun laws permitted him to purchase some 33 firearms in just 12 months. Federal law also allowed Paddock to make rifle purchases without reporting them to the Bureau of Alcohol, Tobacco, Firearms and Explosives, as citizens are required to with handguns.

"Did I mess up, screw up, do something wrong?"

Famiglietti tells Bustle that more must be done to prevent people like the Las Vegas shooter from getting their hands on firearms, but it's not up to the firearm industry to figure out what. Alluding to questions surrounding the shooter's mental health, Famiglietti suggested those answers might lie within the medical community instead.

"We need to figure out how we can spot sick people like this before these tragedies happen,” Famiglietti says.

"We’re not doctors or psychologists," he says. "I would love to have been able to [have known] this sick bastard had whatever he had inside him that would let him do such a horrific thing in my town. I would give anything to have that superpower."

The idea of needing a “superpower” to stop mass shootings is precisely what Famiglietti’s critics take issue with. A March 2016 study found the United States’ gun homicide rate to be more than 25 times higher than that of other high-income countries. Many of those countries have long since taken steps to tighten gun laws, and have seen the results. In Australia, legislators took action on gun control just two weeks after a deadly 1996 shooting, which claimed 35 lives. Australia hasn’t seen a single mass shooting since.

Gun control advocates in the United States might also eye Japan, whose strict gun regulations meant only 271,000 of the country’s 127 million citizens owned guns as of 2011. In 2014, the country saw just six reported gun deaths.

Famiglietti and Michel's critics might say that the right to go to a concert and not fear death — not even consider the prospect of being gunned down in cold blood, as many of us now do — is a freedom Americans can no longer enjoy. Past shootings in malls, movie theaters, churches, and nightclubs have made occupying public space of any kind a potential death sentence.

And so, while Americans are left living in fear, gun shop owners are struggling with the idea that even though they follow all the rules, it's not enough.

"Did I mess up, screw up, do something wrong?" Michel tells Bustle. "That's the question that's kept me up all night."