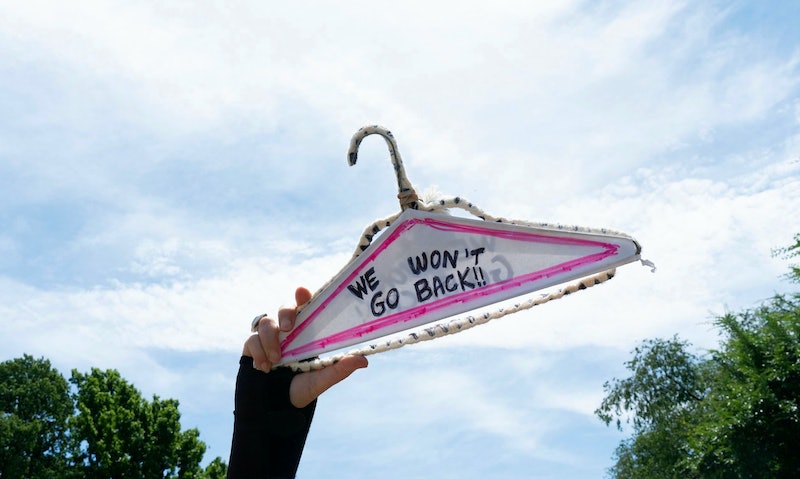 Bustle’s “What’s Missing” is a column that gives space to important insights being left out of the conversation around the most talked-about news of the day. In this op-ed, award-winning reproductive justice activist and writer Renee Bracey Sherman explores what's missing from the conversation about abortion bans in the United States.

As states across the nation are pushing to outlaw abortion, many are worried that these bans are paving the road that will send us back to the days our elders warned us about, before Roe v. Wade. In our collective memories, we remember the pre-Roe days as a horrific period where people who sought illegal abortions — women like Gerri Santorro — died from hemorrhage and uterine perforation. Or people died because they performed their own unsafe abortions with objects like knitting needles, parsley, and coat hangers. Politicians and activists who support abortion access are sounding the alarm, declaring “we cannot go back because women will die” if they have to self-manage their abortions.

But saying “women will die” if Roe v. Wade falls isn’t as helpful as many think it is. It actually can reinforce the idea that abortion is an unsafe procedure (it’s not) and that self-managed abortion is automatically dangerous. To put it frankly, it’s stigmatizing. But it’s also complicated. It’s true that some women will die because they will be unable to get the abortions they want, and with our nation going through a maternal mortality crisis — particularly for Black women — we cannot afford to lose any more lives.

That context doesn’t always come through on a protest sign or in a chant, though. If Roe v. Wade is overturned, it will be a tragic day, and it’s scary to think that some people will use unsafe methods to terminate their pregnancies. I would have done anything to myself if I wasn’t able to reach an abortion clinic when I needed one. But the reality is that self-managed abortion would look very different now should Roe v. Wade be overturned.

Today, coat hangers are not what self-managed abortion looks like. With the invention of medication abortion in 1988, abortion was revolutionized access around the world. Medication abortion is extremely safe, and patients can safely manage their own abortions at home with minimal medical oversight. If I had known there were safe methods like medication abortion, I could have easily terminated my pregnancy at home.

Medication abortion isn’t as available as we’d like, particularly in this critical moment, because of the stigma around it. Politicians have placed medically unnecessary restrictions on abortion pills and telemedicine abortion in 17 states. The Food and Drug Administration also refuses to remove regulations on medication abortion, which require it to be dispensed only “in clinics, medical offices, and hospitals by or under the supervision of a certified healthcare provider,” who must meet “certain qualifications.”

What we need is to change the conversation from “women will die” to “abortion is safe, and we can do it ourselves.”

A recent study published in the peer-reviewed journal Contraception from researchers at the University of California, San Francisco found that nearly half of American women wanted the ability to get medication abortion either over the counter, online, or from their health care provider as a “‘just in case’” method, like we can get Plan B. Canada and Australia have started to make medication abortion available at pharmacies with a prescription, as well as through the mail directly to patients. What is possible if we are able to just get the medication and take it at home with the people we’re closest to by our side?

Of course, self-managed abortion won’t be the answer for everyone. People will still want and need surgical abortions, as I did. We must do everything we can to ensure independent abortion providers are able to not only survive, but thrive in their communities. These providers are too often the only place to access abortion in their states. It’s going to take a number of strategies to get us through this time, and making self-managed medication abortion easily accessible is one of them.

With Roe v. Wade nominally in place, the reality is that some people take various measures to perform their own abortions because abortion is unaffordable. Even now, people who self-manage their abortions are being jailed — particularly women of color and immigrant communities who are already targeted by law enforcement and criminalized by the state.

This is why we need to use a reproductive justice framework when advocating for abortion access, so that we don’t leave the most marginalized among us without access. People should be able to obtain an abortion without fear of being stopped by Immigration and Customs Enforcement or police on our way out the door, without having to drive hundreds of miles for care, and without being misgendered during the procedure.

What we need is to change the conversation from “women will die” to “abortion is safe, and we can do it ourselves.”

In this moment of crisis, we should continue to push for a future where we have true control over our own abortions. We don’t have to be afraid of self-managed abortion. As you’re in the streets rallying for abortion access, it’s crucial that you’re not only fighting to protect Roe v. Wade, but remembering that we can do this ourselves, safely. The pre-Roe horror is a history we must never forget, but we cannot allow it to scare us out of pursuing a visionary future where everyone has access to abortion care as soon as they need it, on our own terms.