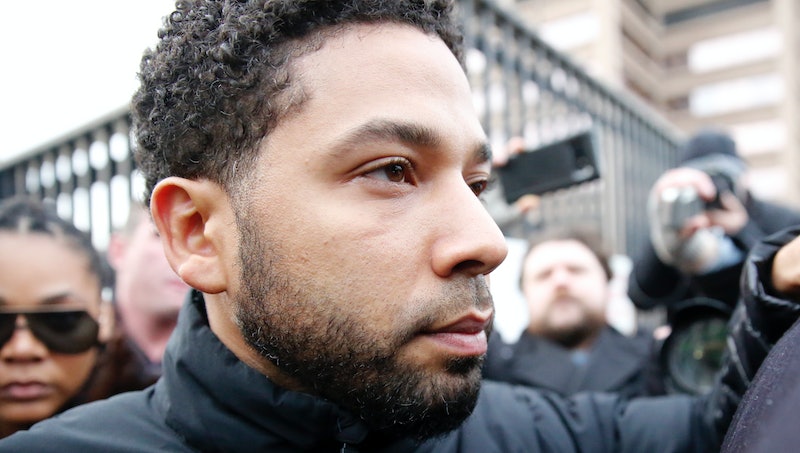 Bustle’s “What’s Missing” gives space to important insights that are being left out of the conversation around the most talked about news of the day. In this op-ed, writer and community organizer Clarissa Brooks unpacks what’s missing from the discussion about Jussie Smollett and racial violence.

Empire actor Jussie Smollett told Chicago police in late January that he had been the victim of an attack that had all the makings of a hate crime. On Thursday, he turned himself in to police after he was charged with a felony count of disorderly conduct for allegedly filing a false police report. Since then, a common discussion point among many of us following the case has been: Do you think Jussie Smollett lied?

While that's a valid question, there are also other valid questions that are equally deserving of an answer: Do we trust the Chicago Police Department? Why is it so easy to believe that Smollett would make this story up? And why don’t we have more empathy for black survivors of violence, especially those who are LGBTQIA+?

As Charles Preston, a community organizer and journalist in Chicago who has covered race and the Chicago Police Department, sums it up to me: “Many of our people — black people — are calling for the most corrupt and racist police force in the country to jail another black gay man … for a falsified police report. That is what is happening.”

The only people who know if Smollett’s attack happened or not are Smollett and the people involved in the incident. We as the public are not able to decide and decipher what occurred. But whatever the outcome may be or how much we trust it, there are things that are being left out of the conversation that deserve to be talked about.

Firstly, people aren't talking enough about the past failings of a police department that has been known to systematically oppress and abuse black folks. There were the cases of Laquan McDonald and Rekia Boyd, who were both shot and killed by Chicago Police officers. In a study of the city's police department use of force incidents between 2011 and 2016, the Department of Justice found "a pattern of civil rights violations" by the Chicago Police Department. The report also noted that officers' use of unreasonable force fell "heaviest on predominantly black and Latino neighborhoods."

In a press conference about Smollett's charge, the police chief said Smollett "took advantage of the pain and anger of racism to promote his career." While the investigation is ongoing and the facts are still being uncovered, the response and immediate acceptance by many in the American public since his remarks has shown how easily they can be swayed to trust institutions that regularly kill and harm black communities.

Secondly, the conversation has completely left out the effects of not believing black people who have, in fact, been victims of violence. It is well-documented that black women, specifically, are rarely believed when they are sexually assaulted. In a 2015 case, Oklahoma prosecutors claimed police officer Daniel Holtzclaw, who was convicted of raping multiple black women, specifically chose to victimize these women because they’d be less believable if they reported the assaults.

Oppressive systems show up in how we navigate the world, how we are believed, and who gets to decide if we deserve justice.

That burden of not being believed also shows up when black men report assaults. After reports came out that Terry Crews said he had been sexually assaulted, Crews was mocked because people didn't believe he was a victim. In testimony regarding the Senate's Sexual Assault Survivors’ Bill of Rights, Crews said he was told his assault was just a "joke" or "horseplay." His sexuality also became a topic of discussion. As Jay Connor wrote for HuffPost, “when we question a victim’s sexual preferences after an attack, not only are we criminalizing homosexuality, but we’re devaluing the severity of the actual crime.”

And finally, the public seems to be forgetting the legacy of hateful violence that black queer folks do face on a regular basis. Hate crimes are hard to report, prosecute, and gather proper information on. The FBI reported in 2017 that racially motivated hate crimes rose 16 percent nationally, with Chicago reporting the highest hate crime rate of any other city in Illinois. The National Coalition of Anti-Violence Programs also reported in 2017 that of the 5 percent rise in crimes against LGBTQIA+ folks that occurred that year, 60 percent of them were against black people.

Context is important to understanding why Smollett’s case has garnered so much public interest. Racism, homophobia, and respectability politics rule our every day, and these -isms are always interested in black and brown folks. We don’t get a day off. Oppressive systems show up in how we navigate the world, how we are believed, and who gets to decide if we deserve justice.

Pundits who are looking to continue erasing and silencing victims of hate crimes and sexual violence will keep doing just that regardless of the results of the Smollett investigation. This case will be their fuel, but it also means those of us interested in seeing justice served will have to fight harder for survivors.

There is no shame in standing up for survivors. This case does not change the reality that systemic racism, homophobia, and patriarchy are directly and indirectly killing marginalized folks across the country. We can hold multiple truths to be possible at once. We have to show up for each other because history has shown us that no one else will.