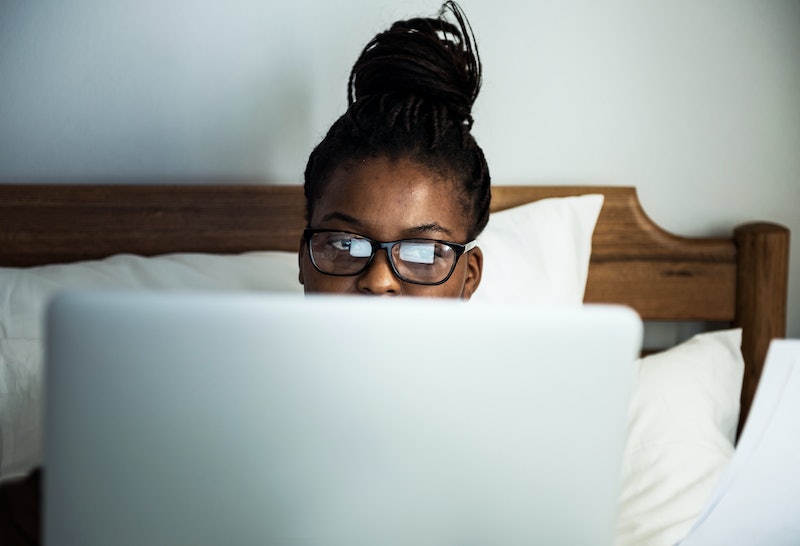 New research from the University of Sussex has found that the wellbeing of some workers can be negatively impacted by not being able to send and receive emails out-of-hours. In other words, some find the idea of 24/7 email access less stressful than leaving their work where it arguably should be: in the office. So why can't we stop working during evenings and weekends? Is it because our jobs really hold so much personal value, or has working culture just become well and truly toxic?

The study, which was conducted by researchers at the Universities or Surrey and Sussex and published in the Computers in Human Behaviour journal, focused on the trend of companies banning access to emails outside typical working hours.

Car manufacturer Volkswagen hit headlines in 2012, per the BBC, for only allowing allowing emails to be sent to employees' phones half an hour before the morning start and 30 minutes after the end of the working day. Weekend emails were banned entirely. Entire countries have adopted a similar practice. In 2017, a French law passed dictating that companies with more than 50 workers must state when employees should and shouldn't send emails.

The study by the Universities of Surrey and Sussex surveyed hundreds of workers and revealed that out-of-hours email bans have a positive and negative effect, depending on personality type. For example, the strategy may help some people achieve their goals while others feel they need time outside of work to progress in their career.

As journalist Ellen Scott wrote in Metro, "If a job simply cannot be done within a nine-hour working day, that’s not an issue with workers, but with the job itself." But, according to a 2017 survey by office company Regus, almost a third of UK workers admitted to working in their spare time.

We have grown accustomed to prioritising work over literally everything else: friends, family, our own health. You name it; it probably plays second fiddle to work. For some, work is life — more than just a means of putting food on the table. While this may not make for the healthiest lifestyle, it is a matter of choice. The problem comes when everyone feels compelled to think and act in this way.

I should know. I regularly spend evenings and weekends catching up on emails, finishing articles, and trying to get my "passion projects" off the ground. The strange thing is that, as a freelancer, I don't have a boss. I face no day-to-day expectations other than the ones I place on myself. (These internal memos can be stricter than any managerial requirement, as many self-employed people will attest.) Surely this is a sign that career culture, rather than individual company policies, needs a shake-up.

Freelancers only earn money when they work; they only receive prestige when something they do is noticed, and I mean really noticed. This translates into a constant desire to stay ahead. A need to take on more work and to persist in conjuring up new projects, new angles, new revenue streams.

Those in "regular" employment are battling for favour, if not for promotion then to avoid redundancy, or the risk of being fired. They're spending precious weekend time planning emails and perfecting presentations, desperately trying to show their worth.

This is the new normal, but it's not necessarily right. Earlier this year, a UCL study of 20,000 employees found that women who worked more than 55 hours a week had 7.3% more depressive symptoms than women working between 35 and 40 hours a week. Working weekends was also associated with a higher risk of depression for both sexes.

A research paper presented at the Academy of Management's 2016 meeting highlighted another problematic aspect: the expectation of being available in your own time. This alone was said to cause a greater impact than the act of physically answering emails. Emotional exhaustion ensues along with poorer job performance and less of a work-family balance.

What I'm slowly starting to realise is you will never do your best work if you don't allow yourself room to breathe. So don't chastise yourself when you fail to achieve a personal goal in the time you'd hoped. Don't be ashamed to admit that you're going to miss a deadline or need some extra (working hours) time to tweak a few things.

If something is worth waiting for, people will wait. If not? Deal with the letdown and move on. And, for the love of self-care, hold off on those emails until Monday morning.

More like this
Twitter Has *A Lot* To Say About The "Single Penalty”
By Sam Ramsden
Pret & Costa’s Coffee Is The Strongest On The High Street, According To Which?
By Sam Ramsden
Here’s What TikTok's "Mascara” Trend Is *Really* About
By El Hunt
Maya Jama’s Net Worth Definitely Won’t Give You The Ick
By Sophie McEvoy
Get The Very Best Of Bustle/UK
Sign up for Bustle UK's twice-weekly newsletter, featuring the latest must-watch TV, moving personal stories, and expert advice on the hottest viral buys.