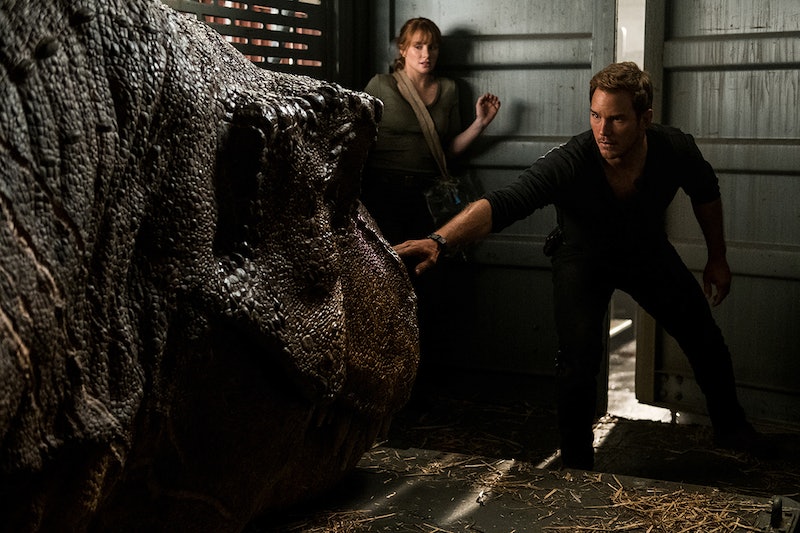 A frequent complaint about modern blockbuster movies is that there is an overreliance on CGI special effects. Many people long for the practical effects of '80s and '90s blockbusters that gave viewers — and actors — something tangible on screen rather than a distant computer effect that was added in post-production. And one of the gold standards these fans often point to for practical effects supremacy is the original Jurassic Park, with some even claiming that the 1993 film's effects hold up better than those seen in 2015's Jurassic World. Well, the makers of this summer's Jurassic World: Fallen Kingdom apparently heard those fans, and an exclusive new behind the scenes Jurassic World Fallen Kingdom clip shows the amazing practical effects that went into one of the film's most memorable scenes.

The scene in question is the one where Owen and Claire end up in a cage with a tranquilized T-Rex. The massive dino wakes up with Claire on top of it, giving her the ride of her life and nearly eating Owen. It's an amazing and thrilling scene, featuring what looks like a real life thrashing, drooling, breathing, and roaring animal, and if you were wondering how they did it, prepare to find out. The behind the scenes clip shows that the T-Rex in the scene was a mammoth, animatronic puppet that the actors actually got to interact with. How cool is that?

The animatronic weighed several tons, and it took a total of eight puppeteers working in tandem to operate it. As revealed in the clip by Neal Scanlan, the film's creature effects creative supervisor, one person in the back of the puppet lifts the body, two underneath it operate the neck, two more move the head via radio control, another takes care of the eyes, one deals with the creature's breathing and nostrils, and one more handles the monster's jaw.

The T-Rex is also fitted with a soft section on its neck that acts like a saddle, along with hidden handles on its sides. This was to aid actor Bryce Dallas Howard and keep her from getting injured when she had to climb on top of the puppet and hold on for dear life. The creature's lifelike on-screen appearance was aided by a white/clear slime mixture that was created as its drool, and Scanlan reveals that the floor became quite slippery and dangerous as shooting went on due to the sheer amounts of drool that were applied to the T-Rex's mouth.

It's clear from the clip just how much work went into this one scene, and it will surely give you a new appreciation for Fallen Kingdom, available on Digital Sept. 4 and Blu-ray Sept. 18. Thanks to the movie, it would seem that practical effects fans no longer have reason to complain about modern movies' computer-heavy effects. Fallen Kingdom utilizes some absolutely astounding practical effects that would do the original Jurassic Park proud, and make this movie a worthy addition to any '80s and '90s blockbuster fan's collection.

More like this
Revisit 1992’s 'A League Of Their Own Cast' Photos After The New TV Series
By Grace Wehniainen
At 28, Lesley Manville Was Acting, Picketing, & Singing Kate Bush Songs
By Olivia-Anne Cleary
Taylor Swift Wanted To Be In 'Twilight: New Moon,' According To Its Director
By Grace Wehniainen
Jonah Hill Explains How His Anxiety Attacks Will Change The Rest Of His Career
By Grace Wehniainen
Get Even More From Bustle — Sign Up For The Newsletter