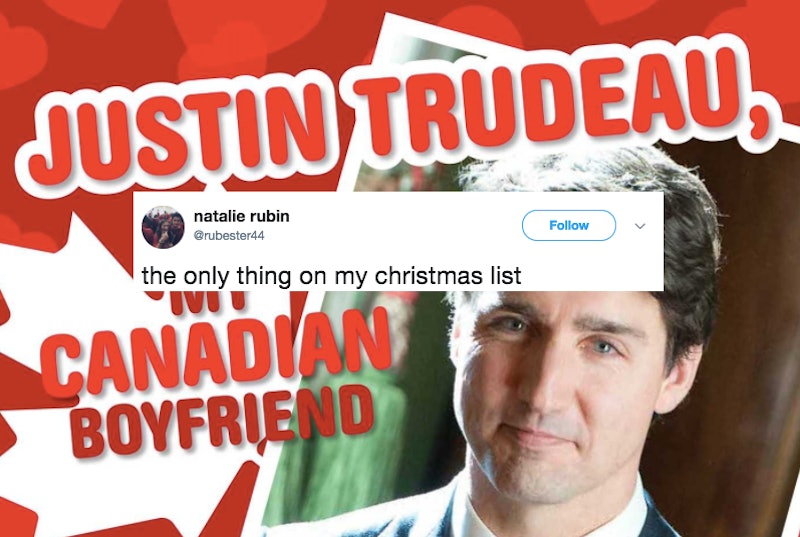 So, uh, hey. It’s been a tough year. Do you need something kind of ridiculous to remind you that as bad as everything might seem, there is still some hilarity in the world? Here — have this "Justin Trudeau, My Canadian Boyfriend” calendar. It’s all ready to get 2018 started on a less horrifying note than the one on which 2017 is going out, and, well… it’s probably exactly what many of us need right now.

The idea of My Canadian Boyfriend, Justin Trudeau appears to come to us courtesy of Universe Calendars and publishing house Rizzoli New York. A Facebook page bearing the calendar's name originally launched during the summer of 2017; what's more, in a post dated June 21, it noted that the 2018 calendar would be arriving in short order. A book titled My Canadian Boyfriend Justin Trudeau was also said to be forthcoming at the time.

Now, the calendar is making the rounds on Twitter as user after user has tweeted photos of it encountered in the wild, with enough entries coming in for the story to warrant its own Twitter moment. But guess what? Although it will almost certainly be lurking in the calendar section of every major bookstore between now and the post-holiday clearance sales, the calendar may also be procured online! Amazon has it for the low, low price of $12.98, if that’s your jam.

The product copy, by the way, does not disappoint. “I have a new boyfriend,” it begins. “No, you've never met him. He lives in Canada." A nod to Avenue Q? Perhaps, but even if not, still quite the way to sell oneself. It continues, “The Justin Trudeau, My Canadian Boyfriend 2018 Wall Calendar is a year-long celebration of dynamic, smart, compassionate, and sometimes sassy Canadian Prime Minister Justin Trudeau.” It goes on to describe itself as featuring “12 images ‘Yucon’ enjoy of model-like role-model Canadian Prime Minister Justin Trudeau,” along with “sweetly off-kilter but well-meaning commentary about his views from his sparkling blue eyes on everything from love, family, and of course global affairs and economic growth.”

To be fair, Trudeau isn't perfect; his track record on some things, like Canada's historic and continued mistreatment of its indigenous peoples, is not great. However, when compared with, uh, a certain other world leader currently residing in a house known for its sparkling white color... well, it's not hard to see why the "Justin Trudeau, my Canadian boyfriend" joke has flourished. His generally feminist stance on many issues stands in stark contrast to the increasingly horrifying activities coming out of the White House.

As you might expect, Twitter is having a variety of responses to the calendar’s existence, most of which largely depend on how the respondents feel about Trudeau in general. Many of them, though, do appear to get the joke. Here's what folks are saying about it: