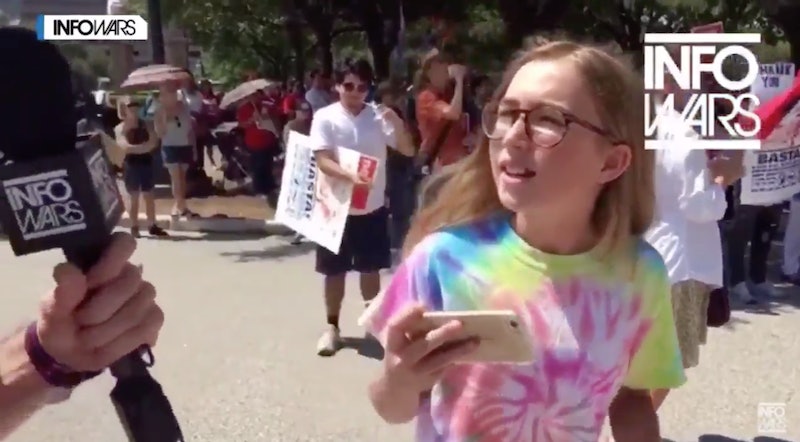 As a general rule, kids are told not to talk to strangers. But what about strangers wielding microphones in the name of conspiracy theorists masquerading as “journalists”? At least one young person knows what to do in that situation. Behold, a kid calling an InfoWars host a “f*cking idiot”.

If you’re unfamiliar with InfoWars, maybe stop reading here. The fact that you’ve been able to be on the internet this long and avoid any information regarding the conspiracy-riddled “news” site — those quotation marks are doing a lot of heavy lifting there — is a blessing. Be free. Live the life we all wish we could.

InfoWars is an uber-conservative site run by Alex Jones. John Oliver did a thorough story on Jones and InfoWars on Last Week Tonight, which is well worth 22 minutes of your time. In Oliver's segment, he states that in addition to peddling conspiracy theories, Jones spends a significant portion of his four-hour long radio show peddling various pseudo-“health” products. (Those quotation marks are again doing a lot of heavy lifting.) The “information” Jones and InfoWars perpetuates is questionable at best and insidious at worst.

Now, is cursing someone out the best way to engage with a person whose primary job is to say inflammatory things in hopes of getting a rise out of someone for #good #content? Probably not. Is it super satisfying to watch? You tell me.

The clip is from a longer video in which InfoWars correspondent Owen Shroyer “invades” Trump protests under the guise of trying to engage in an open dialogue. In the above video, it sounds like he asks the kid, “How are you, young man?” (Shroyer stated on Twitter that he was in fact saying “young ma’am.” But as one Twitter user pointed out, that’s not even a phrase any human has ever used before.) To which the kid responded, “You’re a f*cking idiot.”

Jones and InfoWars are known for promoting such classic conspiracy theories as “pizzagate” (which allegedly led a 28-year-old man to fire an AR-15 rifle into a Washington D.C. pizzeria), the untrue statement that three million illegal aliens voted in the 2016 Presidential election, that actual outer space aliens landed in Florida, claiming there are child slaves on Mars, and that there are chemicals in the water that “turn the friggin’ frogs gay.” Oh and also, he’s a Sandy Hook truther.

Jones has referred to himself as “performance artist”, citing during his recent custody battle that he is merely “playing a character.” And it is that character, not Jones, who has done things like call Obama a co-creator of ISIS. During her pre-trial testimony, Jones’ ex-wife said Jones was “not a stable person."

This would all be much easier to write off as fringe and absurd if the current President of the United States weren’t getting his news from InfoWars and Alex Jones. Trump has repeatedly perpetuated false information from Jones on Twitter as well as at his rallies. He’s echoed Jones’ racist claims about Obama’s birth certificate. The New York Times has reported that Trump even called Jones after the election to thank Jones for his support. All this while Trump continues to work to delegitimize the free press.

To paraphrase a great philosopher of our time: What a f*cking idiot.