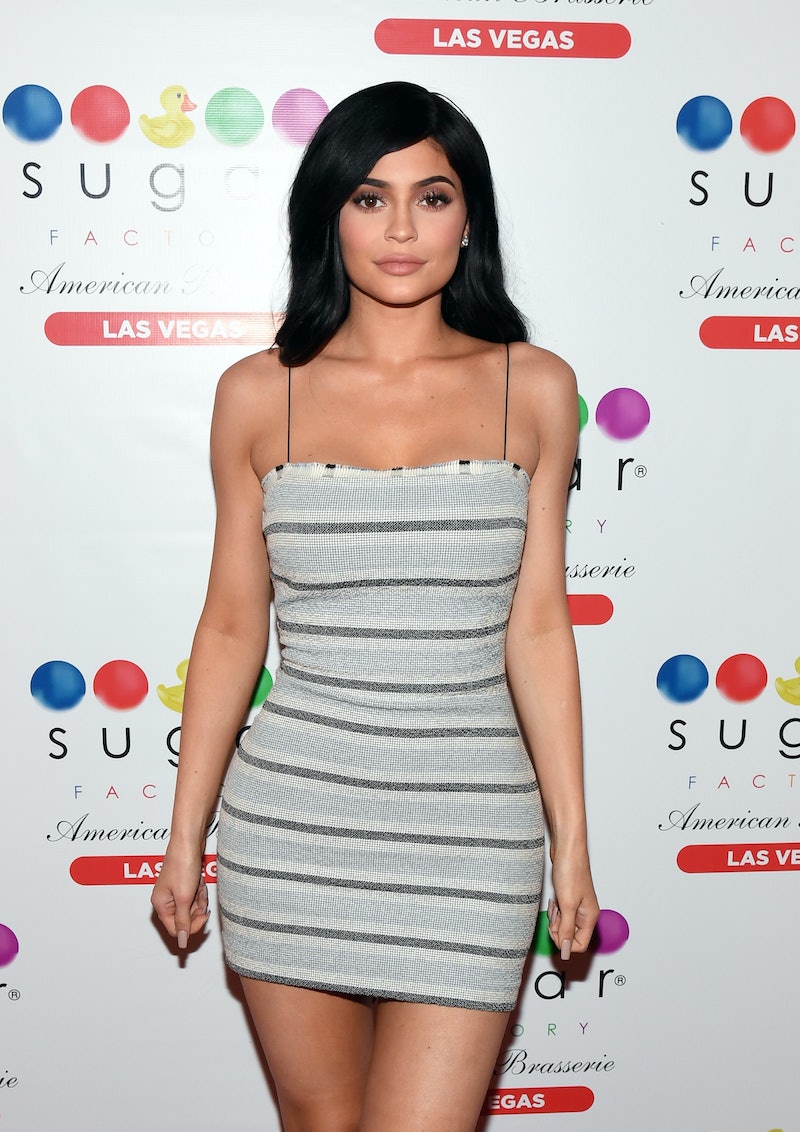 The Keeping Up With the Kardashians star has yet to confirm it herself, but on Friday, Sept. 22, TMZ reported that Kylie Jenner is expecting a baby with her boyfriend, Travis Scott. Bustle has reached out to both Jenner and Scott for comment, but has not received a response by the time of publication. While fans wait to find out if this bombshell news is actually true from the reported parents-to-be, a recent Kylie Jenner Snapchat photo may hint that there is indeed a child on the way.

According to TMZ's unconfirmed report, Jenner has begun sharing the alleged pregnancy news with friends. Anonymous sources told the site that Scott, who Jenner has been dating since April of this year, has reportedly been telling people that he and Jenner are having a girl. TMZ also noted that the pictures that Jenner has been posting on Instagram seem to not be particularly recent, hinting that perhaps she's reluctant to share a current photo with the world for some reason. But eagle-eyed Kardashian fans may have spotted a clue in one of the model's recent Snapchat photos.

In the photo, the 20-year-old Jenner is posing with her friends Harry Hudson, Jordyn Woods, and Anastasia "Stassi" Karanikolaou. She's taking the mirror selfie, dressed in track pants and a tee. It's hard to tell whether she's just wearing an oversized black T-shirt — which, Jenner is known to do — or if the bulk of that top is actually coming from a baby bump. The photo might be a hint, or it could be a bit of an optical illusion, especially since Woods and Karanikolaou are wearing crop-tops that expose parts of their own stomachs. Jenner's Snapchat post isn't proof of any kind on its own, but you can bet that fans will be obsessively zooming in until the star either refutes or confirms the reports herself.

Meanwhile, there are other resources to dig into. In October 2016, Jenner addressed some fan questions about her plans to have kids at some point in her life. (We all know she comes from a big family.) According to Life & Style, Jenner posted a Snapchat video to sate her Twitter followers' curiosity about her plans for procreation.

"I'm getting a lot of questions about kids. How many kids do I want? Do I want kids?" Jenner said. "And I do want kids, but not now."

Jenner didn't get any further into it regarding her fans' specific questions in this Snapchat Q&A, but her comments are a clue that Jenner expressed a desire for children. People do change their minds, of course, but it seems relevant that Jenner publicly spoke out on the topic. Life & Style also recalled Kylie asking Caitlyn Jenner in an episode of Keeping Up With the Kardashians about the best age to start having kids. Kylie offered 25, and Caitlyn countered with 30.

Scott and Jenner began being frequently spotted together after Jenner reportedly broke up with on-again, off-again boyfriend Tyga. But they may have been friends for a while before that, since Scott was photographed at Kylie's sister Kendall Jenner's 21st birthday party in November 2016. It's a decent bet that Kendall may have been the one to introduce them. From spring of 2017 on, Scott and Kylie have been snapped in various spots, including Scott's own birthday party.

If this Snapchat photo will be revealed to have been a harbinger of family-expanding news, then it seems that Jenner and Scott could be even more committed to each other than fans guessed. But no one will know for sure if the Kardashian-Jenner empire is growing by one tiny person, until the possible mother-to-be breaks her silence.