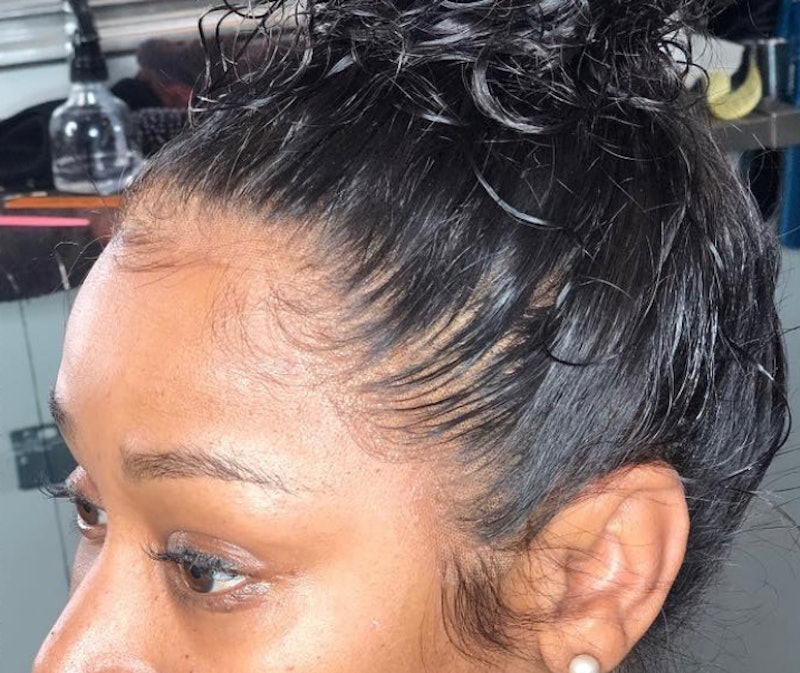 To understand how Zendaya easily goes from a pixie cut to voluminous curls or how the Kardashian-Jenners switch hair colors as frequently as they change clothes is to know the power of a good wig. Now that there's a lace-front wig going viral, the Twitterverse is realizing celebrity stylists aren't the only ones that can make a worthy hair piece.

Leave it to Twitter to do some super sleuthing and uncover one of the best lace-fronts to ever be captured on camera. We're talking a wig so bomb.com, you'll question everything you thought you ever knew about hair. It's literally the talk of the web, and it's all thanks to a Philly-based hair artist who installs bundles and lays baby hairs like it's child's play.

When a Twitter user stumbled upon stylist Porscha Weeks, known as @StylezofPorscha on Instagram, she got the internet wondering how the wig slayer performs such sorcery. And while it may seem dramatic to dub wig-making as magic, you'll find it hard to consider her talent as anything else when you catch a glimpse of Weeks' hair art.

The lace-front wig that took social media by storm is probably like nothing you've ever seen before.

The edges are swooped, the hairline is realistic, and the blending of the unit is absolute perfection. It's seriously hard to believe that not a single strand is growing from the client's scalp.

Go ahead and pick up your dropped jaw. The fact that the lace of the unit is no where in sight likely had you analyzing your screen in amazement. In fact, it's bewildering that someone could be this skilled at styling lace-fronts.

"It starts with the mind. Creating the illusion is all about craft," the hairstylist told Allure, explaining how she undergoes the installation process. "If you can channel your mind, look at someone's hairline, and say, 'I want it to look exactly like that,' that's how my brain works when I actually do the lace-front. It's a science."

Describing the hair slayage as anything, but scientific, wouldn't do the process justice. Creating a natural-looking unit obviously takes a crafty mind and considerable effort. As Weeks informed Allure, bleaching the wig's knots to match her client's complexion, plucking the unit (for hours, sometimes), crafting the edges, and more goes into styling a single hairpiece.

The hard work and attention to detail surely pays off every time, because Weeks' Instagram feed has the Twitterverse awestruck. Fans of her work could hardly contain themselves as they drooled over the "WHAT LACE?" lace-front wig making its rounds on the web.

The hilarious, but oh so true meme reactions said it all.

Clearly, girlfriend is out here performing miracles with her haven-sent hands.

Twitter users were dying to have the talented stylist bless their heads.

Her work was so incredible that it had many questioning their spending habits.

The viral tweet even had Twitter users considering relocating. The love for such impeccable wig work ran that freaking deep.

It was enough to make you wonder if the proximity of wig slayers should be an important factor when moving to another city or state.

When a unit is so good it makes you want to get a haircut, you know it's the real deal.

Weeks is obviously the truth, so if you haven't by now, it's time to give homegirl the applause she deserves.

Thou shall be shooketh by the absence of the lace.

If for nothing else, you can thank Twitter for uncovering a hair slayer like Weeks. As long as there's this sort of wig perfection going around, "What lace?" can now be the standard by which all stylists are judged.