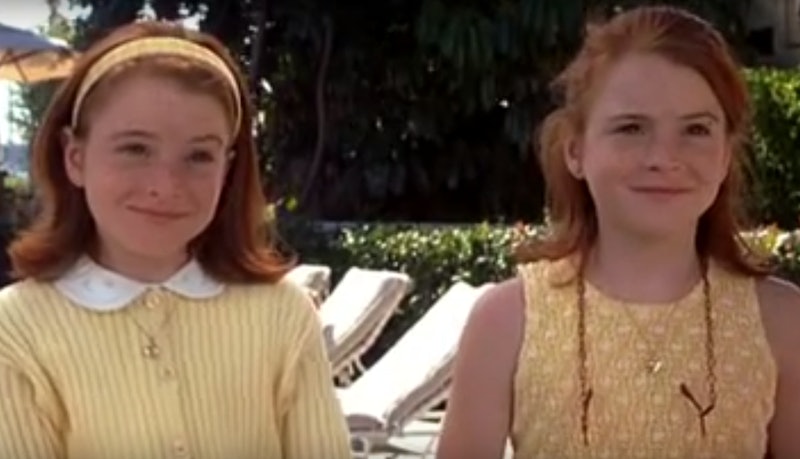 Holy Cady Heron, people. If the Avril Lavigne body double conspiracy theory had you completely shook, then prepare yourselves for some next level crazy. The Lindsay Lohan murdered twin theory is one that you're going to want to know about, because, wow, is it utterly bananas. But before we start delving into this bizarre conspiracy theory, it's time to remind you of a little movie called The Parent Trap.

Not only is it the film that officially launched Lohan's career in 1998, but it also garnered her a lot of attention for the fact that she played a set of twins in it. I think we can all agree that her performance was good. Perhaps even suspiciously so. I think you know where I'm going with this.

As the theory tells it, there was apparently a real twin sister who starred in The Parent Trap with the Mean Girls actor. Depending on which version of the theory you subscribe to, Kelsey Morgan Lohan, the apparent twin of the star, was mysteriously murdered either right before the release of The Parent Trap or sometime in 2001 when the twin is said to have mysteriously "vanished."

The first version of the theory, which speculates that Kelsey was murdered by Disney just before the release of The Parent Trap, is perhaps the most outrageous version of it. Mostly because many people who believe this version of it think that Lindsay's twin was murdered because she was simply a better actor than Kelsey. I'm sorry guys, but that just doesn't make a single bit of sense. But hell, what do I know.

The second version of the theory, however, has a bit more going for it, and I'll be damned if I didn't read the evidence and think, "I'll avenge you, Kelsey Lohan. You poor sweet, baby angel, you." As shared by The Tab, Twitter user @drugproblem laid out the definitive, extensive rundown of the dead twin theory, and it starts with some cute baby snaps of the apparent twin sisters, who definitely share minor some facial differences...

The narrative then shifts to show how the two twins started to lead radically different lives...

Until this incredibly dark post where the story takes a bleak, sharp turn.

What's most convincing about the above video is that, once you reach the 17 second mark, I can't tell whether I'm seeing two twins riding a roller coaster together or whether I'm watching a body double dressed like Lindsay's twin to mess with my mind. And yes, I've freeze framed and re-watched this moment several times, and I JUST DON'T KNOW ANYMORE YOU GUYS.

But then, it gets even creepier...

And it reaches a weird finale when you realize that Lindsey kind of played out this story in her 2006 movie, I Know Who Killed Me.

Can you hear that? That was my mind going full kaboom.

It's worth mentioning that much of the theory hinges on the supposed proof that the '90s simply didn't have the technology to make one person play twins as realistically as The Parent Trap suggests (and Lindsay having an actual twin who was murdered and written out of history, is apparently way more believable). But there have actually been successful split screen portrayals of twins played by one actor all the way back since the '40s. So, you know, take it all with a pinch of salt, eh?