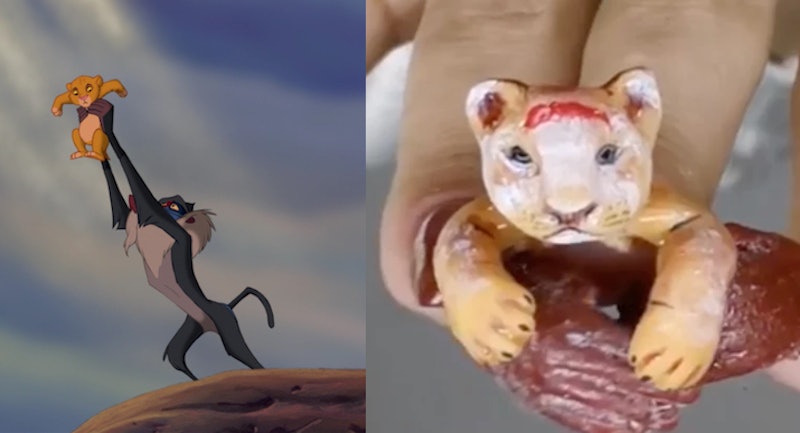 The remake of The Lion King has been one of the biggest films to hit the multiplex this summer. If you can't get enough of The Lion King in your life, you need to see this Simba x The Lion King manicure. It might be the most extra thing you've ever seen and it'll make you feel like you reside at Pride Rock. The blockbuster film features Beyonce voicing the role of Nala, which is reason enough to see it. However, the universally loved story of Simba's growth and development from cub to king is powerful, timeless, and wholly relatable. Perhaps that is exactly what inspired an immensely talented and artistic tech at Nail Sunny, the Instagram-famous Russian nail art salon chain that recently opened locations in Los Angeles, to create these epic and extra nails.

Nail Sunny has long been known for its over-the-top, outrageous, and oftentimes head-scratching nail art, which the brand routinely shares on its feed to thousands upon thousands of views and comments. The salon has created manicures that look like MAC makeup brushes. It also designed a functioning Starbucks coffee cup mani and a working cheese grater as nail art.

But the Nail Sunny team may have very well outdone itself with the spectacular and life-like Simba mani.

You can watch the manicure unfold from conception to completion in this video that was posted on the Nail Sunny official Instagram account just one day ago. The manicure features an adorable baby Simba from the iconic "Circle of Life" moment when Rafiki reveals him to all of the inhabitants of the jungle that will eventually become his kingdom. It's one of the most memorable scenes in the beginning of the film. It also translates from the silver screen to the nail bed in a fun and semi-wearable way.

The nail tech fashioned the furry hands of Rafiki, as well as Simba's tiny paws, with an incredible amount of care and detail. It truly is a marvelous sight to behold. The artisan carefully painted Simba's eyes and whiskers, too.

The nail art may seem impractical and it may make doing normal, every day tasks like writing, putting on eyeliner, or taking out your contact lenses, nearly impossible. All that aside, it's an adorable rendering from the beloved film.

In one of the frames in the two-minute video, you can see the wearer of this nail art actually typing on their iPhone. So having a mini Simba perched on a finger doesn't render them completely unable to use their digits or devices. It just might be ridiculously challenging as long as this manicure lasts.

The shot of the user tapping on the iPhone is also an effective marketing strategy — since it shuts down any of the commenters asking a bunch of questions about how to do anything with nail designs such as this. One thing is for sure, though. The Simba manicure is a conversation starter and ender.

If you aren't ready to "go there" and get a Simba manicure, you can certainly represent and show your love for the story, the film, and Simba's squad with any of The Lion King merch collabs. There are plenty of ways to get your Lion King on – quite literally.

More like this
Dua Lipa On YSL Beauty, Plus Her Fearless Approach To Hair & Makeup
By Erin Stovall
All The Products Hailey Bieber Used For Her Birthday Makeup Look
By Olivia Rose Ferreiro
The 117 Best Black Friday Beauty Deals Of 2022 To Shop
By Audrey Noble
M.A.C. Cosmetics' Black Friday 2022 Sale Includes Major Lipstick Deals
By Audrey Noble
Get Even More From Bustle — Sign Up For The Newsletter