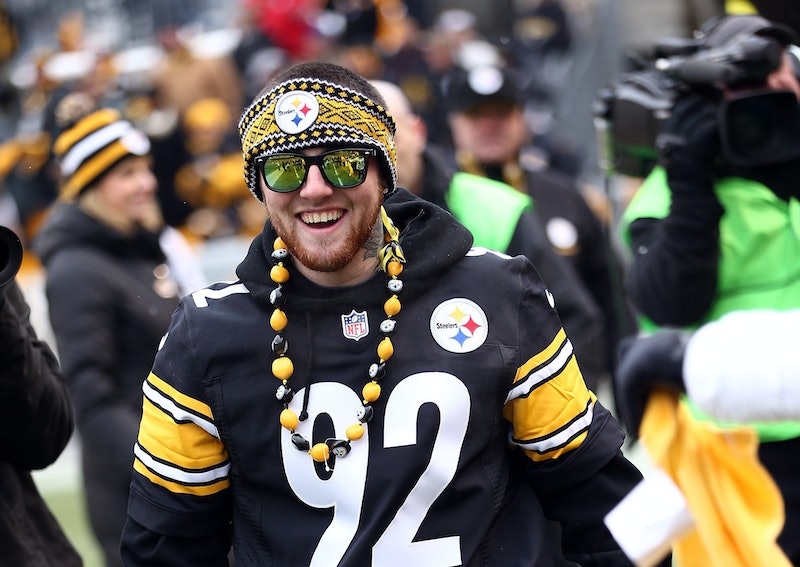 The Pittsburgh Steelers decided to honor one of their biggest fans on Sunday, Sept. 16 in a move that's sure to make you a little emotional. According to Entertainment Tonight, the Pittsburgh Steelers paid tribute to Mac Miller during their first home game of the season. And they honored the late rapper in pure style.

According to ET, running back James Conner donned a pair of cleats that featured multiple nods to the "Self Care" rapper. In a series of photos that he posted to Twitter, Conner showed off the decked-out shoes that featured photos of the singer, along with, "Thank you Mac," written on the sides. As ET went on to note, he didn't just show off the footwear, he actually wore them during the team's game against the Kansas City Chiefs.

That wasn't the only tribute to Miller from the Steelers, though. According to ET, the team played one of his most popular songs, "Knock Knock," which was the lead single off of his 2010 mixtape K.I.D.S, at the Sept. 16 game.

Additionally, soon after Miller passed away on Sept. 7, the team honored him online. On the official Steelers Twitter account, they captioned a photo of Miller dressed in his Steelers fan gear with, "RIP Mac Miller. Thanks for being a great Steelers fan." It's very moving to see the Steelers honor him in these kind ways.

As E! News reported, Miller was a huge fan of the Steelers, seeing as though he was born and raised in Pittsburgh himself. He went to his fair share of football games when he wasn't on the road touring, as the Steelers account would always highlight.

He even took part in some of the fun game rituals like the Terrible Towel twirl, which the team wrote about in September 2015. In September 2016, Miller was there to support the Steelers during their home opener game, as revealed in a short clip from the team.

According to an old Instagram post from his mother, Karen Meyers, it's clear that rooting for the Steelers is a fun family pastime. In the snap, Miller and his mom can be seen hugging at a game they attended in November 2017. She captioned the sweet photo with yellow and black heart emojis that aligned with the Steelers' colors, of course.

In a game day interview in December 2017, Miller discussed his love of the Pittsburgh-based team and why he always made the effort to attend their games. "It's the most important thing in my life probably. It goes Steelers first, always," he said at the time, "It's just incredible to feel the energy in the stadium and also be a part of it, you know? Do it whenever I can, man."

In light of Miller's unfortunate passing, it's nice to see the Steelers honor the rapper, since the team meant so much to him. As previously mentioned, the musician passed away on Sept. 7 at the age of 26. TMZ was the first to report the news.

Miller's death caught so many off-guard and left just as many feeling torn up over the sad news, including the Steelers. Yet it's clear that the team was able to channel that emotion into some incredibly moving and touching tributes to one of their biggest fans.