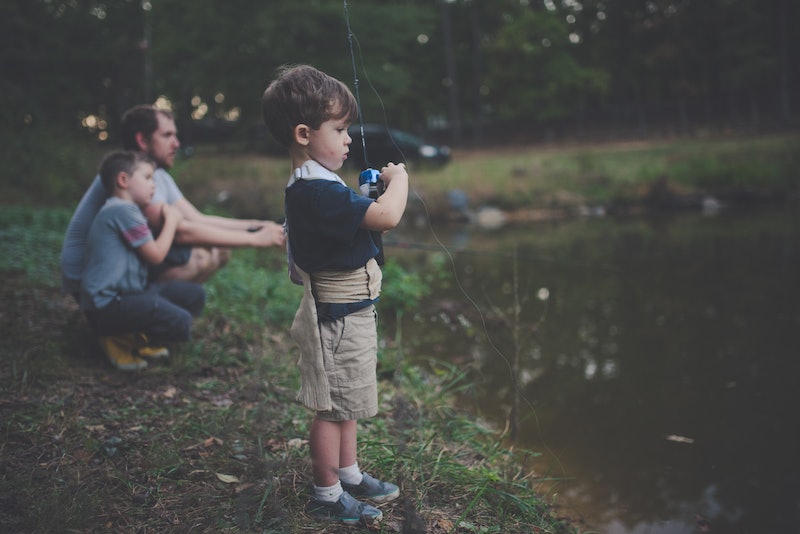 We’ve all heard our fair share of ugly divorce stories, but here's one that’s actually hopeful. This Boston dad’s Facebook post about celebrating his ex-wife’s birthday will give you major #parentinggoals — and a good lesson in civility and kindness. In a post that has gone viral to the tune of more than 700,000 “likes,” Billy Flynn Gadbois explains that he’s nice to his ex because it’s good for his kids. Simple as that. Although maintaining a good relationship with an ex can be difficult, Gadbois argues that, when you have children, it’s essential for divorced people to model kindness and compassion toward each other (and really, that should be considered essential for all parents, whether they are together or not). UPDATE: This article has been updated with comment from Billy Flynn Gadbois.

Gadbois, 36, is a lawyer, model, and father of two boys. Back in October, he posted on Facebook about helping his sons celebrate their mom’s birthday. He wrote,

It's my ex-wife's birthday today so I got up early and brought flowers and cards and a gift over for the kids to give her and helped them make her breakfast. Per usual someone asked me why the hell I still do things for her all the time. This annoys me. So ima break it down for you all.

I'm raising two little men. The example I set for how I treat their mom is going to significantly shape how they see and treat women and affect their perception of relationships. I think even more so in my case because we are divorced. So if you aren't modeling good relationship behavior for your kids, get your sh*t together. Rise above it and be an example. This is bigger than you.

Can I just say?

Love What Matters reposted Gadbois’s story last week, and the post struck a chord with hundreds of thousands of readers.

Gadbois told TODAY that he and his ex-wife are committed to maintaining a civil relationship. “We decided early on that we were going to put the effort into co-parenting,” he said. “We just think it's really important to show each other respect and care in front of the kids. Kids want to take care of their parents, and they can’t do it alone. So if it's Mother’s Day and the kid doesn't have anything to give to his mom... that doesn't feel so great.” Gadbois said that his ex also makes sure that their sons have gifts for him on Father’s Day.

Divorce is hard, and every divorced couple has its own challenges. But Gadbois emphasizes the importance of setting a good example. “I'm not saying everyone needs to help the kids make breakfast,” he told TODAY. “But the message people are getting is that you can show each other respect and care in front of the kids, and help the kids care for that parent, regardless of how you feel about each other.”

More than 22,000 people have taken to Facebook to comment on the post, often describing their own experiences and offering advice. One reader commented, “When parents can't stay married, it's vital they give their kids permission and opportunity to love the other parent. Just because they're done with each other doesn't mean the kids are.”

Gadbois tells Bustle that much of the response he's gotten has been positive. "I feel so lucky to have made a difference in some lives by provoking thought," he says. Though some readers have reacted negatively, Gadbois doesn't take it personally. "When you force people to look in a mirror and question themselves its always going to be easier for them to discredit you than to consider they might be wrong, especially when changing requires effort and setting yourself aside. ... I'm content with the knowledge that no matter the reaction it at least made them think about it and maybe that'll stay somewhere in the back of their minds!"

Ultimately, Gadbois hopes that readers will focus on their kids. "Don't get hung up on the actions I describe or trying to compare your situation to mine or anyone else's," he tells Bustle. "That's not the point. Focus on what your kids are seeing between you and your ex-spouse and think of how that will affect them now and their future relationships." Wise words!