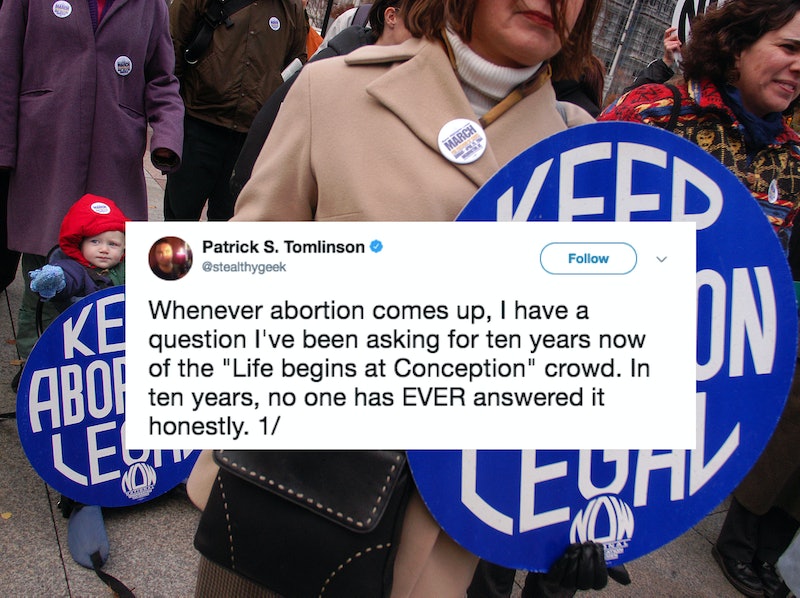 Patrick S. Tomlinson has a question for you. Last week, one of the science fiction author's Twitter threads went viral for undermining a central argument against abortion: That life begins at conception, therefore, a human embryo is the same as a human child, and to "kill" an embryo would be like killing a human child. But Tomlinson isn't buying it. A decade ago, he came up with a scenario which undercuts this idea, and he says he's never gotten an honest answer to the question it raises. (Bustle has reached out to Tomlinson for comment, and will update if we hear back.)

"Whenever abortion comes up, I have a question I've been asking for ten years now of the 'Life begins at Conception' crowd. In ten years, no one has EVER answered it honestly," Tomlison tweeted.

Tomlinson goes out to lay out a scenario in which you are in a fertility clinic when the fire alarm goes off. Before you escape, you can either save a five-year-old child who is crying for help, or a container of "1000 Viable Human Embryos." "Do you A) save the child, or B) save the thousand embryos?" Tomlinson asks. "There is no 'C.' 'C' means you all die."

In a decade of asking this question, Tomlinson claims he's never gotten a straight answer from people opposed to abortion: "They will never answer honestly, because we all instinctively understand the right answer is "A." A human child is worth more than a thousand embryos. Or ten thousand. Or a million. Because they are not the same, not morally, not ethically, not biologically," he tweeted.

"No one believes life begins at conception. No one believes embryos are babies, or children. Those who cliam (sic) to are trying to manipulate you so they can control women," he goes on to say, urging his followers to call out those opposed to abortion for their hypocrisy.

Not surprisingly, Tomlinson's tweets elicited strong responses from those on both side of the abortion debate, though some responders seemed to... miss the point. One man, for example, tweeted that he would save the five-year-old, and said, "Your parable doesn't portray our position fairly. Huge difference between a potential human person and a five year old."

"Exactly," Tomlison responded. "Thank you for agreeing with me."

"I am a person of whom you describe. In this horrible situation, I would take the embryos. Save 1000 people verses 1. Isn’t it a no-brainer?" wrote another man (I will, for now, gloss over how problematic it is that a bunch of dudes are passionately debating what women can and cannot do with their bodies — that is a whole other article).

"Thank you for your honesty about being an amoral monster who should never be allowed around children. That was very brave of you," Tomlison responded.

Tomlison's question isn't a perfect parable, and it's a bit simplistic — notably absent from this scenario, for example, are the mothers whose health, independence, and physical sovereignty should be at the center of any abortion debate. It also ignores abortion's long, complicated history in the United States, one that is inextricably tied to issues of racial and gender oppression. But then again, Twitter is not the place to go for fully fleshed-out, nuanced arguments. Doing so is part of what landed us in this disastrous political environment in the first place.

His question is still valuable, though, because to be able to have real, productive conversations about delicate issues like abortion (as well as race, gender, economic inequality), we need to be able to brutally honest — with each other, and with ourselves.

More like this
On TikTok, #SeñoraEra Shows Latinx Users Becoming Their Mothers
By Natalia Perez-Gonzalez
12 Cheeky Instagram Captions To Use When You Haven’t Posted In Weeks
By Emma Carey
The “Teenage Dirtbag” Trend Is TikTok's Latest Nostalgic Obsession
By Meguire Hennes
13 Selfie Instagram Caption Ideas That Exude Main Character Energy
By Jessica Booth and Emma Carey
Get Even More From Bustle — Sign Up For The Newsletter