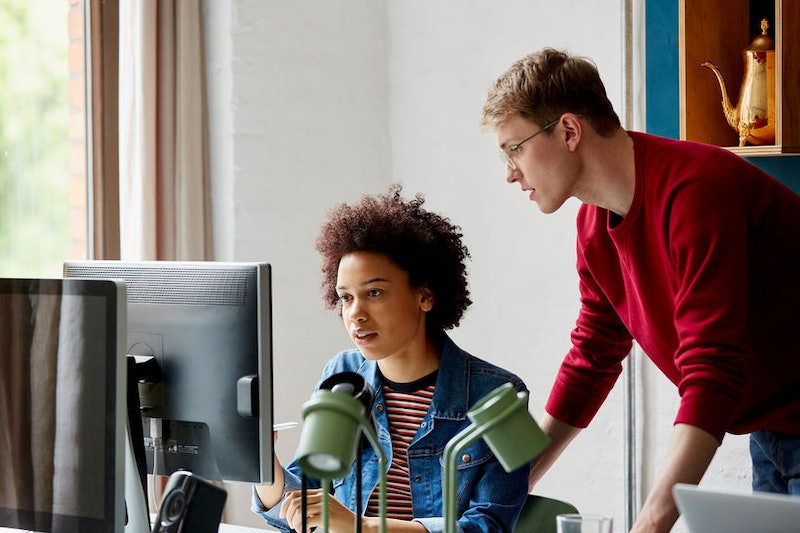 It is one of those buzzwords of our generation isn't it? Up there with endless acronyms, the word problematic, and of course the ubiquitous babes. However, debate as to what mansplaining is, or if it's even an issue that deserves our attention, has been rife. But y'all it really isn't that hard to identify it while it is happening, so how do we help show the difference between condescending or simply explaining while also happening to be a man? Thankfully, one savvy woman has created a chart to explain mansplaining.

It is a bit of a frustrating area for all involved as we know men are not necessarily meaning to be malicious d-bags, but holy effing moly, it is hard to put into words the all encompassing and eye bulging rage a woman feels when she is being told something she already knows by someone who assumes she doesn't.

Let's start with naming this hero, Kim Goodwin. Goodwin is Vice-President, Design and General Manager at Cooper, leading an integrated practice of interaction, visual, and industrial designers. She is an expert in her field consulting for clients in all kinds of different industries, including retail, aviation, and consumer electronics.

Add to this that she is the author of a bestselling book, Designing For The Digital Age. So all in all, she is a bit of a boss in her chosen field, and quite the impressive professional. However, multiple times she has found herself in a situation where she has had a man explain to her various elements of her career, including things she has explained in her bestselling book. So she basically decided, enough of this BS, let's give our male contemporaries a chance at avoiding mansplaining.

The main theme of the chart is like, did this woman ask for you to explain something? Are you making assumptions regarding this woman's ability to do something? And the doozy: does underlying and ingrained gender bias make you assume one or both of the above?

Odds are if you are a woman, you have experienced heavy doses of mansplaining. So much so, that for many (including myself) it has become a bit of an ongoing joke. With mansplaining becoming the byword for condescension, and assuming someone is a bit dim.

SNL did a pretty amazing sketch in which the two female stars Scarlett Johansson and Aidy Bryant, were mansplained by two male costars, the issues faced by women. They constantly speak over the women and don't actually let them talk. Does this sound familiar? Yep thought so.

Back when it first emerged in July 2018, the chart itself went viral, and of course there were some nay-sayers, who pointed out that condescension has no gender. And they are right, condescension really doesn't belong to one gender, however I can assure you that it definitely happens more in one direction. Goodwin herself points it out saying

Charts like this one are important because they start conversations and educate, as opposed to writing people off completely as sexist tools for incessant mansplaining or other learned behaviours. Like y'all, despite how it might seem most people genuinely don't want to be complete butt-heads. One male Twitter user tweeted Goodwin to say they have printed, and even framed the chart for their office.

Hopefully as time goes on, mansplaining will become increasingly a thing of the past, like outdoor plumbing and the plague. However, until then, go on and print this for your office/house/common area and potentially save a lot of people a lot of anguish.