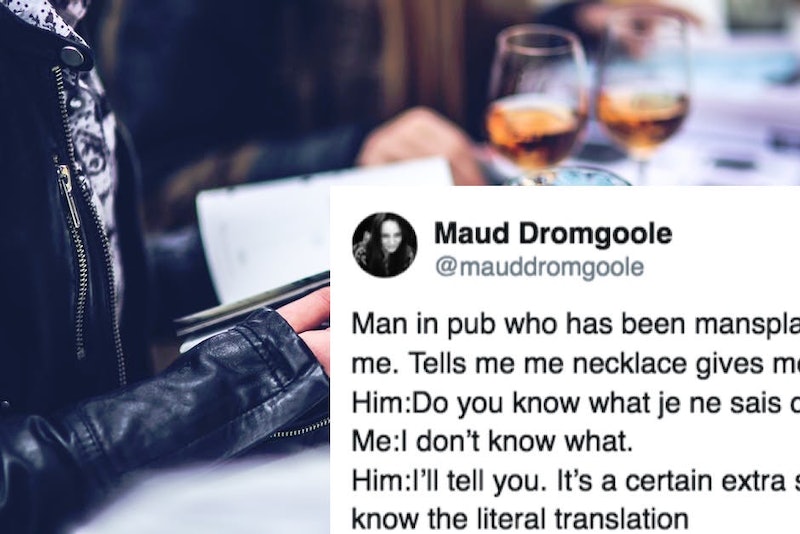 Meet Maud Dromgoole. Maud lives in London. She also works in a bar. Due to working in a bar, Maud is automatically subjected to more humans than most of us interact with in a day — including, of course, everyone's least favorite brand of human: the mansplainer. At the very least, though, this circumstance has afforded us the most perfect example of mansplaining I think I've ever seen — when one male customer tried to explain a French saying to Dromgoole, and storytopped every mansplainer who has ever mansplained.

But let's back up. In case you're not yet familiar with the term (i.e., if you live on the island with Wonder Woman's fam), mansplaining is when a man explains something to a woman that she already knows, or is even an expert in, and does so in a condescending or belittling manner. For example, when a male friend tried to explain to me how the female orgasm works, I was being mansplained to. Ask any woman, and she can probably list, off the top of her head, a number of mansplaining experiences she's been on the receiving end of. It might seem harmless but points to a much larger issue: that men overwhelmingly think women are unaware and need to be corrected and educated.

Now, Dromgoole is chiming in with her own experience with being mansplained to, in a situation that happened at the bar where she works. It wasn't the first time it happened, and it probably won't be the last. I can't make this stuff up. Behold: internet gold.

In case there is any confusion, the literal translation of the French phrase "je ne sais quoi" is "I don't know what."

Man asks Dromgoole if she knows what "je ne sais quoi" means. Dromgoole correctly replies. Man doesn't know she gave him the correct answer and continues to explain it to her.

BUT WAIT. It gets better. We all know the best/worst part of any social media post is the comments section; and sure enough, as Dromgoole's tweet continued to go viral (collecting over 21,000 retweets and more than 97,000 likes at the time of this article), all kinds of beautiful responses flooded in. Plenty of people got behind Dromgoole in what might be the largest collective eye roll in the history of the universe.

Not everyone was ready to get behind Dromgoole, though. In fact, the first response I saw to her tweet was this beaut, blaming her for the whole thing.

All together now: None. Of. This. Excuses. His. Behavior. (And for the record, people of the internet, she was the only one working at the time and couldn't exactly leave.)

Here are a few more good ones.

I was able to chat with Dromgoole via email, where she shed a little more light on the situation, telling me that this kind of thing happens a lot. I asked if she calls out the men who mansplain to her, to which she said, "... generally no. I called out a man in the pub the other day who was quite aggressively teaching me about Brexit. He asked me a series of apparently rhetorical questions. 'Do you know who your MEP is?' 'Do you know how much money we waste on the EU?' 'Do you understand how democracy works?' and then steamrolled through my answers without listening. I told him to stop speaking over me and engage with my opinions if he wanted to debate it — but he didn’t. I took a cigarette break and another man came out saying, 'I just want to apologise for my gender.'"

While most of the responses to her original tweet have been positive, Dromgoole has of course noticed all the naysayers: "To be honest, I found the negative tweets I’ve received pretty typical and have quite enjoyed having my battles fought for me by the overwhelming number of men and women who have disputed them." There's one button Dromgoole told me she's avoid clicking, though:

"God knows what goblins dwell there," she says.

Oh, you know, probably messages similar to the ones I get from random people that go to that hidden Facebook folder.

Mansplaining. It's real. It's sexist. It's called mansplaining because men so commonly think women need things explained to us that we're already knowledgable about — like abortion and miscarriage and the female body and feminism and sexual harassment and our jobs and OMG somebody stop me because I could go on forever. Listen, fellas: if a woman expresses interest in something she doesn't know about that you do know about, and you have a conversation where you explain it to her and she happily listens, you won't hear anyone yell, "MANSPLAINER!" But the instant you utter a word about how our reproductive system works, a topic we are already fully educated on, or one of the other ideas mentioned above, well, prepare someone to tweet about it and then go viral.