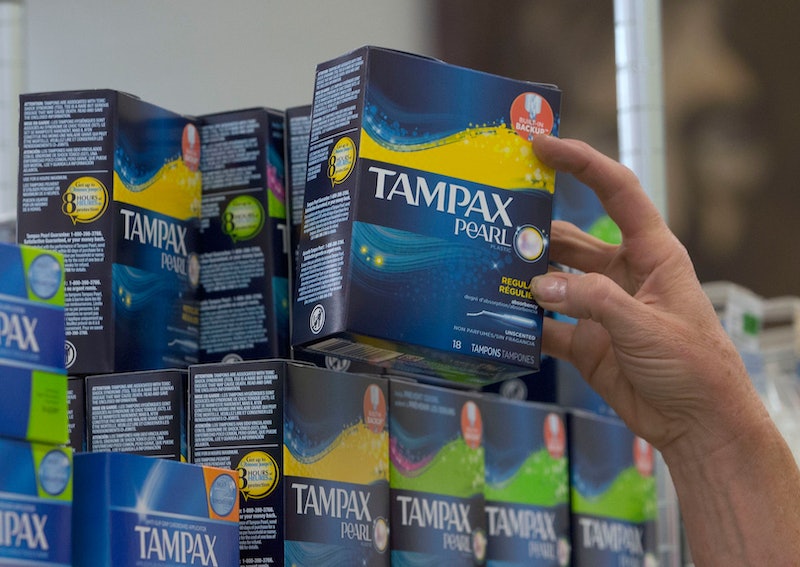 This week, the House passed legislation that would allow people who menstruate to buy pads and tampons with money they've put in health flexible spending accounts (FSAs), according to USA Today. Though you'd have to have health insurance from an employer to use a flexible spending account, the legislation is a small move forward in the fight for more affordable menstrual products.

Affordability is exactly what Democratic Rep. Grace Meng, of New York, had in mind when she authored the measure, which is part of a larger bill that's now headed to the Senate. "The passage of my legislation is a major leap forward in our fight for menstrual equality,” Meng said in a statement. “Menstrual hygiene products are essential and necessary for women, and deserve to be items that are permitted to be purchased with health flexible spending account funds.” Companies with more than 100 employees would be required to provide FSAs that would cover menstrual product costs, The New York Times reported.

The legislation will also cover more than just tampons, according to Meng's House webpage. The funds allocated to health FSAs — pre-tax accounts where employees put money for out-of-pocket health costs — could also be used for, "liners, cups, sponges," or other similar items that people who menstruate might use. Though women will benefit significantly from the legislation, non-binary and trans people who get periods could also see savings. It's not yet clear though whether the legislation will only allow cis-women to use FSA funds to pay for period products.

Then, when you add up the costs of Midol for cramps, heating pads, acne medication, panty liners, tampons, new underwear, and birth control, the average a cis woman spends on her period throughout her lifetime comes to $17,259. (HuffPost added in another $912 for chocolate expenses, but that amount seems debatable.)

Additionally, people who menstruate are slapped with another cost that doesn't apply to all personal care products: sales tax. And that's what Meng's House legislation seeks to stop. According to NPR, Viagra, ChapStick, and dandruff shampoo are all exempt from sales tax. The "tampon tax" as its come to be called is just one example of the larger "pink tax," which is a higher tax that women pay for the "women's version" of items that also exist for men. In California, for example, Assemblywoman Cristina Garcia's office found that California women pay over $20 million annually in taxes on menstrual products, despite the fact that their bodies require them to purchase such products, according to The Washington Post.

"Basically we are being taxed for being women," Garcia said when she announced a bill to abolish the tampon tax in her state (a bill that was later vetoed by California Gov. Jerry Brown).

After Gov. Andrew Cuomo announced in April that New York schools would provide free menstrual products in restrooms for girls, Meng's House measure is another effort in the fight for "menstrual equality" — or just the basic recognition that people with periods are biologically damned to paying more for basic necessities.