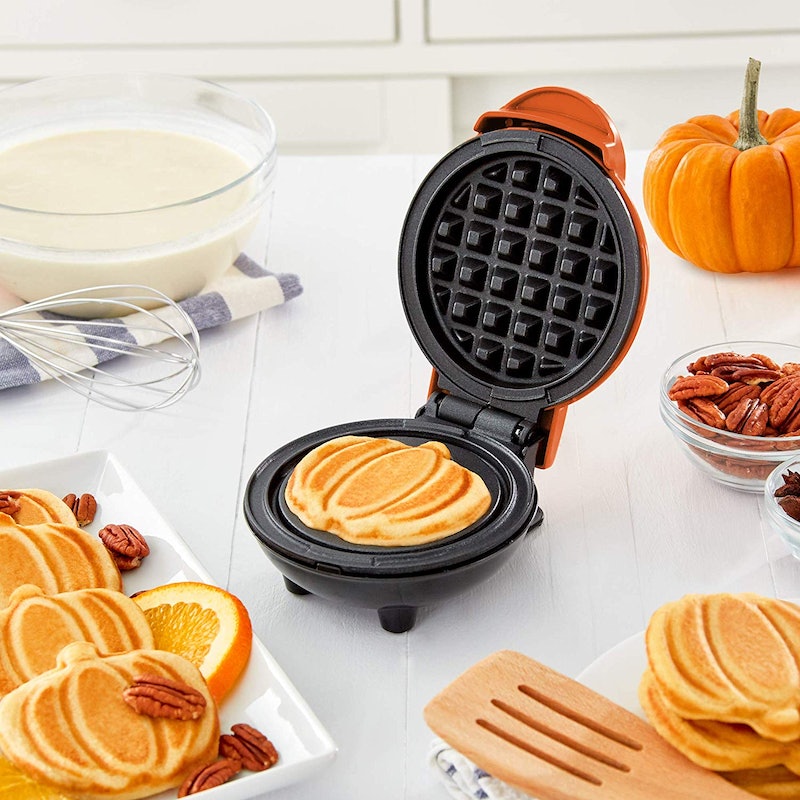 Fall means a lot of things. It does not only mean sweater weather. The season brings a cozy change to both our wardrobe and our appetites. It's not an ice cream cone that we're craving to satisfy an indulgence. It's anything with a deep, robust spice. Anything pumpkin. Or, pumpkin shaped. You'll be pleased to hear that a Mini Pumpkin Waffle Maker exists and it's the only new kitchen cookware you'll need from September to November. And, yes, this very fall news justifies pulling out at least one cable knit sweater from storage.

This Mini Pumpkin Waffle Maker will bring all us Autumnal lovers pumpkin spiced joy. You don't have to only bake pumpkin waffles in this mini maker, but, why would you want to bake anything else? Tis the season for crunchy leaves, lattes and the most Instagrammable brunches of the year.

The Dash Mini Waffle Maker is not only fit for batter. It can press your sandwiches into a pumpkin shaped panini or turn your hash browns into a pumpkin shaped breakfast side. The waffle maker itself weighs one pound, meaning you can tote this kitchen gadget from kitchen to kitchen like it's fall's hottest accessory. Because of its non-stick surface you can be sure that each waffle you unearth will be as golden as the one before it. Your entire breakfast table is about to turn into a pumpkin waffle patch. The Mini Pumpkin Waffle Maker is available on Amazon and retails at $9.99.

People, unsurprisingly, are falling in love with this little waffle maker. It's, according to Amazon, the #1 best seller in the Home & Kitchen category. Not that that's hard to believe. One reviewer calls it "small, but mighty." Another reviewer remarked, "I had no idea what a small waffle maker could do for my life. LOL." Yes, great things sometimes come in small packages. Most great things usually come as the pumpkin version of itself. Case and point: mini pumpkin waffle maker. However, if you're not feeling festive, Dash also has waffle makers that produce regular shaped mini waffles.

In case you're not sure how to whip up your own waffle batter, or need inspiration, the Dash Mini Waffle Maker comes equipped with its own recipe book. Don't wait for Halloween to roll around to start dishing out pumpkin shaped waffles. Heck, don't even wait for the first fallen leaf! Now is the time to get into the fall spirit — even if, according to weather, it's not the time for sweaters and knee high boots.

Don't let the date on the calendar deter you. Fall flavors are already hitting shelves and appearing in restaurants. When you see them, enjoy them. Oreo's Maple Cream flavor for fall 2019 are expected to arrive in stores soon and being a limited edition treat they won't last forever. Do not hesitate upon crossing them in grocery stores. Likewise, Burger King's Maple Waffle Breakfast Sandwiches are officially in rotation at participating locations and this is not something to sleep on.

Fall only lasts for so long. The pumpkin season is fleeting. Don't waste a minute on regular waffles. Start living the pumpkin lifestyle immediately with these squash shaped waffles for breakfast, lunch and dinner.