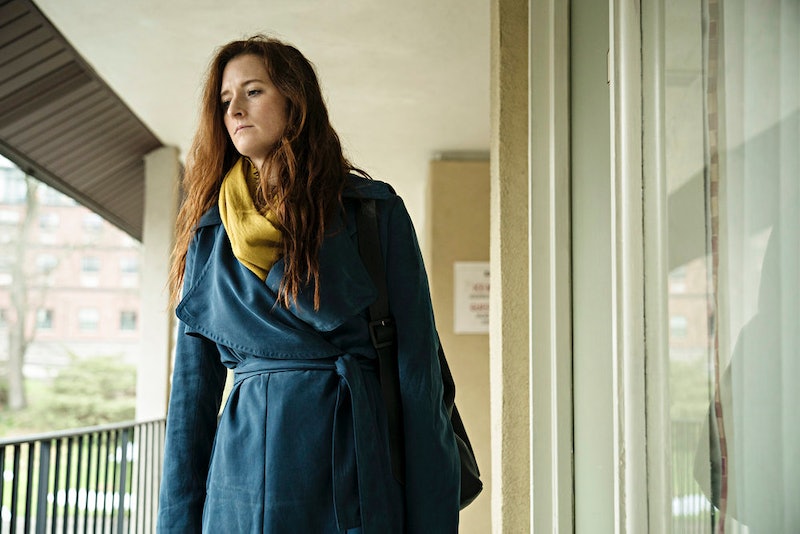 With only three hours and two episodes of story left, time is running out for fans to craft elaborate theories about the puzzle box that is Mr. Robot. And although Whiterose may claim she can hack time, viewers can't. So this Mr. Robot plane theory might be one of the last viewers come up with before the series ends — which is fitting, considering that if it turns out to be true, it would spell the end for more than one major character on the show.

The end of Season 4's tenth episode, "410 Gone," gave a central character an unexpectedly satisfying and (seemingly) final conclusion. Although Darlene and Dom were supposed to flee the country and fly to Budapest together, Dom found herself unable to go through with it; but in a last-minute twist, Darlene ditched the plane while Dom ran to catch it. Missing each other by mere seconds, Dom was the one who ended up on the plane, while Darlene was the one left behind.

While on one level, this ending was sad for fans who were hoping to see Darlene and Dom (or "Domlene," as they're affectionately referred to) end up together, it was supremely satisfying on a character level. Both Darlene and Dom got exactly what they needed: Darlene, who always ran away, finally stood her ground, decided to stay, and found strength in herself; Dom, an insomniac whose life was so consumed by her work that she had no life, finally left that work behind… and slept for the first time in months.

But if this theory pans out, Dom's restful slumber might not last much longer — and that happy ending might turn sour very quickly. Long before that episode, eagle-eyed fans were whispering about the possibility of a tragedy ahead involving an airplane. While the foreshadowing was heavy, the exact nature of that tragedy wasn't clear… until Darlene and Dom headed to the airport.

As Reddit user signsandwonders points out, the foreshadowing around planes has been there for several seasons: there have been images of Darlene juxtaposed next to toy planes, she used the phrase "I'm going to crash with a friend upstate," and Dom was shown to have a poster of Patsy Cline on her wall. (Patsy Cline famously and tragically died in a plane crash on March 5, 1963. The date on Dom's fake passport? March 6 — echoing the popular "off-by-one" theory of Mr. Robot. But that's a theory for a different day.)

Then of course, there's the reference to the fact that Whiterose previously had one of her enemies — the CEO of Evil Corp before Philip Price — killed by bringing down an entire commercial jet liner, murdering hundreds of innocent people in the process. If she did that once, she could surely do it again. Dark Army operative Irving may have claimed that Dom and Darlene were truly off the hook and that he was really just there promoting his new book — but on a show as carefully constructed as Mr. Robot, could such a massively convenient meeting really be a coincidence? Or could he have been at the airport for some other reason… say, to plant a bomb on a plane?

If that's the case, it could have huge ramifications for the show's endgame. Darlene and Whiterose certainly aren't friends, but now that she and Elliot have successfully executed their hack against the Deus Group, it's clear that Darlene feels a sense of closure with their mission. Elliot's the one who feels the need to visit the Washington Township Plant and destroy Whiterose's project, not Darlene. But what better way to draw Darlene back into the conflict than to kill off Dom, someone she had grown to love and care for deeply?

Not only would Dom's death motivate Darlene to get back in the game, but the plane crash itself would provide effective cover for Darlene's future movements. If Whiterose assumes that Darlene got on that ill-fated flight, she would also assume that Darlene is dead — and that assumption may give Darlene all the time she needs to surprise the Dark Army leader and finish her off once and for all.

Wouldn't it be satisfying if, while Whiterose is so fixated on Elliot, it's Elliot's sister who (literally) slips in under the radar and strikes the killing blow? Wouldn't it also be satisfying if Whiterose ends up being the unwitting engineer of her own destruction? In attempting to tie up a loose end — a loose end that would have been content to leave her well enough alone — Whiterose may have created the very monster that will destroy her.