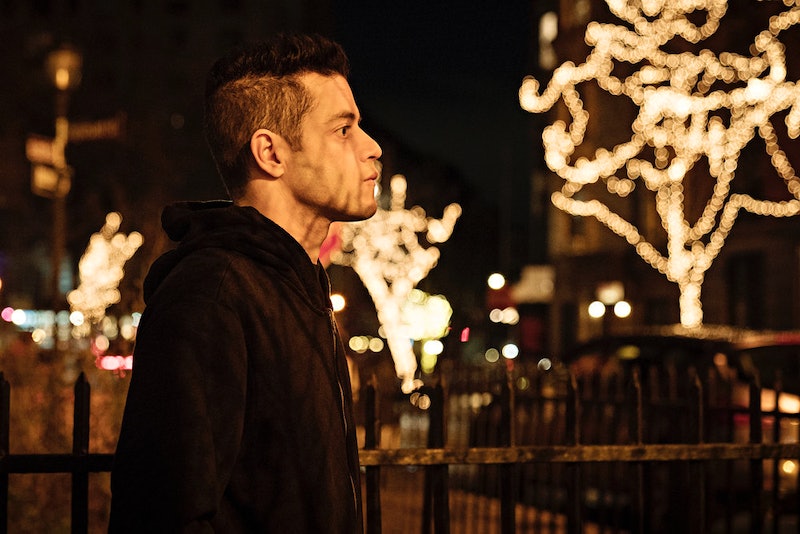 As Mr. Robot's final season winds to a close, there are no lack of theories surrounding the identity of Elliot Alderson's hitherto unseen third personality. But what about the identity of Elliot himself? One Mr. Robot fan theory posits Elliot isn't exactly who he appears to be — and if true, would mean the show's title is even more literal than we thought.

With only four episodes left until the series finale, the exact nature of Whiterose's mysterious experiment has yet to be revealed. Will it send the series in a wildly new sci-fi direction? Will it turn out to be surprisingly banal? Or will it forever remain frustratingly vague? Most theories about the machine — formerly held in the Washington Township Plant and now en route to the Congo — involve a means to reset the timeline and bring back those who are dead, either through time travel or via access to a parallel universe. But what if Whiterose's experiment involves something a little less Back to the Future and a little more Artificial Intelligence?

Reddit user mister--mist 90 posits that Whiterose's master plan doesn't involve a time machine or a wormhole to a different reality, but rather something a bit more grounded in our real world: cognitive computing. According to Forbes, "the goal of cognitive computing is to simulate human thought processes in a computerized model. Using self-learning algorithms that use data mining, pattern recognition and natural language processing, the computer can mimic the way the human brain works." Some believe this represents the third era in computing — the first being the ability to do simple sums, and the second being the ability to run programmable systems.

True cognitive computing would look a lot like our Siris and Alexas, except instead of merely spouting a number of pre-programmed responses, they would truly understand language, emotion, and nuance, and respond organically and authentically. Basically, they would act like humans, except with an infinite capacity to gather and process massive amounts of data. Mister--mist90 theorizes they also look a lot like… Elliot Alderson.

"The Elliot we are seeing might be a fictional one," the fan writes. "An artificial Elliot. An artificial construct... A simulation of a human?"

Now, that doesn't necessarily mean that Elliot is a machine. He's clearly still a flesh-and-blood person who bleeds when punched and who cries when hurt. But perhaps, in a sci-fi twist, Whiterose discovered a breakthrough in cognitive computing that allows her not just to program human-like computers, but to "program" a human brain itself and plant sophisticated systems inside of it. Systems that are so lifelike they would fool even the host.

We know that something happened to Elliot before the start of the series that led him to forget everything about his life, including his own sister. What could have caused this massive memory wipe? Might Elliot, overcome by pain and despair over his traumatic past, have submitted himself to Whiterose's experiment in order to forget about the abuses he'd suffered at the hands of his father? Might Whiterose then have "programmed" Elliot's brain with several systems running simultaneously — one of which takes the shape of Mr. Robot and one of which has yet to be revealed — in order to execute her own plan?

While it's true Elliot's split personality initially manifested much earlier in life, perhaps that was a result of experiments that were, unbeknownst to Elliot, already being run on him during his father's employ at the Washington Township Plant. Perhaps the event that occurred immediately before the start of the the series was merely the completion of this experiment that had begun when Elliot was a child — the final implantation of Whiterose's programming inside his mind after it had already been shaped and readied to receive it.

In Elliot's withdrawal-fueled dream sequence back in Season 1, Angela told her childhood friend that he'd been "born one month ago." It's never been clear what exactly she was referring to, but perhaps she was referencing this hypothetical re-programming process Elliot subjected himself to shortly before the start of the show. That would also explain why Elliot, an admittedly excellent hacker, is occasionally able to pull off seemingly impossible feats, like completing Whiterose's shipping request to the Congo in one hour when the powerful hacker and her entire Dark Army couldn't accomplish it even without time constraints.

If this turns out to be true, then Mr. Robot wouldn't just refer to Elliot's most prominent alter ego — but also, in a way, to Elliot himself. It would also transform the story from a paranoid hacker drama into a new take on the age-old tale of artificial intelligence rising against its creator. Everything Elliot's alter ego did — planning the 5/9 hack, bringing down Evil Corp, executing the disastrous Stage 2 — would literally have been something Whiterose had programmed him to do, pulling the strings from behind the scenes this whole time. It would also mean that everything Elliot himself has done since — trying to undo the hack, struggling (and failing) to stop Stage 2, and targeting the Dark Army and the Deus Group — would be an example of Elliot rebelling against his programming.

Elliot has always been a man at war with his own mind, and this theory could help explain why. His brain is fighting back against the unnaturalness of having been re-programmed by an outside source, and his split personality is a result of implanted programs running on their own orders, occasionally against his own desires or better judgment. If this is true, will Elliot be able to overcome his programming in order to defeat Whiterose once and for all? Or does Whiterose hold a master switch to Elliot's brain that, with one touch, could send his mind back to the blank, obedient slate it was in at the beginning of the series?

More like this
You Might Want To Rewatch This Key 'On My Block' Scene To Understand 'Freeridge'
By Grace Wehniainen
The 'Freeridge' Cast Shared Their Hopes For A Potential Season 2
By Grace Wehniainen
A 'Terminal List' Sequel & Spinoff Are Reportedly In The Works
By Kadin Burnett and Grace Wehniainen
This 'One Tree Hill' Wardrobe Error Is Going Viral On TikTok
By Brad Witter
Get Even More From Bustle — Sign Up For The Newsletter
From hair trends to relationship advice, our daily newsletter has everything you need to sound like a person who’s on TikTok, even if you aren’t.