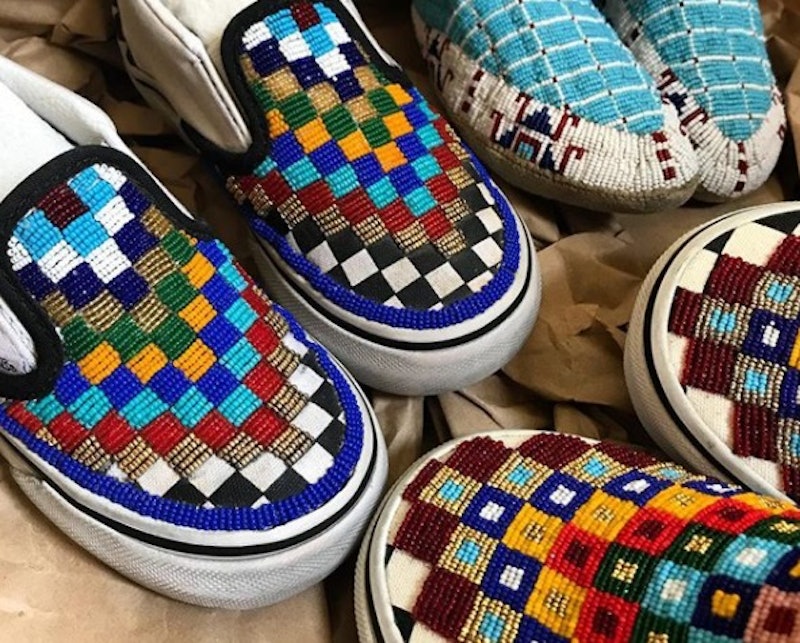 Charlene Holy Bear, a Native American artist and member of the Standing Rock Lakota Sioux Tribe, first dabbled with beading footwear a couple of years ago when she traveling with her then four-year-old son to the annual Gathering of Nations in Albuquerque, New Mexico. The pan-tribal festival is also known as “North America’s largest powwow.” And that's what inspired Holy Bear to create hand beaded Vans.

Deciding last minute to attend, she didn't really have any outfits planned for her and her family, but knew she wanted to give her son an outfit worthy of the event. Tribe members usually attend the festival wearing traditional regalia, and she wanted to give him an opportunity to participate. Looking at the Vans on his feet, inspiration struck.

Tapping into her skill with beadwork, she spent most of the road trip transforming the black and white checkered shoes with traditional Lakota designs, drawing inspiration from traditional moccasins.

"Beadwork, especially beaded moccasins have always been an integral aspect of Lakota regalia," Holy Bear shares with Bustle. "My background as a doll artist studying the material culture of my ancestors had lead to a familiarity with regional designs on moccasins. In this case, I interpreted a classic Lakota Sioux stepped design (also known as tripe) onto my son's pair of Vans that I was determined to have finished as we were driving to Gatherings.

"His pair took three days... I started them and beaded as I was carpooling, and any second I could get working in a hotel room."

They were an instant hit at the gathering, which foreshadowed the future success of her creative work.

“Once they were beaded, they had this sort of urban Indian vibe," Holy Bear previously told Vogue.. "So I braided my son’s hair, put on those shoes, and he was the coolest little guy at the powwow. People were stopping us to take photos. He made such a splash."

The photo made it onto Pinterest, and from there requests started pouring in for Holy Bear to make more custom beaded Vans.

Though her resume list is long, she says she loves creating the shoes because of how much artistic freedom they give her.

Holy Bear is already whipping up new design ideas for the shoes, and might consider expanding into apparel territory, like beading leather jackets.

"To me these Vans really represent a modern spin on native fashion,” she says.

Over the past several years, there's been a push against cultural appropriation, especially when it comes to Native Americans and how their traditional regalia is used. From Victoria's Secret and Coachella-goers being called out for wearing headdresses to fast fashion stores printing tribal patterns across sweatshirts and dresses, these instances have been deemed inappropriate and disrespectful.

These brands often use symbols and patterns without permission from the originating tribes, and take away opportunities for work from the artisans and creators in those communities. A fast fashion brand creating neo-traditional Native American earrings would be wrong because an indigenous creator, who belongs to that culture and has the right to share it, would not have as wide of a reach at a comparable cost.

By buying products directly from the communities that make them, like Holy Bear's designs, you're not only supporting Native communities with your wallet. You are taking time to understand the history from which those pieces came from — and receiving direct permission to share in their culture.

"I just love that they are supporting Native artists, especially since Native fashion is starting to showcase some really awesome designers," Holy Bear tells Bustle.

Holy Bear says more designs are on their way for 2018, so follow her Instagram and keep an eye out for her new collections. They're definitely one of a kind.