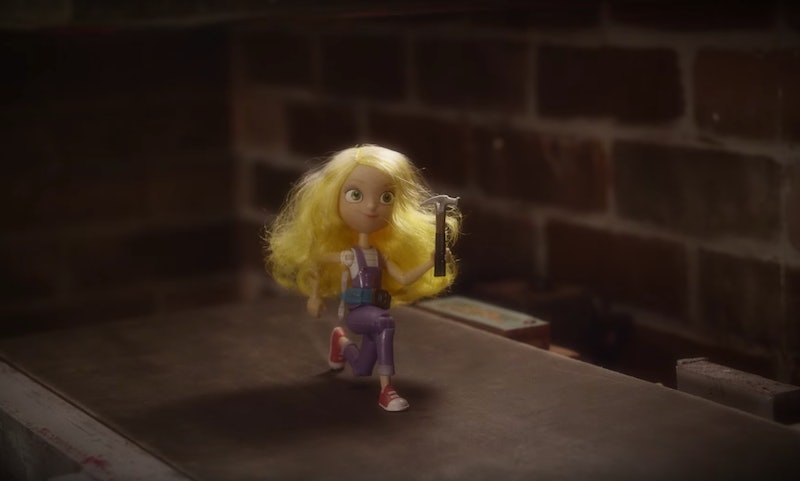 Every little girl's favorite badass action figure is back: there's now a Goldie Blox book series! Goldie Blox is the super-smart engineer figurehead of the GoldieBlox toy company, which produce "toys for future engineers" predominantly marketed at girls. In 2014, she became an action figure — armed with a tool belt and red converse, in place of the pink dresses and high heels usually seen on toys aimed at young girls. Now, Goldie Blox is the heroine of a whole book series.

The first two books in the Goldie Blox series are out now: Goldie Blox Ruins Rules the School and Goldie Blox and the Three Dares. The books are written by children's book author and mechanical engineer Stacy McAnulty — and each installment in the series will give Goldie a new challenge to solve using her passion and talent for inventing.

It's a pretty miserable truth that only 53 books on TIME's list of 100 Best Children's Books include female characters who speak at all — and even when the girls do speak, they're usually just talking about waiting for a prince to rescue them. That doesn't give young girls a particularly diverse range of role models — and that's something that the Goldie Blox book series aims to change. Goldie uses STEM to navigate problems at her middle school — and so can her readers.

In Goldie Blox Ruins Rules the School, Goldie accidentally blows the roof off her school, and along with her friends Val, Ruby, and Li, she has to work out how to rebuild it. In Goldie Blox and the Three Dares, Goldie finds her beloved Gran's book of 100 dares, with three exciting challenges left to complete. Those two are available to buy right now — and the third installment, Goldie Blox and the Best! Pet! Ever! will be released in September 2017.

The CEO of GoldieBlox, Debbie Sterling, tells Bustle that the idea for turning Goldie Blox into a book character came from a conversation with an eight-year-old girl, who told Sterling that her favorite toy was actually a book. From then, Sterling started to consider how books "provide a level of depth, story, and character development that can really spark readers' imaginations."

Goldie Blox, Sterling explains, "is a character that girls, and I hope boys, can relate to. [Goldie will] inspire kids and show them that they can be anything they want to be. She's not perfect or a genius, but she works hard and loves to learn. She fails, but she keeps trying and learns from her mistakes. She's someone you want to be friends with because she encourages you to do the same. You may still want to be a princess, but Goldie will also show you that you can build your own castle, too."