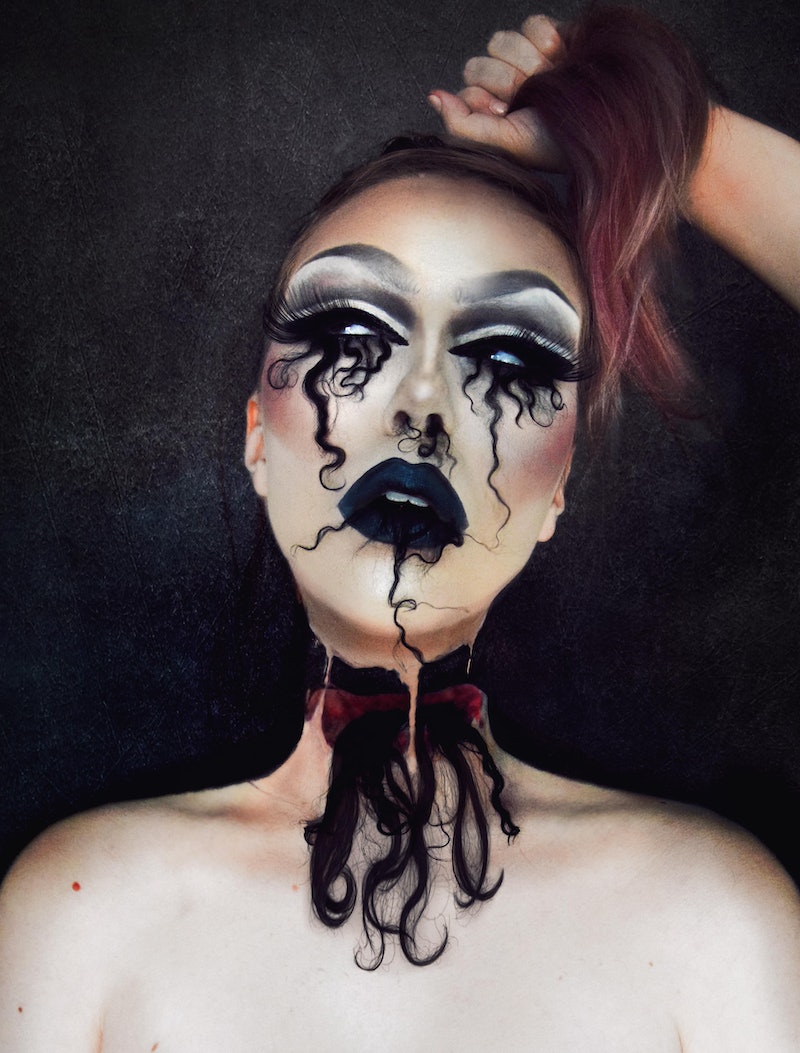 Halloween is a time to let your freak flag fly and allow yourself to experiment with creepy, out-there looks. While a lot of people are going to be diving into their makeup drawers and whipping together gruesome and clever costumes, this nostril extension Halloween look might just take the prize for most creative and terrifying cosmetics creation yet.

If you look at beauty channels on YouTube, there's no shortage of October looks that will be sure to terrify any trick-or-treaters coming to your door. From possessed demons to snarling werewolves to impressive blood-splattered looks, no one is lacking in Halloween inspo. But if you want to go more avant-garde, this nostril extension costume inspired by the viral trend no one asked for might just be the ticket.

It all started with a Reddit post, where user SilentTreatmentASMR posted a costume look to r/UnconventionalMakeup, a sub dedicated to unconventional, alternative, and counter culture makeup. The nostril extension trend has been blowing up this month, and rather than gluing a few casual eyelash wisps to poke out of her nose, she upped the ante and glued them on everywhere.

While on paper that might seem odd, the end result is actually surprisingly beautiful. She looks like something out of a person's deepest, darkest nightmare, which is just what you want for Halloween.

She attached the hairy strands to her nose, as was intended, but then she also attached them to her lower eyes and her bottom lip, making it look like some dark forces are curling out of them. Then, to take the look further, she painted on a 3D-like look, where it appeared that her neck got cleaved and is dangling together by a few pieces of skin. She then attached those same extensions to the "wound," giving off the vibe that something dark and sinister is at play.

While all of that is impressively terrifying, you also have to take a moment and appreciate the glam factor in this look. Her smoky eye is a layered and complicated look of contrasting silver and black hues, and her eyeliner is so sharp you might get cut. The contouring is fierce and slashes across her cheekbones, and one can't forget the midnight blue lipstick that she's rocking flawlessly. You can look like you're possessed, but that doesn't mean you can't have a full face on while the poltergeist takes over.

As you can expect, the reactions on the post were nothing short of stunned.

"OH MY GOD. This is SO unsettling! Fantastic work!" one user commented.

"That is disgustingly but mesmerizingly beautiful," another pitched in. "I honestly don't know how else to word that. Your skills are amazing, but the whole look with all the weird hair is unsettling."

The original viral nose hair look was created as a jab to all the weird Instagram trends we see around the internet. You undoubtedly saw the image of eyelash extensions poking out from underneath nostrils, but there hasn't been a look on this caliber yet. And if you haven't tackled your Halloween costume still, this just might be the answer.

You'll definitely sufficiently creep everyone out, bring a Tim Burton-like vibe into the room with the curling wisps, and generally look pretty undead. But as long as you have some glam makeup to balance out the gruesomeness, you are going to be the belle of the Halloween ball.

You really can't ask for more from a costume. Not many people thought they would buy into the whole nose hair extension trend. But with a creepy look like this, it's well worth hopping on the bandwagon.

More like this
30 Festive Nail Art Ideas For Thanksgiving 2022
By Summer Arlexis and Audrey Noble
Dua Lipa On YSL Beauty, Plus Her Fearless Approach To Hair & Makeup
By Erin Stovall
All The Products Hailey Bieber Used For Her Birthday Makeup Look
By Olivia Rose Ferreiro
The 117 Best Black Friday Beauty Deals Of 2022 To Shop
By Audrey Noble
Get Even More From Bustle — Sign Up For The Newsletter