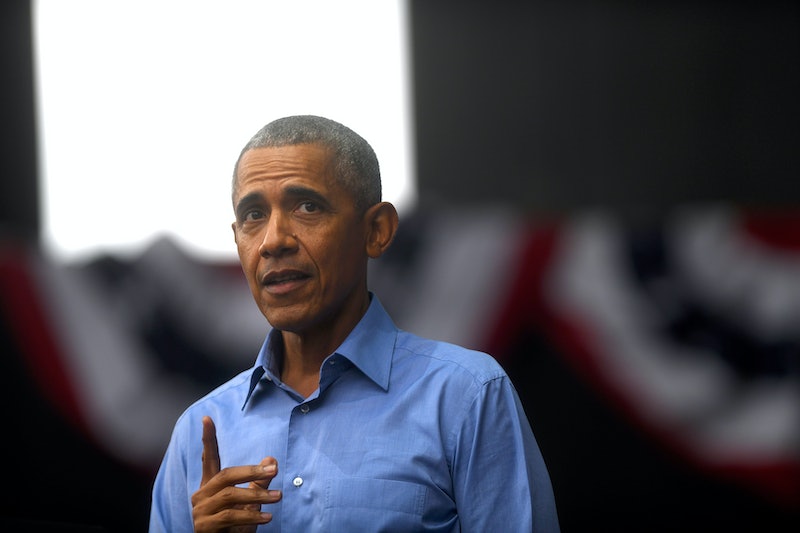 The midterms are only weeks away, and election fever is running high. In the lead up to voting day, many have been urging people to exercise their right to vote — including former president Barack Obama, whose new video about the midterm elections tears down seven excuses people give for not voting.

The exclusive video for Attn: is targeted toward millennials. "OK, is there any kind of introduction or we're just plunging in, then you guys will —," Obama asks, then stops. Then, the former president briefly jokes about Pokémon and its popularity among young people when he discusses the first excuse for not voting: "I don't care about politics."

Obama responds, "Look, I don't care about Pokémon but that doesn't mean that it won't keep on coming back. That's actually what people in power are betting on: that you'll check out, that you won't vote. And when you opt out, that's what allows other people to essentially fill that void."

Political apathy, Obama says in the video, gives politicians the power to "do nothing about the things that you'd like to see government do." If you want to nip that in the bud, Obama says that you should "throw a wrench" in such politicians' plan by heading out to vote. "Throw them out," he adds.

Obama then tackles a common complaint among young voters who wonder whether there's a point in voting if they can't relate to the candidates. "Now this is actually a good question," Obama says. "For way too long, politicians haven't been representative of America as a whole. But that's changing this year." He points to more women and LGBTQ candidates running for office, the first-time candidates, and war veterans who are all smashing records at the polls this year.

There's an opportunity to switch things up, Obama says. "This year, more than any other year, you have the chance to change the face of politics, so that it looks more like your own." Obama then refers to that moment in April when Facebook CEO Mark Zuckerberg testified before Congress, during which senators asking him basic questions about the internet.

"Here's your chance to vote for people who actually know what the internet is," Obama quips.

Other excuses included some millennials worrying that their vote may not even matter in the grand scheme of things. Obama rejects that notion in the video, saying the general election in November "actually does matter." The former president also touches upon the excuse that elections are "boring." Obama rejects that excuse, saying these elections are sometimes "more important than the presidential race."

Then there's the excuse that people don't know enough about a candidate to cast a vote. At this point, a wry Obama tells his viewers to use Google. For those who say they don't know where to register, Obama advised viewers to go to Vote.org and register.

The seventh excuse he picks apart is: "I don't have the time to vote." Obama says that he understands the potential trouble of having to vote on a Tuesday (voting day is on Nov. 6), and suggests that people make use of an absentee ballot — plus, in 37 states, people have the option to vote before Election Day. Obama jokes that it's like going to a Jay-Z and Beyoncé concert — you know, without the musicians being there.

"Take some friends anyway," Obama says. "Beat the lines because like most things, voting is more fun when you do it together."