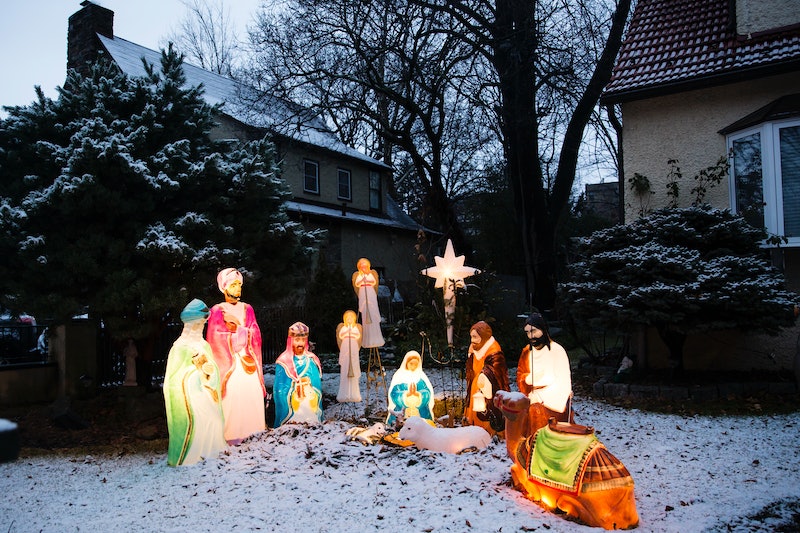 Nativity scenes are a Christmas staple, but rarely do they depict Mary, Joseph and baby Jesus trapped behind a chain-link fence. However, that's exactly what you'll see outside of the Fellowship Congregational Church in Tulsa this year. The Oklahoma church's nativity scene has drawn national attention, because doesn't merely celebrate Christmas — it also makes a pointed statement about President Trump's immigration policies.

"We've put up a fence this year as a response, maybe a provocative response, to what is an immigration crisis right now," Pastor Chris Moore of the church told Tulsa World. "There is the account of the Holy Family just after Jesus is born fleeing oppression, and migrating to Egypt. And this sort of evokes the image of, what if the same policies we have in his country existed in Egypt at the time? Would they have found themselves locked way? Would they have found themselves behind a fence?"

Trump's signature campaign issue was a proposed U.S-Mexico border wall, and although that project has gone nowhere, he's proposed or enacted many other anti-immigrant measures during his two years in office. The most notorious of them was his policy of separating immigrant children at the border and putting them in cages, which he ultimately reversed in the face of international condemnation.

In the Bible, God appears to Joseph in a dream and tells him to flee to Egypt with Mary and Jesus or suffer the wrath of King Herod, which they do. Moore told the New York Times that today's immigrants are "fleeing the same kinds of oppression and threats to their safety that the Holy Family was fleeing." So, he changed the church's sign to read “the holy family was a migrant family,” and put a chain link fence around the nativity scene.

"This Christmas, we remember that Jesus was a refugee," a sign inside the enclosure reads.

Trump's family separation policy is by no means the only anti-immigrant move he's made as president. With varying degrees of success, the president has sought to prohibit undocumented immigrants from making asylum claims in the U.S.; end the Flores settlement, which places limits on how long the government can detain immigrant children; eliminate DACA, the Obama-era program that granted temporary legal status to around 689,000 immigrant children; end the Diversity Visa Lottery, a government program that Awards visas to 50,000 immigrants a year; ban Syrian refugees from entering America; and deny federal funds to cities that don't report undocumented immigrants to federal officials, also known as "sanctuary cities."

Many of those policies prompted legal challenges, several of which were successful. On Friday, the Supreme Court upheld a temporary restraining order against Trump's proposed asylum ban, preventing it from taking effect until it makes its way through the courts. The same day, Trump initiated a partial government shutdown by pledging to veto any government funding bill that doesn't include funding for a border wall. There aren't enough votes for such a bill for it to pass the Senate, however, practically ensuring that a shutdown will occur at midnight.

In addition to its nativity scene and the sign therein, the Fellowship Congregational Church published a pro-immigrant message in a Facebook post, declaring that it's "joining with congregations all over the country standing for migrant rights at a time when we lift up the Holy Family."