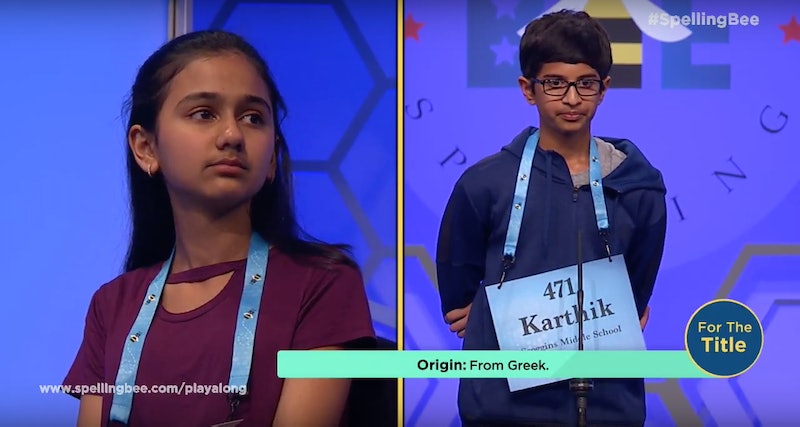 On Thursday evening, Scripps crowned the 2018 National Spelling Bee champion after an incredibly intense competition. 14-year-old Karthik Nemmani of McKinney, Texas was declared the winner after correctly spelling the word "koinonia." If you were watching the spellers compete for the national title, you know that the lead-up to Nemmani's victory featured many rounds of anxiety-laden spelling. Indeed, this one spelling bee video from the finals is almost too nerve-racking to watch.

The video features the last two spellers, Nemmani and 12-year-old Naysa Modi of Frisco, Texas, taking the stage at the end of the competition. The clip opens with Modi being given the word, "Bewusstseinslage." After asking for further information about the word while Nemmani anxiously watches from the stage, Modi spells the word incorrectly. It's then Nemmani's turn to head up to the microphone. He must spell two words correctly in order to become the national champion. Otherwise, the competition continues and Modi is back in the game.

You can feel the tension in the air — and see the very anxious looks on the faces of both Modi and Nemmani's families — as Nemmani works his way through the two words. When Nemmani spells the final word, "koinonia," correctly, the room erupts into applause, with everyone cheering for the newly-minted champion. The video shows Modi being incredibly supportive, enthusiastically clapping for Nemmani despite having a few tears in her eyes.

The competition was not only nerve-racking because of the high stakes, but also because of the intense amount of preparation — and previous spelling bee success — that it took to get to the National Spelling Bee.

For example, 2018 marked Modi's fourth stint at the National Spelling Bee, with her placement improving every year. An article from May 30 in USA Today shared Modi's preparation methods, revealing that the 12-year-old spends hours every week typing, reading, and being quizzed on words by her Dad. Modi's father, Nayan, noted that his daughter's years of competing and preparing have made her a very strong contestant. "It takes years of intense effort," Nayan told USA Today. "People who have been putting in multiple years — seriously, it makes a difference."

For Nemmani, 2018 marked his first year at the Scripps National Spelling Bee. While an extremely accomplished speller, he has never won a regional or statewide bee. Indeed, as The Washington Post reported, he actually lost his county spelling bee to Modi. Normally, not having a regional or state spelling title would have rendered Nemmani ineligible for the National Bee. However, a new program this year, called “RSVBee,” allowed certain competitors who had won a school bee to qualify for the national-level competition. This program was partially responsible for significantly increasing the number of spellers at the Scripps Bee this year. Over 500 students competed for the national title, as opposed to last year's 291.

As CBS reported, Nemmani commended Modi for her talent and competitiveness after his victory. "She's a really, really good speller. She deserved the trophy as much as I did. ... I got lucky," Nemmani said. He also described his excitement at being the new 2018 National Spelling Bee Champion. As USA Today reported, Nemmani asserted, "I had confidence, but I didn't really think it would happen. ... I'm just really happy. This has just been a dream come true."

As champion, Nemmani will take home a $42,500 cash prize, along with several other awards — including an engraved trophy. As part of his prize, he will also be featured on several national television shows, including Live with Kelly and Ryan and Jimmy Kimmel Live!

Overall, this video from the National Spelling Bee finals offered a glimpse into the high stakes nature of the intense, multi-day spelling competition. Indeed, watching the last two finalists compete for the championship is a reminder of just how challenging the Bee is — and how hard all of the spellers worked to make it to the national stage.