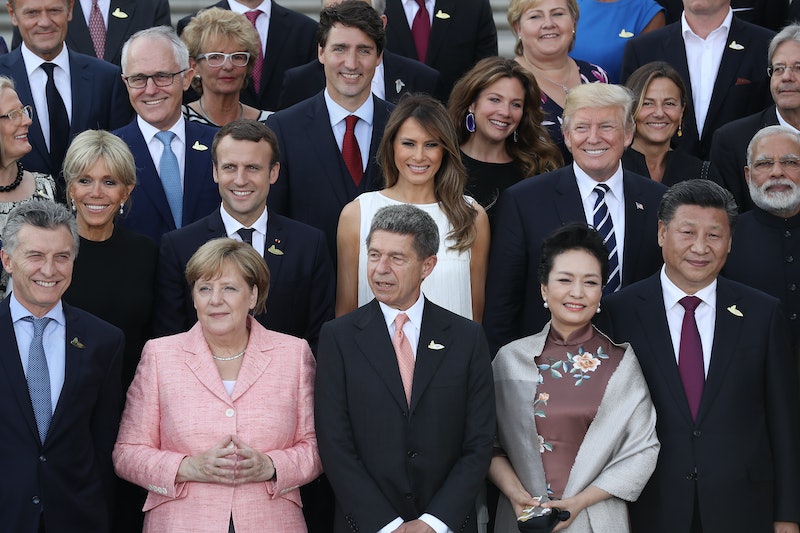 This weekend, President Trump attended the G20 summit in Buenos Aires, Argentina, meeting with leaders from around the world as they tackled pressing economic issues. Climate change was one of the main topics discussed at the summit, with many countries, save one, reiterating a strong commitment to addressing the issue. Indeed, a related Paris agreement update showed that all G20 leaders — except Trump — agree on how to diminish climate change.

As CNN described, a joint statement on climate change was released at the G20. In this statement, all member countries, with the exception of the United States, reaffirmed their commitment to fighting climate change via the Paris climate accord. The statement emphasized governmental responsibilities when it comes to combating global warming, saying (via Axios):

[Climate change] is irreversible and [we] commit to its full implementation, reflecting common but differentiated responsibilities and respective capabilities, in light of different national circumstances.

The United States did not support this statement and, instead, released its own language about climate change in the G20 communiqué. As Axios reported, the language pointedly emphasized Trump's withdrawal from the Paris climate accord — a decision the president made back in June 2017.

The United States reiterates its decision to withdraw from the Paris Agreement, and affirms its strong commitment to economic growth and energy access and security, utilizing all sources and technologies, while protecting the environment.

Trump was very vocal about his continued reluctance to support initiatives to combat climate change ahead of the G20 summit. For example, even as the federal government released a new report noting that climate change will have highly negative economic and health consequences for the country, Trump continued to express skepticism about humans' role in climate change. The president explained to the Washington Post why he doesn't necessarily have faith in the report's findings, saying:

Notably, while Trump announced that the United States was withdrawing from the Paris climate accord back in June — and has continued reiterating similar sentiments since that time — the country's withdrawal cannot actually occur until 2020. As the National Resources Defense Council explained on its website, the Paris climate agreement has stringent withdrawal requirements — and the United States can't actually begin its official withdrawal process until November 2019.

Once an official withdrawal announcement is made, a one-year waiting period must occur before the United States can formally leave the agreement. Thus, despite the Trump administration's frequent emphasis that it no longer desires to be a part of the Paris climate accord, the United States will remain a participant in the agreement until at least November 2020.

Overall, the United States' rhetoric and actions at the G20 summit certainly reflect an ongoing reluctance to support efforts to diminish climate change, something which contrasts with the approach of many other countries. Many around the world will likely closely be watching as these other countries cooperate to collectively counter climate change, while the United States pulls back from tackling the issue.