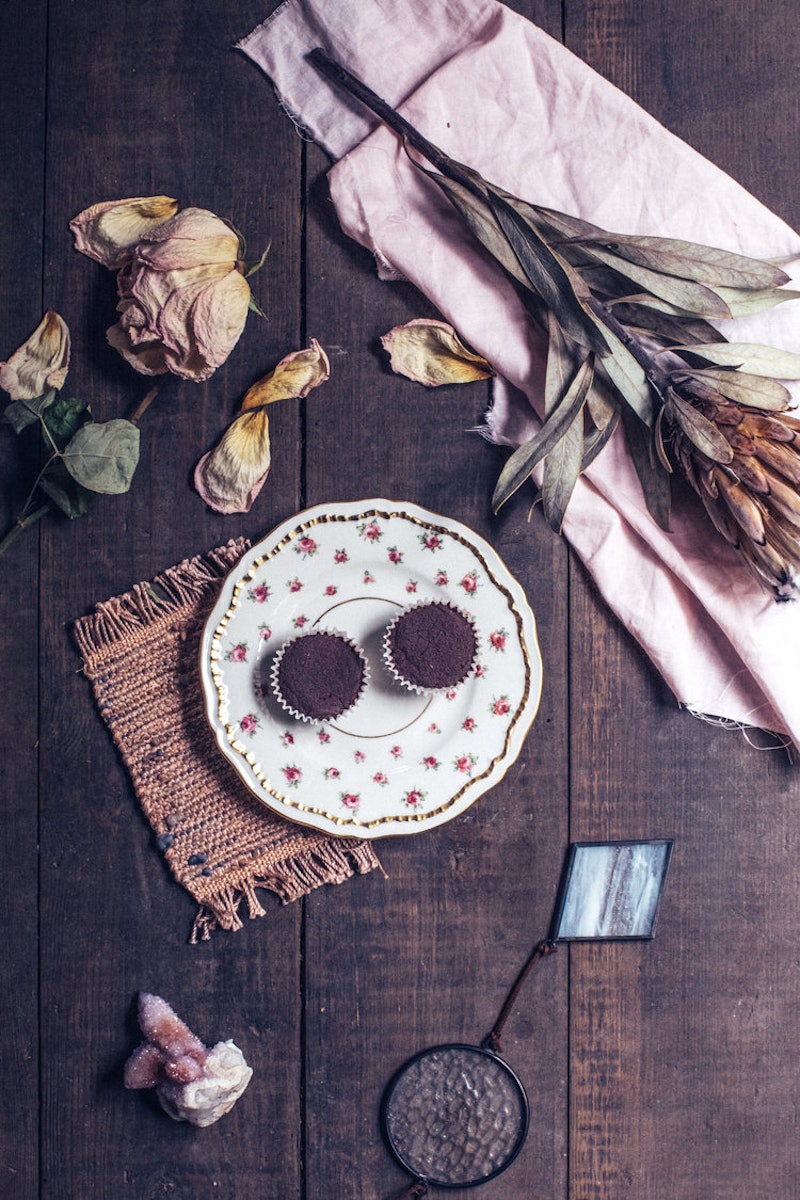 There is nothing like blood loss and a cranky uterus to make you want to shovel down baked goods from the fetal position on your bed. Unfortunately, someone has to bake those goods, and when you're cramping and miserable, it's not likely to be you. Enter the Moon Cycle Bakery, a subscription service that delivers sweet yet nutritious treats straight to your doorstep just before your period every month, so you can satisfy your cravings without lifting a finger. It's not quite the same as having warm brownies hand-delivered to you on a silver platter as you recline in bed, which I assume is everyone's ultimate menstrual fantasy, but it's a slightly more reasonable alternative. In fact, founder Devon Loftus claims the baked goods can help women balance their hormones during their period.

According to the Moon Cycle website, the idea for the subscription service come from an unexpected place: a bachelorette party. After the typical party shenanigans, she and her friends met up with the future groom later that night. Fatefully, he showed up with a three-tiered chocolate cake that was so good, one of their friends nearly cried — which she admitted may have been because her period was due to start soon. After she promised to bake a cake every month for her friend, Loftus realized that her friends couldn't be the only person to crave sweets around their period, but she felt that it was important to provide a healthy, productive alternative to the stuff found in your typical grocery store.

"The deeper we thought about it, the more important it became to nourish the people we wanted to reach as much as we supported, acknowledged, embraced and satisfied them," explains the bakery website.

After a successful Kickstarter campaign, Loftus worked with Katie Lemons of the food and health blog Twist of Lemons to put together a variety of treats "as nutritious as they are fudgy" to send to customers each month. The gluten-free Raspberry Black Bean Brownie with Primrose, for example, contains nutrients like vitamin C, iron, calcium, and magnesium to ease period symptoms like water retention and cramping. The Matcha Coconut Bites are made with chia seeds, which are high in fiber, as well as ginger, which may reduce menstrual cramping and inflammation. If neither of those appeal, Moon Cycle Bakery has teased several other baked goods, including no-bake oatmeal cookies and a sweet potato brownie, on Instagram.

You get the idea: Each baked good is made with nutrients thought to relieve the symptoms that make periods so miserable.

The bakery will officially open on Dec. 15, allowing customers to sign up for the service. First, you would create a profile listing any dietary restrictions, taste preferences, and other related qualities. Next up is downloading the period-tracking app, which also functions as a mobile store where you can choose packages, confirm orders, skip a month, and manage your subscription. It even sends notifications when you're expected to start feeling period cravings.

As far as packages go, the "full moon" costs $30 and comes with three treats of your choosing. For $23, you can purchase the "half moon" and pick two treats. A single treat, known as the "crescent moon," costs $15. Each package is available as a one-time purchase or a monthly, recurring subscription.

Although the store will open for sign-ups this month, the Moon Cycle website notes that orders won't actually send until February or March. Until then, you can try out the gluten-free brownie recipe Loftus shared with Well and Good — or stick with your regularly scheduled monthly decadence. See you in the ice cream aisle.