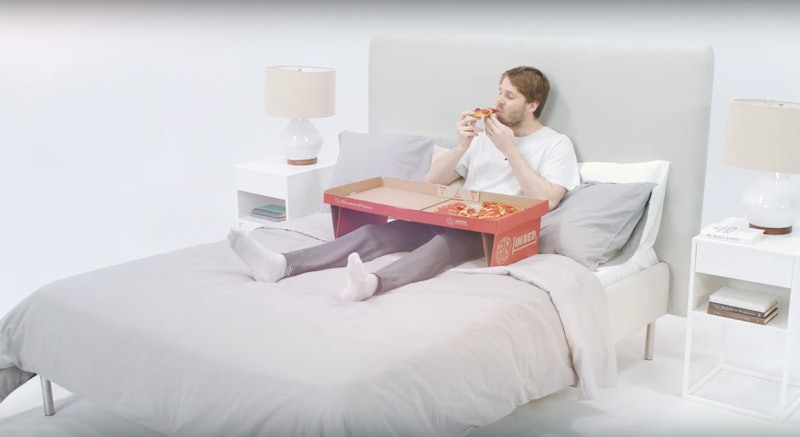 Pizza is the perfect food. A tomato sauce and cheese pizza in itself is perfection for the tastebuds, but a plain pizza also is like a blank canvas. The topping possibilities are innumerable. But the best part of pizza? The leftovers. If you can't finish the pizza you ordered in one sitting, it is actually ideal — cold pizza is an underrated breakfast. But, signs are pointing towards a shift in attitude about pizza for breakfast. The first sign? A pizza box designed for eating in bed, aka the truest feat of pizza engineering yet known to humankind.

The box is the masterwork of company Boston Pizza. While that is a city in Massachusetts, this box was actually designed by New England's neighbors to the north — Canadians! Officially named BP in Bed, the box is constructed of typical cardboard but can be unfolded and reworked to create a tray table. If you're intrigued, you can enter a contest through the company's Twitter or Facebook accounts, but be careful to make sure you are eligible to take part! Right now only Canadian residents over age 18 are able to potentially go home with a BP in Bed in hand. Sound like the best Father's Day gift EVER? One would hope, as that is the official reason for the giveaway.

Here you can get a glimpse of the pizza box in action. Who knows? Maybe it will inspire you to come up with your own version and achieve this kind of greatness with other food genres, too.

Pizza-themed Father's Day gifts need not be limited to Canadians, though. While the BP in Bed is not available in the United States *yet* there are countless other pizza gifts you can snag for the pizza-loving dad in your life (or, y'know, yourself — because aren't we all just walking dad jokes at heart?).

If you're into the functional fashion unique to dads (dadshion?), you're bound to love the idea of wearing a piece of pizza. This triangular necklace/holder/pouch was designed to fit a slice of pizza, so even when your hands are full your dinner can be close by. The pizza pouch made headlines originally in 2015 whilst being sold by aptly-named company, Stupid Idiotic. Though the company's domain name appears to have expired in the three years since, you can still snag a pouch from its shop on Amazon. It only costs $4.99 to have a slice at arm's reach anytime.

Speaking of ~dadshion~, it would be remiss not to mention that we live in a world were there are pizza sneakers. What are pizza sneakers, you ask? Well, they're very similar to what their name describes, and cuter than you might initially imagine.

Fifty pairs of Pizza Hut's Pizza Pie Tops were released in March of this year as part of a collaborative promotion between Hypebeast and Pizza Hut (naturally). Clearly these shoes adhered to the idea of going big or going home, because they weren't only footwear, but were equipped with Bluetooth technology that enables the person wearing them to — wait for it — order a pizza using their shoes.

The future is truly now. The release was meant to celebrate March Madness, the tournament each NCAA basketball team partakes in every year. But, no matter what your opinions are about collegiate basketball, there's no denying pizza shoes are next level.

Non-Canadian pizza-lovers may have to wait for the day that they can turn their beloved pizza box into a table, but if you're part of the lucky population who qualifies for Boston Pizza's BP in Bed giveaway, godspeed and good luck — as for the rest of us, we can just continue eating pizza with our bare hands in the doorway as soon as the delivery person drops it off, the way nature probably intended.