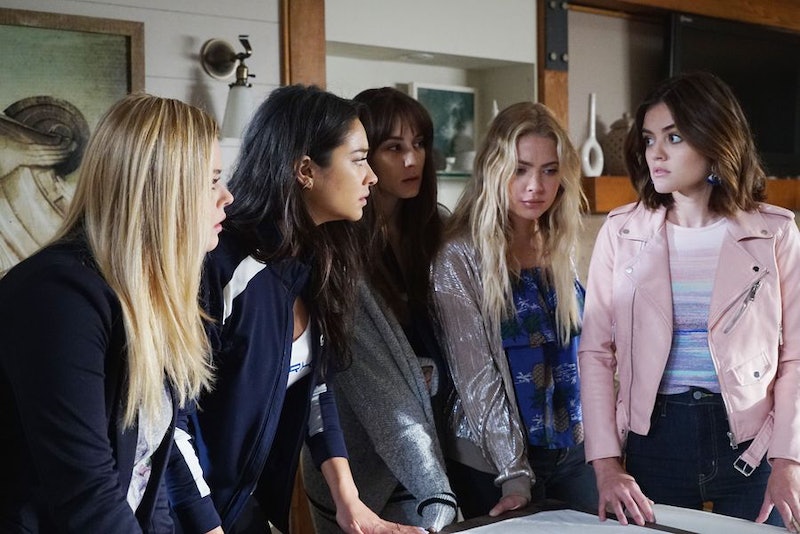 Watching Pretty Little Liars requires a certain suspension of disbelief. It's safe to say that Ali, Aria, Emily, Hanna, and Spencer face a particularly, uh, unique set of problems during their teens and early 20s. But, when they're not attempting to stay one step ahead of A, these are relatable young women. And another aspect of the show is relatable, too — the characters on Pretty Little Liars don't "just tell an adult" about the bullying and torture for completely understandable reasons. In fact, the series makes a strong point about why so many girls and women are hesitant to tell an authority figure when they are bullied or the victim of a crime.

When the series begins, the Liars are 16 years old and, even before A strikes, they're probably at least a bit traumatized and scared by the disappearance and supposed murder of Ali. Although I'd venture a guess that most viewers haven't been relentlessly stalked by a faceless stranger in a black hoodie who knows all their deepest, darkest secrets, I think it's safe to say that many members of this demographic have been bullied by classmates. And, unfortunately, many teens and young women are victims of harassment and physical and verbal abuse — often at the hands of their classmates and peers.

According to Live Science, teens tend to not tell an adult because they're afraid the bullying or abuse will escalate — and that's a major part of the reason the Liars stay silent. Furthermore, A (whether it's Mona, Charlotte, or Uber A) uses their secrets against them and threatens to reveal their ugliest truths. So the theory that everything would have been A-OK back in Season 1 if only they'd just "told an adult" doesn't hold up any more than my theory that Wren, not Charlotte, was behind that mask.

Of course, sometimes adults do get involved — and the Liars are repeatedly failed by the authority figures in their lives. Aside from Ashley, Ella, and Wayne (R.I.P.), the parents on Pretty Little Liars aren't going to be up for any "Mother or Father of the Year" awards any time soon. And, the Rosewood PD is so inept and corrupt that they've spawned a wealth of inside jokes amongst Pretty Little Liars fans — but starting from the very first episode, it's made clear to the Liars that they're viewed as suspects, not victims.

After the interrogations they endure regarding Ali's disappearance and murder, it's pretty understandable that they chose not to go to the police when those creepy texts began showing up on their cell phones. And, even though the girls' captivity and rescue from the Dollhouse provides hard evidence that they're indeed victims, Detective Tanner remains determined to see the worst in them.

So, instead, the Liars stick together — with a few exceptions, of course. (Looking at you, Aria.)

It's typically not safe for them to go to the police or "just tell an adult," so the Liars take matters into their own hands — with varying degrees of success. Although one Liar occasionally goes rogue (Spencer briefly went undercover and joined the A team, and Aria recently pulled a similar stunt), the young women typically make all decisions regarding A together. Even if they have differing opinions at the outset, they reach agreements about how to handle each situation. And, since going rogue never really proves to be a success, the show illustrates that not only are girls and young women capable of solving their own problems, but there's strength in numbers — and they always fare better when they work as a team.

The old "just tell an adult" trope tends to be uttered by people who have never been in the situation they're judging. I'm happy to report that I've never been stalked by a masked stranger, held captive for weeks in a Dollhouse from hell, or been wrongfully impregnated. But, like so many other young women, I've been in situations where people have condescendingly asked why I didn't just go to the police or at least tell an adult.

I'm certainly not saying that anyone, female or male, should stay silent if they've been the victim of a crime. And I'm definitely not saying that the majority of the crimes committed on Pretty Little Liars are realistic. I strongly believe we need to strive for a culture where victims of every transgression, from cyberbullying to assault, feel safe and supported coming forward. But that's not the reality — and criticizing someone for not telling an adult? Well, that's victim-blaming at its finest — and it's the very reason that so many people don't speak up in the first place.

More like this
UK Viewers Will Have To Wait To Watch The Handmaid’s Tale S5
By Maxine Harrison
Mike Flanagan Teases 'The Midnight Club' In This Exclusive, Creepy Clip
By Grace Wehniainen
Caleb McLaughlin Details Racism From 'Stranger Things' Fans
By Radhika Menon
'Grey's Anatomy's New Intern Got Advice From Dr. Bailey Herself
By Grace Wehniainen
Get Even More From Bustle — Sign Up For The Newsletter