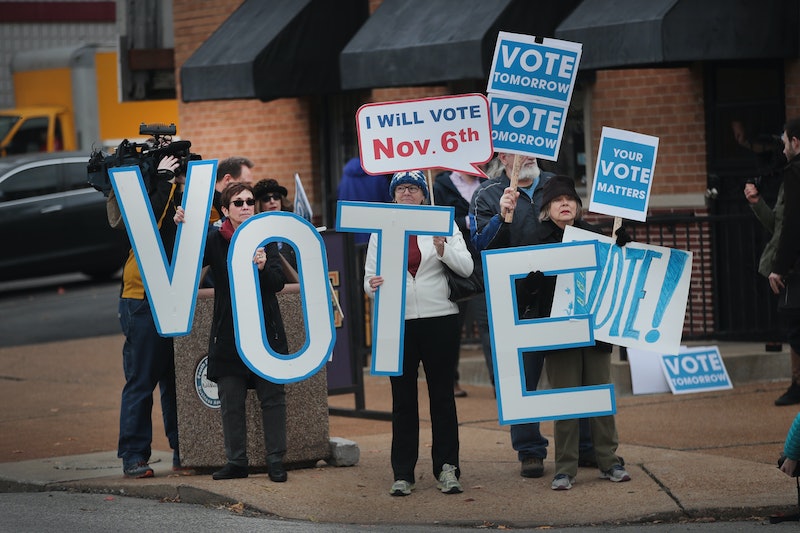 If you're still deciding on who to vote for Tuesday, there are a number of tools that can help you research the candidates on your ballot and their positions. But one has put together endorsements from key progressive groups — and the NRA. The result is a progressive voter guide with endorsements relating to abortion rights and gun rights spelled out, letting you make informed decisions if either issue is important to you.

The tool was put together by #VoteProChoice to make it easier to identify candidates who would advance abortion rights in particular, and they have included the NRA's endorsements as an organization that runs counter to that mission. That in turn makes this a helpful tool if you're for gun control, too.

Which exact groups show up depends a bit on where you live. There are a large number of organizations whose endorsements will likely show up, though. Among them are MoveOn, EMILY's List, NARAL Pro-Choice America, and Run for Something. Then statewide organizations appear, too, like Planned Parenthood Voters of Iowa PAC and Iowa Right to Life for races in the state of Iowa.

#VoteProChoice also endorses its own candidates, about 300 nationwide, "in critical races where reproductive rights are under threat," the group's website reads. In addition, it also "recommends" more candidates based on their positions. The #VoteProChoice endorsements and recommendations are the first two columns that show up in the guide.

If you decide that you want to vote for one of the candidates based on the recommendation and endorsements you find in the guide, it's easy to keep track for later. You can add candidates to your ballot and then retrieve that list later when it's time to vote.

In addition to candidates, you can find information on ballot initiatives that would have an impact on abortion rights. The idea is that in addition to voting for abortion rights advocates on the top of the ticket, you can make informed decisions all the way down the ballot.

If you have any questions, you can check out the voter guide's FAQ. It includes longer entries to help you understand the endorsements and recommendations, and it also answers simple questions like how to figure out if you're registered, or what different positions are for.

The key thing to keep in mind between now and heading to the polls is your plan to vote — when, where, and how you'll get there. Incorporating this tool into that plan might that plan go a bit smoother, especially when you're inside the voting booth.