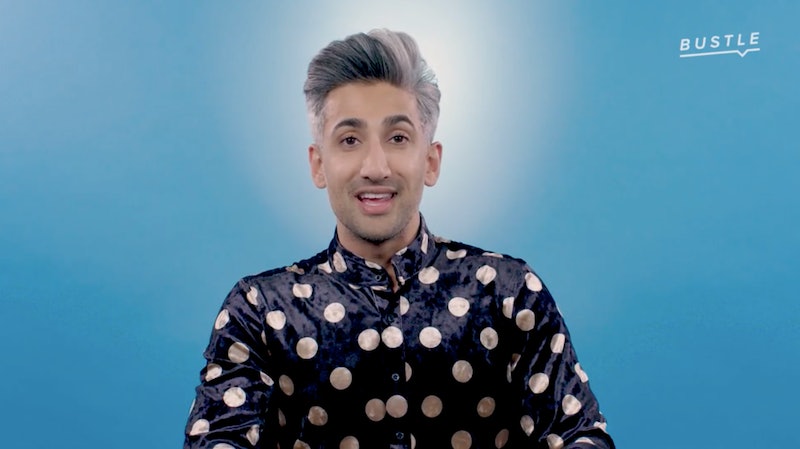 In honor of Pride Month, the Queer Eye cast shared their coming out stories in an exclusive video for Bustle. And just like the guys themselves — Antoni Porowski, Tan France, Karamo Brown, Bobby Berk, and Jonathan Van Ness — their stories are all very different. "I don't think that anybody should judge anybody's coming out story," Antoni says, revealing that this is only the second time he's told his coming out story publicly.

Porowski's right — no one should judge these stories, which are extremely personal and can be difficult to share. So when people are brave enough to share theirs, we should just listen. These anecdotes can show others in the LGBTQ+ community, who maybe haven't felt comfortable telling their own stories yet, that they're not alone, even if it sometimes feels that way.

For France, Queer Eye's fashion expert, he worried that he would be disowned by his religious Middle-Eastern family for being gay. "It's not a lifestyle that is common," says France, who's currently writing a memoir that will delve into his coming out story, in which, at the age of 34, he told his Muslim family he had been married to his partner for over a decade.

Meanwhile, Queer Eye's resident interior designer, Berk was outed to his devout Christian family, who wasn't initially accepting of his sexuality leading him to "pick his bags up and walk right back out the door."

"My coming out story is still happening today," Brown, Queer Eye's culture expert, explains. In the same video, Porowski admits when he first got his job on Queer Eye he was embarrassed to say the title of the show, whispering "queer" when people would ask. "The word 'queer," Porowski says, "I used to say with such shame. And now I say it with more pride."

What the guys prove is that coming out isn't one day or one story; it's a process, and it's one that freed them from being anyone else besides themselves. "I am who I am and I always had to be who I was," Van Ness says of coming out when he was 8 or 9 years old.

That's right, you do you. And that's the message the Queer Eye guys wanted to send to anyone who's still deciding whether or not to come out to their friends and family. It's not always easy, but for them it was an important step in letting the world know who they are. And as Berk says, "We aren't any different than anybody else."

Clearly, the world loves Porowski, France, Brown, Berk, and Van Ness just they way they are and wants to see more of them. Queer Eye Season 2 returns on June 15, hopefully with an episode dedicated to Tom and Abby's wedding.

For this new season, the guys are returning to Georgia to connect with "communities from a wide array of backgrounds and beliefs often contrary to their own, touching on everything from self-love and faith, to immigration and how to make the perfect homemade poke bowls and more," according to a Netflix statement.

So, yes expect more cooking from Porowski, who is releasing a cookbook next year with his signature Queer Eye recipes that will most definitely feature avocado. But, the new season of Queer Eye will also "break from tradition," according to Entertainment Weekly, adding eight new episodes, including ones that feature "the show’s first female and first trans male subjects."

Can you believe they are going to do that to your poor tear ducts? Definitely buy some extra tissues because clearly, you're going to need 'em — as if that should be any surprise to those who bawled their way through the first season. Not to mention, the video above, which will have you reaching for the Kleenex to wipe away those tears. Happy ones, of course.

More like this
Everything Jarrette & Iyanna Have Been Up To Since 'Love Is Blind'
By Brad Witter
Christine Quinn’s 'Selling Sunset' Future Is *Finally* Confirmed
By Bustle Staff
What's New On Netflix: A Third '365 Days' Movie & Lili Reinhart’s New Film
By Arya Roshanian
'Indian Matchmaking's First British Cast Member Knows *Exactly* What She Wants
By Shahed Ezaydi
Get Even More From Bustle — Sign Up For The Newsletter