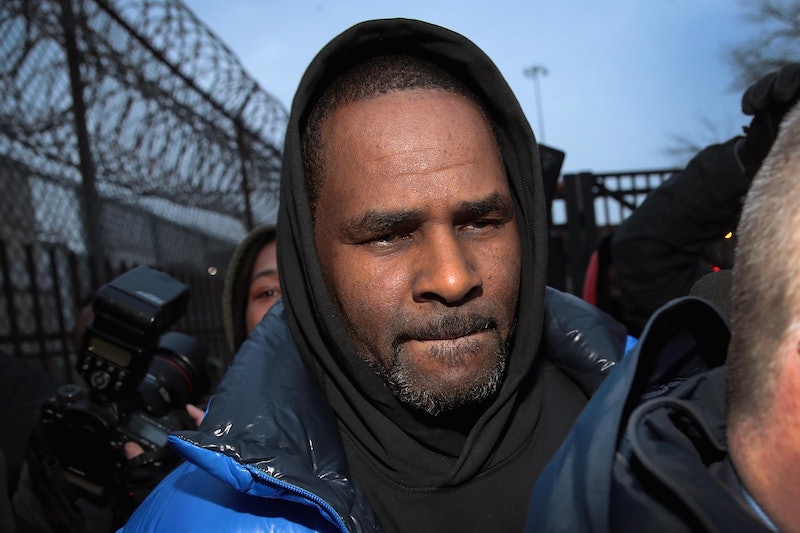 Over a week after being arrested and charged with 10 counts of aggravated criminal sexual abuse, R. Kelly gave an interview to CBS that will air in full on Wednesday and Thursday mornings. In the interview clip released by CBS on Tuesday, Kelly maintains his innocence. Throughout the clip, journalist Gayle King asked Kelly direct questions about the allegations laid against him.

Last week, Kelly pleaded not guilty in response to the charges, according to the Associated Press. His bail was set at $100,000 dollars. He was released from jail after three nights behind bars when a friend, a woman named Valencia Love, paid his bail. Later, she said to ABC on Feb. 26, "It was his own money. I just posted bail for him."

Kelly replied that there were certain things he couldn't speak about, due to his ongoing case. "But," Kelly said, "I will tell you this: people are going back to the past ... "

"But the past is relevant with you with underage girls?" King argued.

"Absolutely, no it's not," Kelly argued. "Because for one, I beat my case. When you beat something, you beat it."

Still, King continued to push him on the allegations that several young woman have made against him. "This is what they're saying about you," King said. " ... These aren't old rumors."

In another section of the interview that was released by CBS, Kelly began crying. That interaction started with King asking him to clarify whether he had ever held anyone against their will, to which Kelly said, "I don't need to. Why would I?"

As he grew visibly distressed, Kelly continued, "How stupid would it be for R. Kelly, with all I've been through in my way, way past, to hold somebody, let alone 4, 5, 6, 50, you said – how stupid would I be to do that?"

Kelly continued to speak over King. He said, "That's stupid guys!" before pointing at the camera and saying,

That's stupid! Use your common sense. Forget the blogs, forget how you feel about me. Hate me if you want to, love me if you want. But just use your common sense. How stupid would it be for me, with my crazy past and what I've been through – oh right now I just think I need to be a monster and hold girls against their will, chain them up in my basement, and don't let them eat, don't let them out, unless they need some shoes down the street from their uncle!

"Stop it," Kelly said, as King repeatedly said his name in an attempt to interject. He ignored her and said, "I didn't do this stuff! This is not me! I'm fighting for my f*cking life!"

You can watch the full interview when it airs on CBS Good Morning on Wednesday and Thursday.